A great movie can cross age gaps, bind communities, and influence generations. We have all bonded with a new friend over our favorite childhood movies or relived the magic of the films that shaped us again and again as an adult. With lovable characters, thrilling stories, and powerful lessons these movies are sure to stir your imagination and will continue to pass the test of time.

So, sit back, relax, and binge (at your own risk). 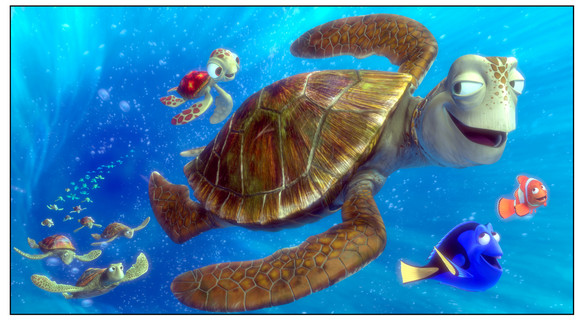 In a tale of adventure, freedom, and redemption, “Finding Nemo” takes us to the Great Barrier Reef, where Marlin (Albert Brooks) is struggling with accepting the independence of his tiny-but-brave son Nemo. When Nemo is accidentally swept away far, far from home and into a fish tank in a dentist’s office, Marlin recruits the help of the lovable but forgetful Dory (Ellen Degeneres), as the two set out into the vast ocean in search of Nemo. With an all-star cast, a great storyline, and quick-as-a-whip comedic moments, we highly recommend this Pixar classic for the whole family.

Why we love it: “Finding Nemo” is the best type of movie because it carries lessons for the young viewer as well as the adult viewer. Nemo is a small and vulnerable fish, but he craves his independence. His dangerous adventure across the ocean shows him that he should trust his parents more, but also that he can trust himself more too. Marlin is overprotective, and Nemo’s disappearance represents every parent’s nightmare. Trekking across the ocean in search of his son teaches Marlin both to accept that he can’t control everything and that he’s a great dad for the things that he can control.

As the quintessential summer adventure film, “E.T.” has a big reputation to hold up. And it consistently delivers in the form of a sci-fi thriller that hovers right in the liminal space where youthful independence is born. “E.T.” introduces us to the ever-imaginative Elliot (Henry Thomas), a boy living with his single mom (Dee Wallace), his older brother Michael (Robert MacNaughton), and younger sister Gertie (played by the adorable Drew Barrymore). When Elliot makes contact with a wholesome alien who was left behind on a visiting mission, he sets out on a mission to return the alien to its home, but not before he learns how to communicate telepathically and dodges government scientists in the process.

Why we love it: “E.T.” is the original friendly alien flick – the first time we are confronted on the big screen by a huggable monster. “E.T.” shows us how to behave with love and compassion when dealing with something or someone different from us.

Anna is brave and optimistic, determined to find her sister and lift the spell that leaves her kingdom under an icy glaze. Anna (Kristen Bell) is aided by a mountain man named Kristoff (Jonathan Groff), his reindeer Sven, and an adventurous spirit, as the three face mountainous obstacles and cold magic as they search for Else (Idina Menzel) and attempt to rescue the kingdom.

Why we love it: “Frozen” shows us the lengths that family will go to be there for one another. Plus, “Let it Go” has been on our playlists since the movie came out. Don’t judge us. 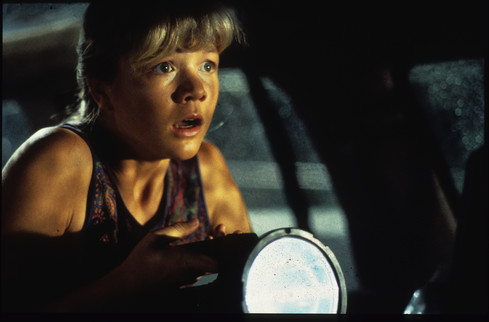 What happens when the curiosities of man come back to, well, bite him? A summer blockbuster, apparently. “Jurassic Park” is the childhood science thriller of our wildest dreams – a cinematic tour de force from Steven Spielberg and Universal Pictures. A couple of paleontologists are taken on the adventure of a lifetime by their billionaire research sponsor, who invites them to his remote Costa Rican island to gain their official endorsement for his latest project: a dinosaur theme park. When a weekend storm and some insider corruption turn the daring weekend into a fight for their lives, the audience faces what would happen if dinosaurs and humans occupied the same island, all behind one of the most classic film scores of all time.

Warning: This one is rated PG-13 for its intense suspense and terrorizing dino attacks. Watch with caution and a big tub of popcorn.

Extra Dino Credit: The Definitive Ranking of Every Dinosaur from the ‘Jurassic Park’ Films 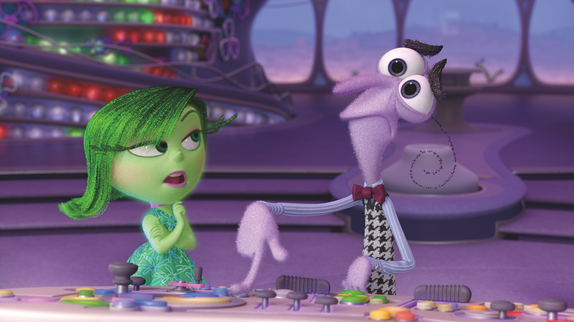 We’ve always wished we knew just a little bit more about what’s going on inside our hearts and minds, and no one gets that more than the creators of “Inside Out”. Riley is going through a lot of changes, as she just moved from the midwest out to San Francisco where her dad started a new job. Joy (Amy Poehler), Fear (Bill Hader), Anger (Lewis Black), Disgust (Mindy Kaling) and Sadness (Phyllis Smith) all take turns telling Riley how to feel as Riley navigates the new world around her. And they don’t always get along.

Why we love it: “Inside Out” gives simple imagery to an invisible experience—we all have emotions, but how often do we give them personalities? It’s a great movie to teach young children about how they feel and why they feel it.

Miguel is out to prove his talent and to become exactly like his idol Ernesto de la Cruz. When some otherworldly events cast Miguel (Anthony Gonzalez) into the colorful and magical Land of the Dead, he sets off to uncover the secrets behind his family’s generations-old ban on music, aided by the lovable swindler Hector. Through passionate storytelling, heartstring-tugging emotional moments, and great songs, “Coco” shows us that we could all use a little help, especially from family.

Why we love it: Pixar has gotten the tear-jerker down to a science, but they nailed it with “Coco”. When Miguel’s Abuelita lights up at the end of the movie – you’ll know what we mean – try holding back your happy tears. We dare you.

When Smalls moves to a new neighborhood after his mom remarries, his highest hopes are finding some new friends and learning how to play baseball. When he ends up being befriended by a kid prodigy and the neighborhood hero, Smalls’ life changes from boring to thrilling all in one legendary summer. With a classic cast, a timeless story, and adventure that’ll feel familiar to any kid who grew up in the suburbs, “The Sandlot” is a classic film for any audience that just so happens to star a bunch of kids.

Why we love it: Everyone’s been the new kid, and everyone grew up with neighborhood tall tales. “The Sandlot” combines it all into a classic story that’s as believable as it is unbelievable, making the perfect evergreen summer flick. 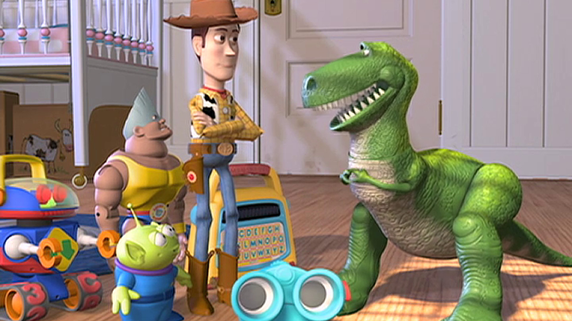 As the first in a 4+ part franchise, “Toy Story” introduces us to Woody (Tom Hanks), a pull-string cowboy who is the top toy in the collection of Andy, an imaginative little boy. As top toy, Woody is often the liaison between Andy, Andy’s mom, and the rest of the toy clan, translating important messages and putting everyone’s anxieties at ease when new plans or new toys are introduced. Woody finds his world shaken, however, when Andy is gifted with Buzz Lightyear, the newest, coolest, gadget-iest toy on the market. Woody plots to eliminate Buzz (Tim Allen), but only after finding themselves in the clutches of the evil toy torturer Sid do the two toys forge a genuine friendship and learn to rely on one another to make it back home.

Why we love it: Learning how to resolve our differences is a skill that even adults could use some more practice in. Woody and Buzz are forced to learn to view each other as allies rather than threats, and they learn a lot about the value of community, trust, and friendship in the process. 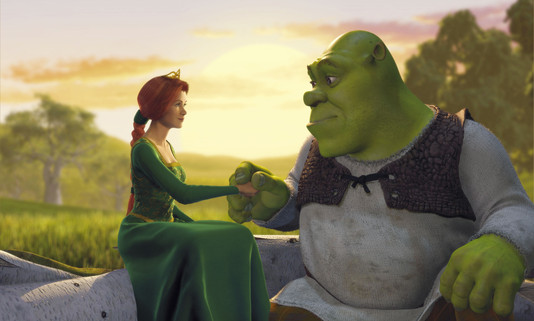 When the evil Lord Farquaad (John Lithgow) banishes all fairy tale creatures from his kingdom to a nearby swamp, he unknowingly places them right on the home of the cranky recluse Shrek, a loner ogre (Mike Myers). When Shrek discovers that these fairytale creatures have overrun his beloved land and home, he vows to make it right as the unassuming people’s hero, but mostly as an ornery homebody who wants the privacy of his swamp back. Lord Farquaad accepts Shrek’s service, and with his sidekick, Donkey (Eddie Murphy) sends him off to a faraway land to rescue Farquaad’s would-be wife, a princess named Fiona (Cameron Diaz) who has some magic and secrets of her own.

Why we love it: Mike Myers hasn’t made us laugh this hard since the original Wayne’s World, and we’re thankful for it. And Eddie Murphy as Donkey? It’s no wonder they’re still making new Shreks—we can’t get enough!

Eccentric and mysterious candy smith Willy Wonka (Gene Wilder) has hidden five golden tickets in five of his delicious top-selling candy bars. Whosoever discovers one of these golden tickets will win a free tour of the mysterious “Willy Wonka Chocolate Factory”, in addition to a lifetime supply of candy. When four incorrigible brats show up with the tickets, along with one shy and lovable Charlie Bucket (Peter Ostrum) and his lovable Grandpa Joe (Jack Albertson), Wonka sets clear ground rules for the tour – only to dole out bizarre and cruel punishment when those rules are broken. In the end, only Charlie remains, but on the way, we learn about human nature and what happens when those with too much manage to bite off more than they can chew.

Why we love it: If watching candy being made is almost as satisfying as eating candy, then Willy Wonka gave us all an instant sweet tooth. The opening cinematography alone is worth the watch, let alone the bizarre mishaps between aloof Wonka’s victims, or rather, “guests.”