During college football season fans of all kinds come together to share their opinions, spirit and loyal fandom over snacks. Maybe you’re a rabid fan of your alma mater. Maybe you follow your hometown team, or maybe it’s not up to you, maybe your kind of college football fan is laid out in the stars.

What kind of college football fan are you? See what your zodiac sign has to say about it. 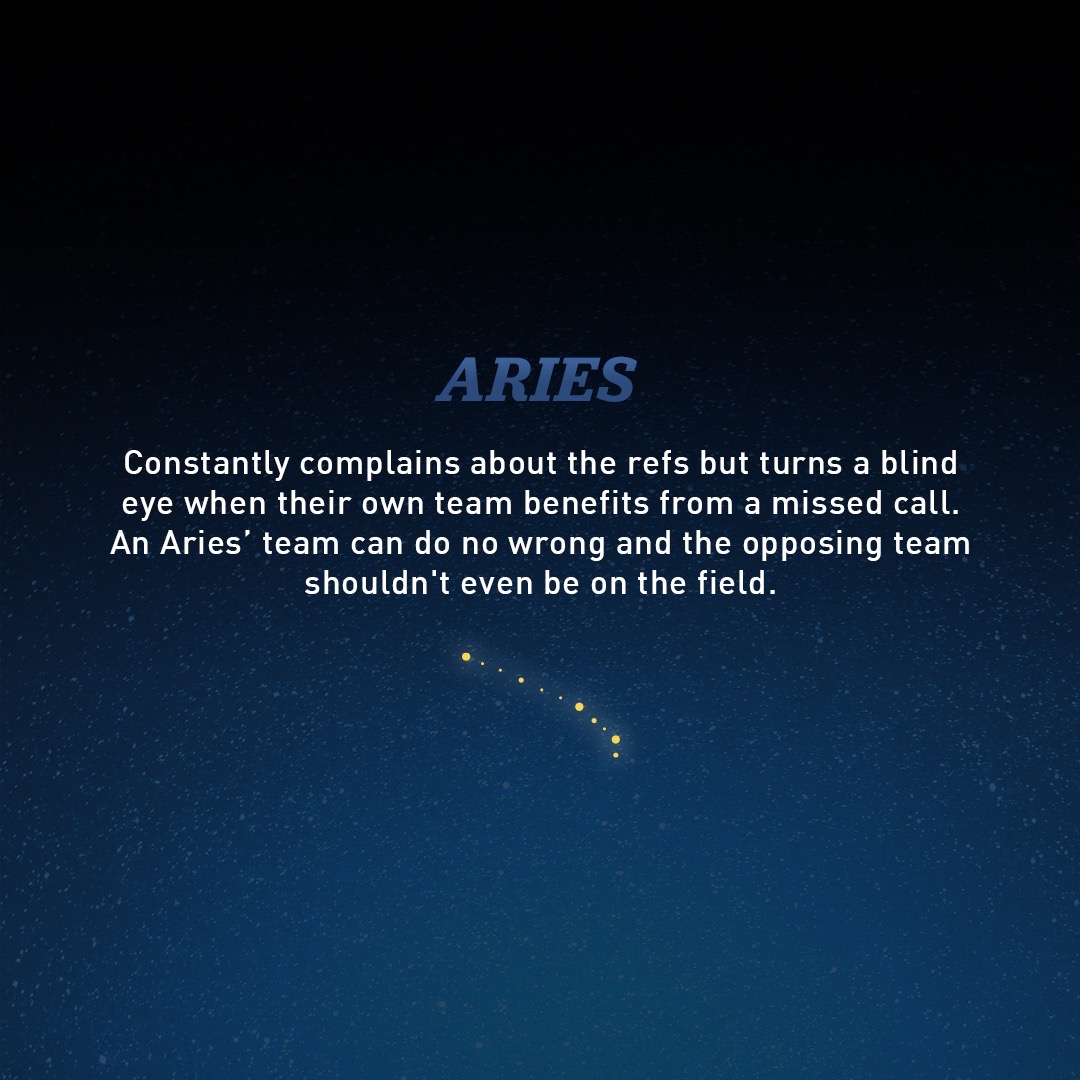 When you’re an Aries, your team is the best of the best, no matter which team that is or how they’re playing. It’s the refs that are the problem, and the other team, and the fans…you get the point. 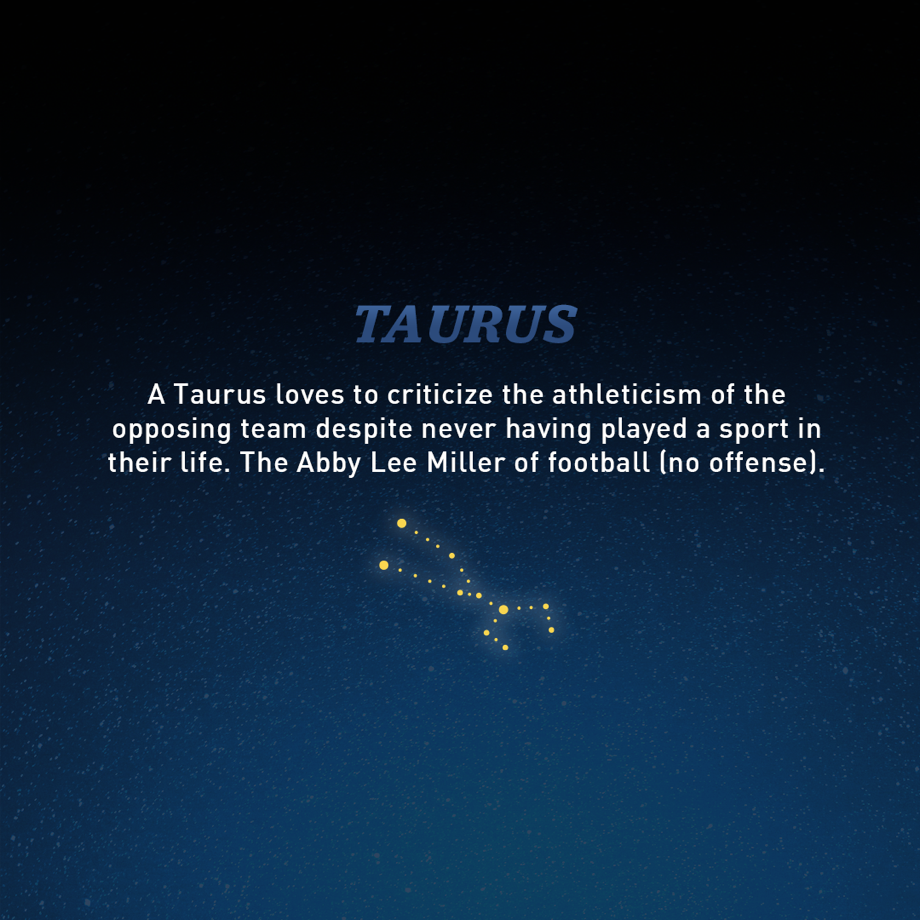 The bullheaded Taurus has a lot of critique to offer, but not much to back it up.  But when it comes to watching college football, they’re the best athlete in the building. 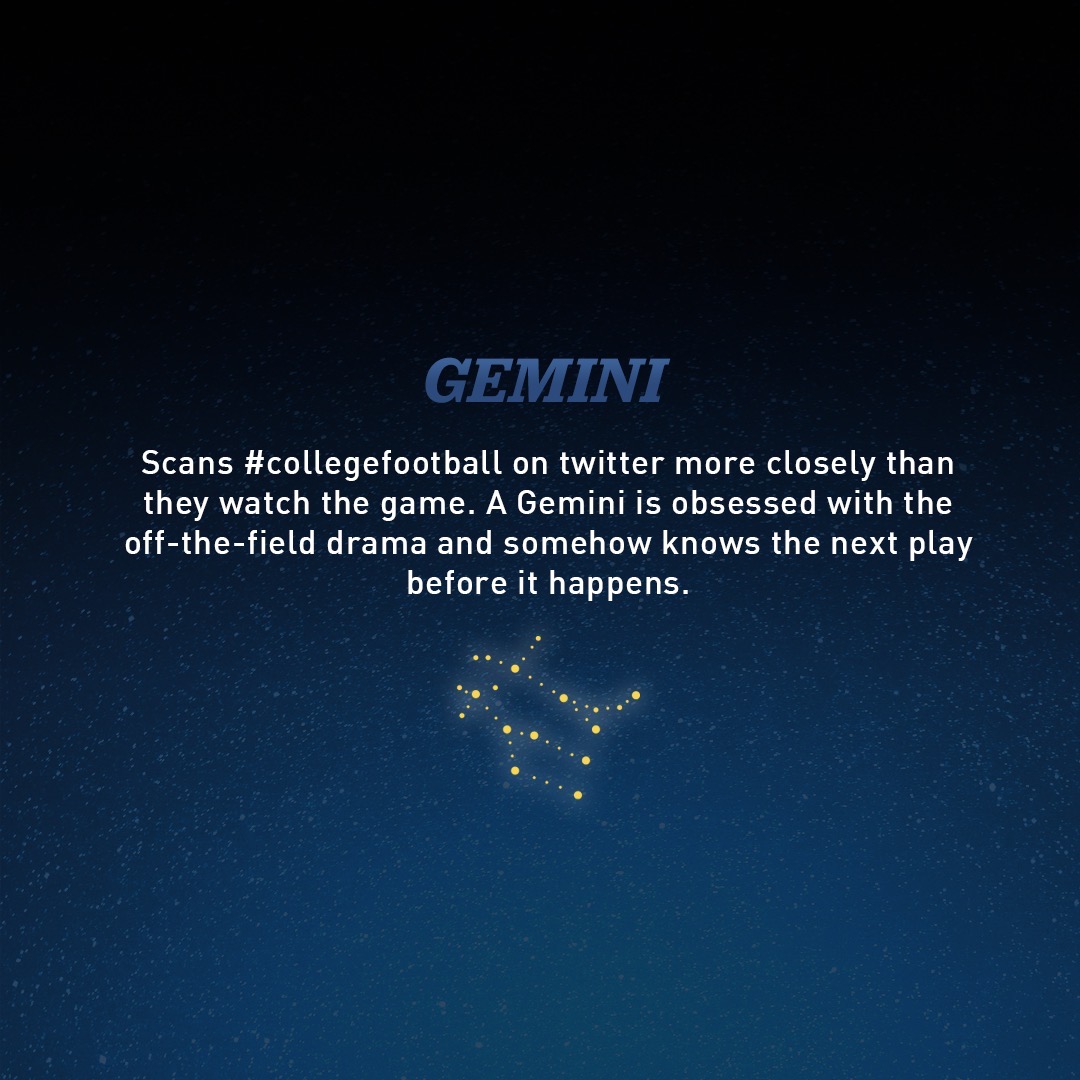 The ultimate multi-tasker, a Gemini can watch the game and feverishly peruse Twitter at the same time. Want to know a player’s backstory and hear a prediction about the game’s conclusion? Look no further. 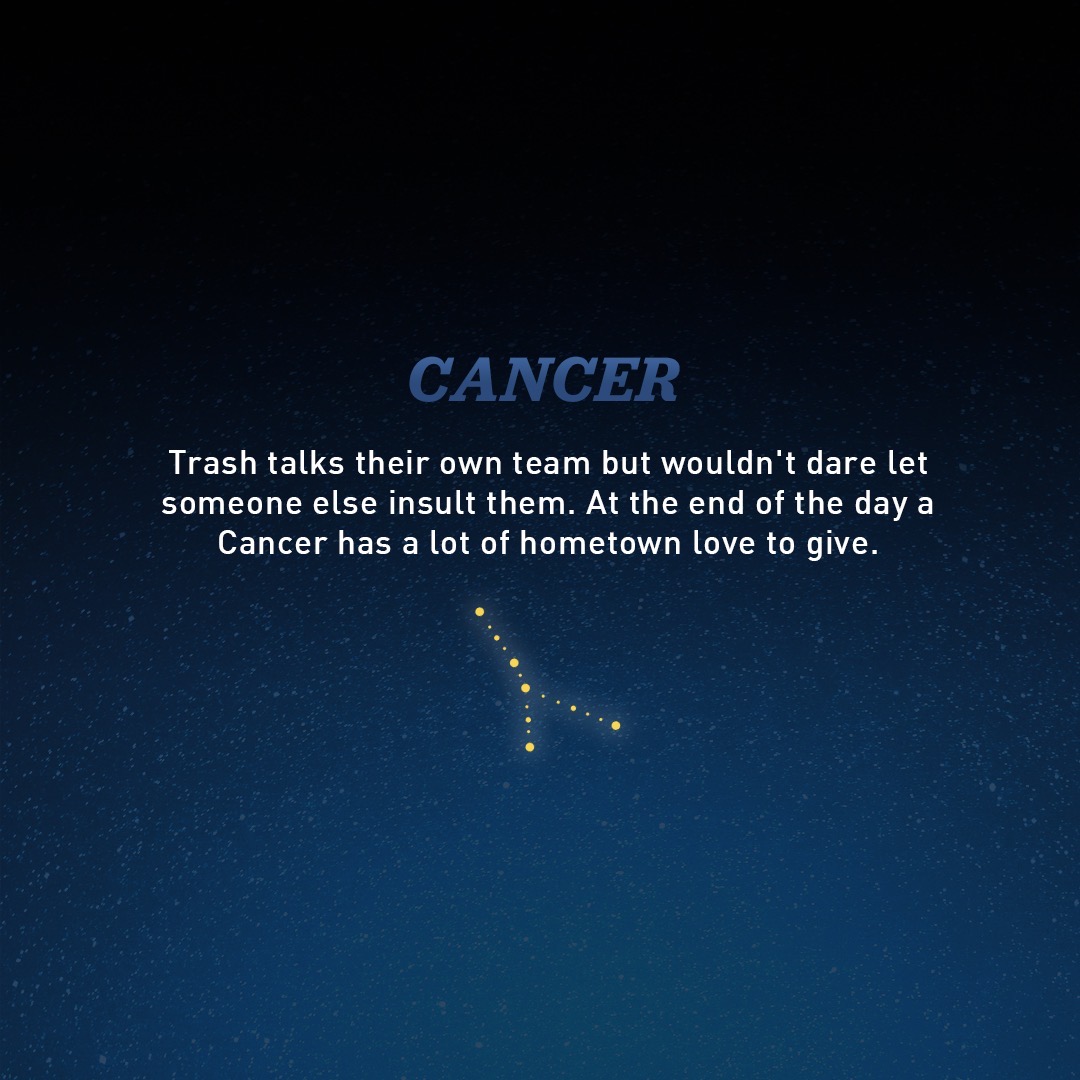 Cancer’s know their favorite team may have some weaknesses, in fact, they’ll tell you about all of them. But don’t mistake that as an opening to air your opinion, because these loyal fans will set you straight quick. 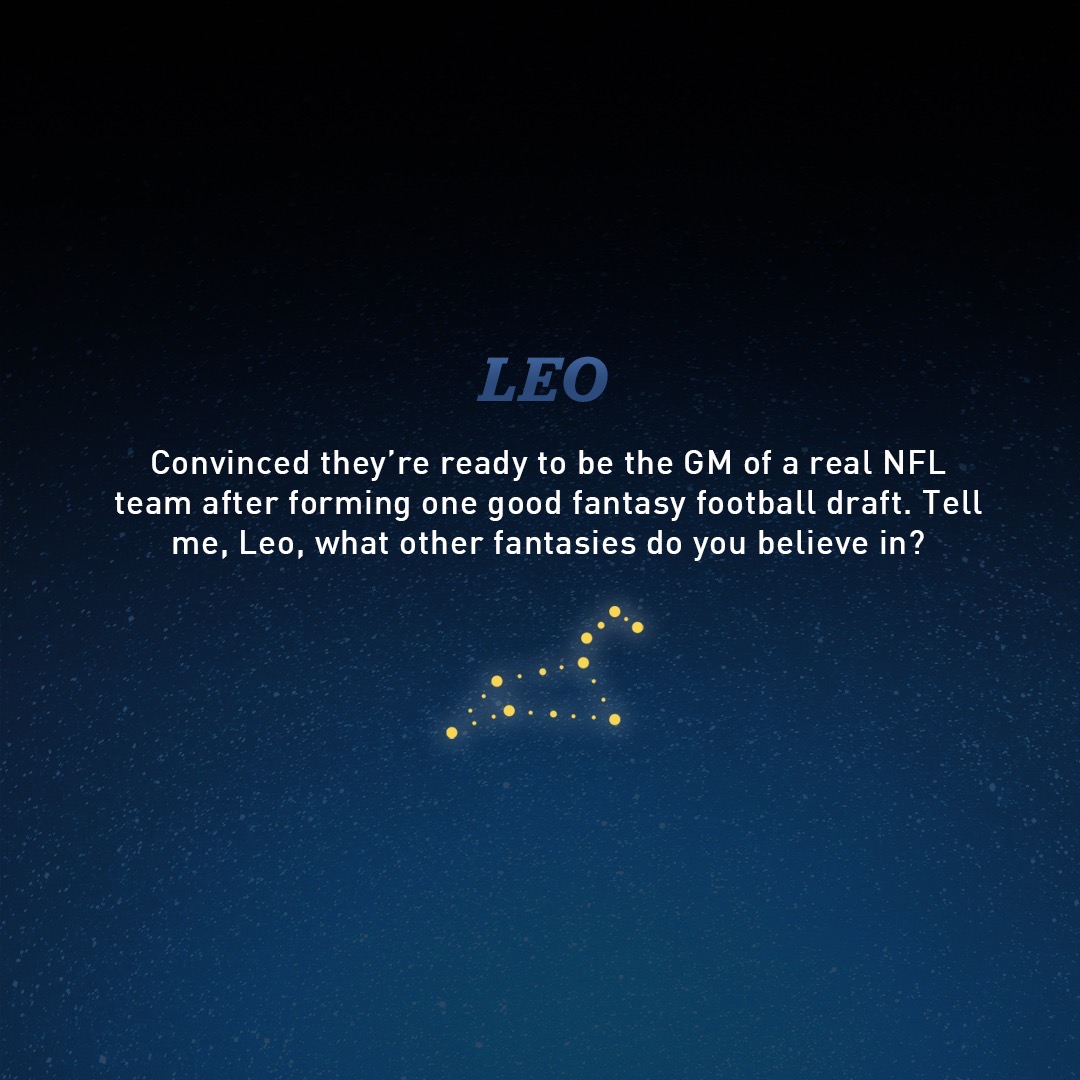 Of course, Leo knows best about any topic, so college football is no different. All it takes is one winning fantasy season to convince a lion that they are ready to manage the next championship team.

Keep your watch list strong with these recommendations based on zodiac signs. 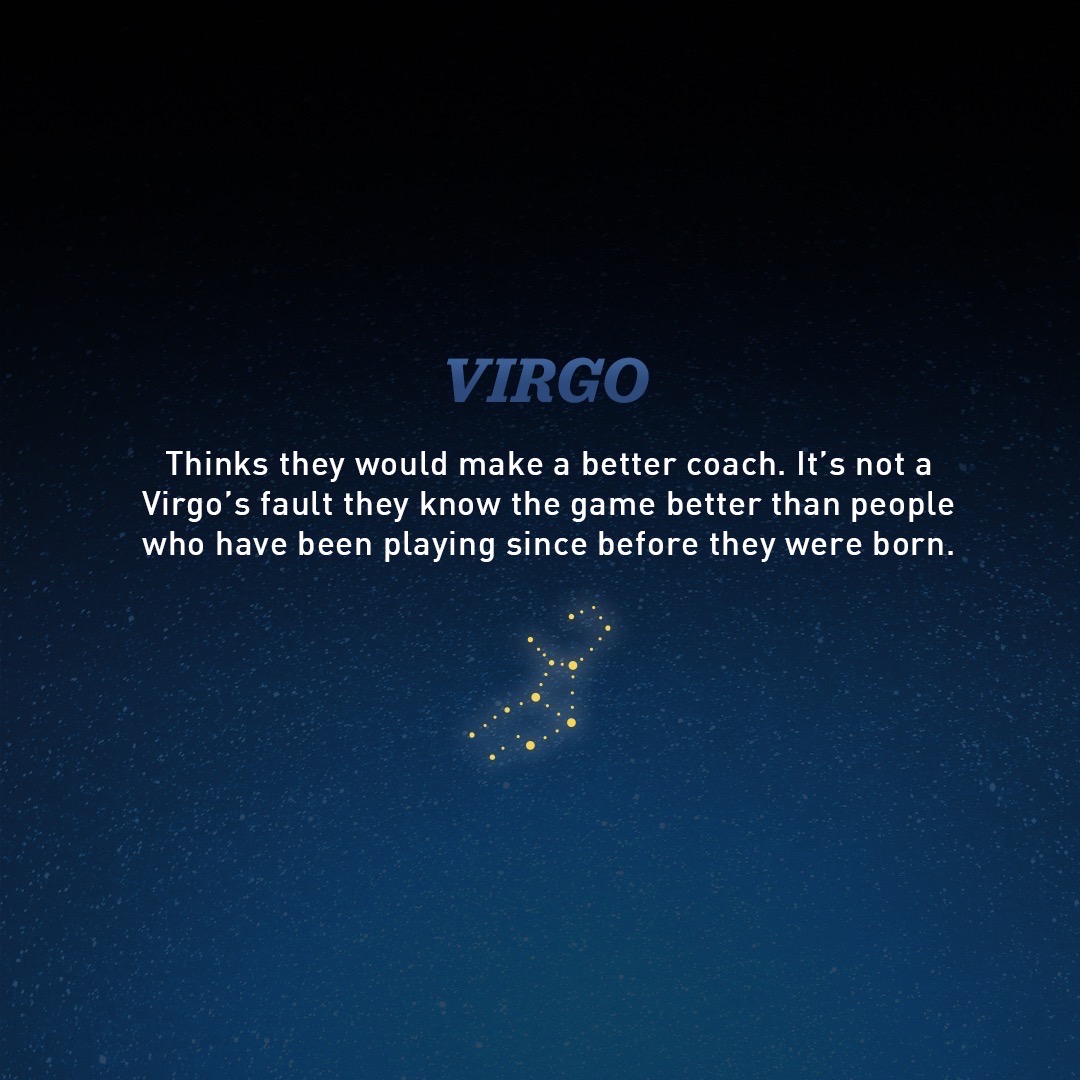 They may be an armchair coach, but Virgo’s assessments are usually spot on, at least when you ask them. 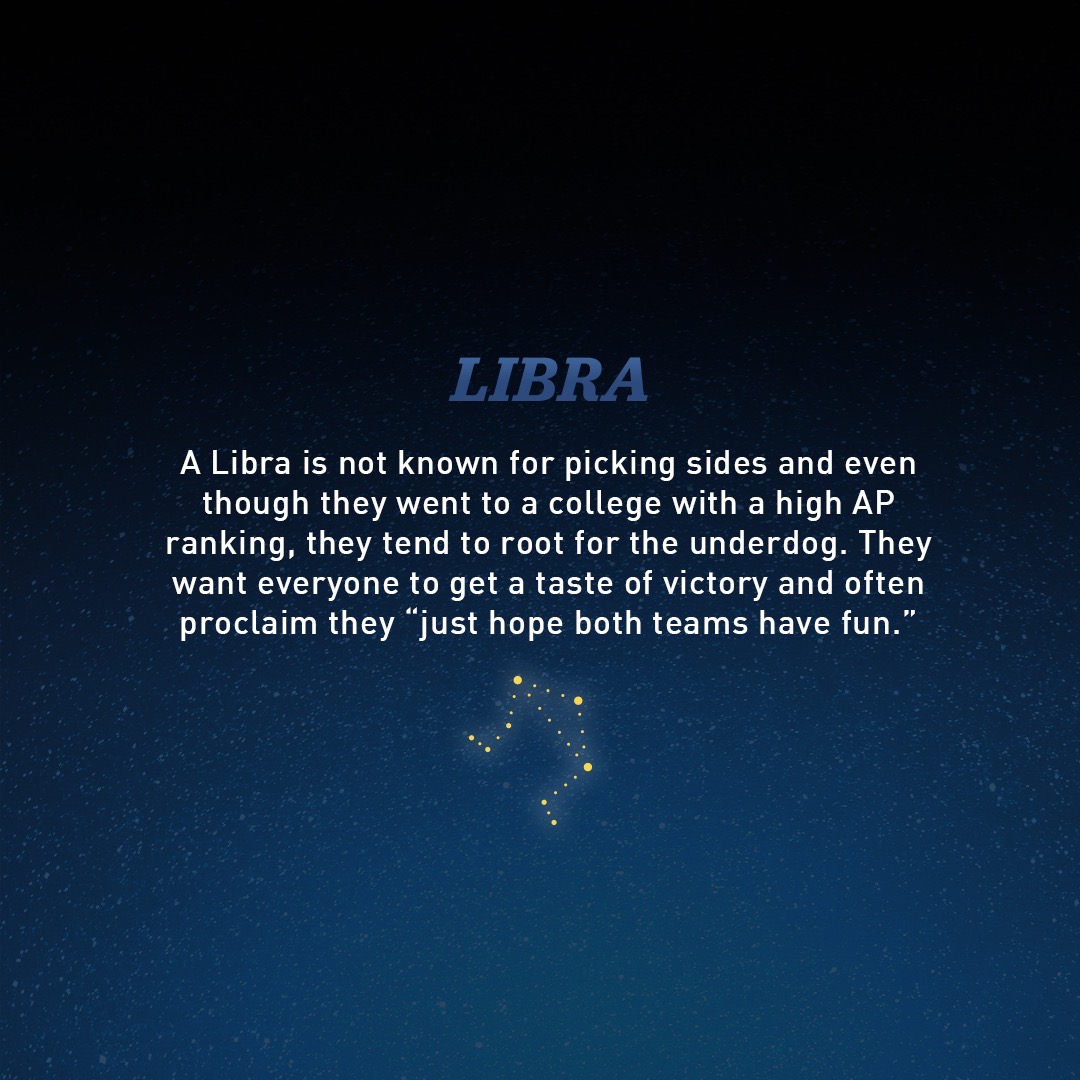 Motto: “I just hope both teams have fun.”

Libra roots for the underdog, not because of logic, but because their hopeful spirit just wants everyone to have that sweet taste of victory. 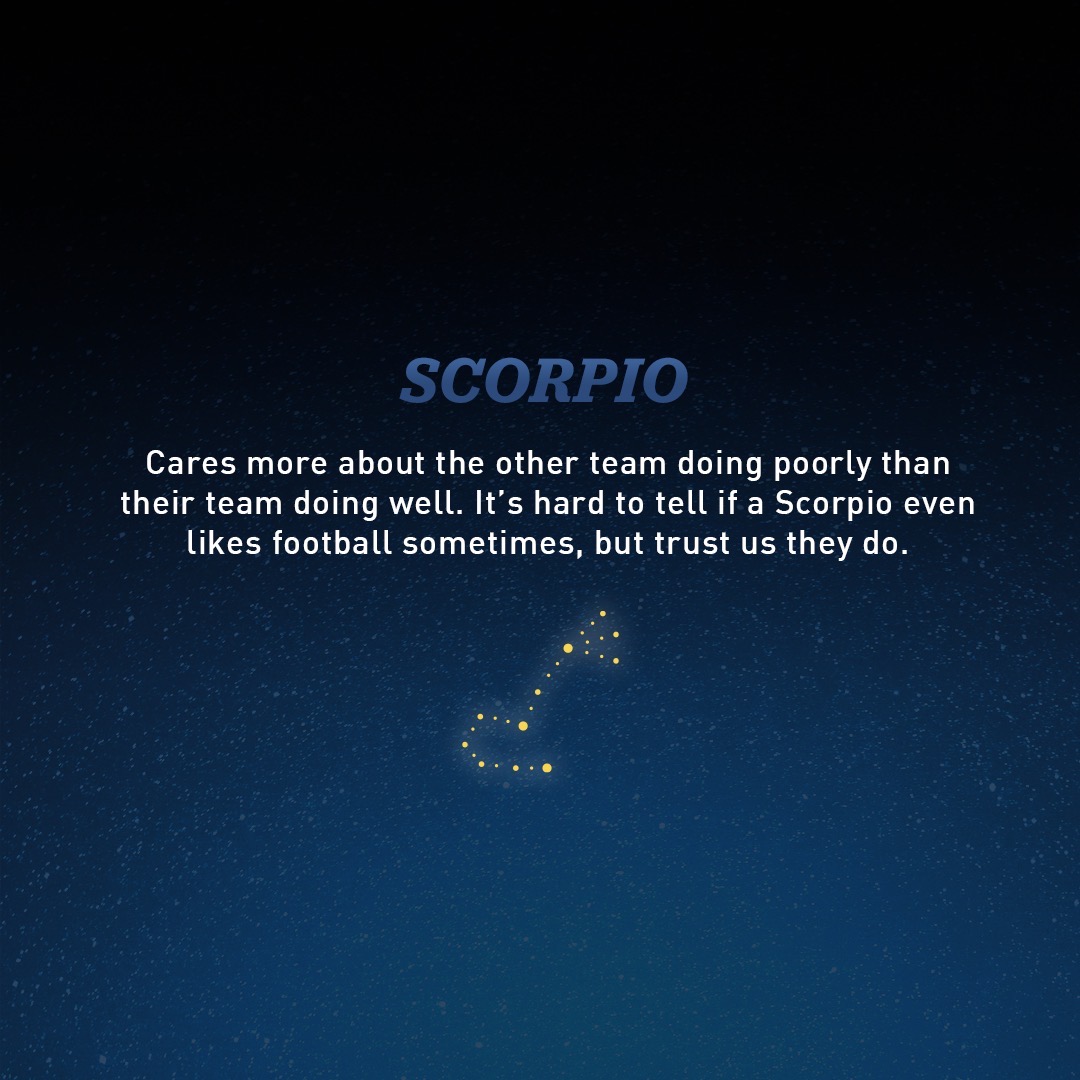 Scorpio may root for the opposing team’s demise more than cheering for their own team’s success, but that kind of negativity can really make a watch party interesting. 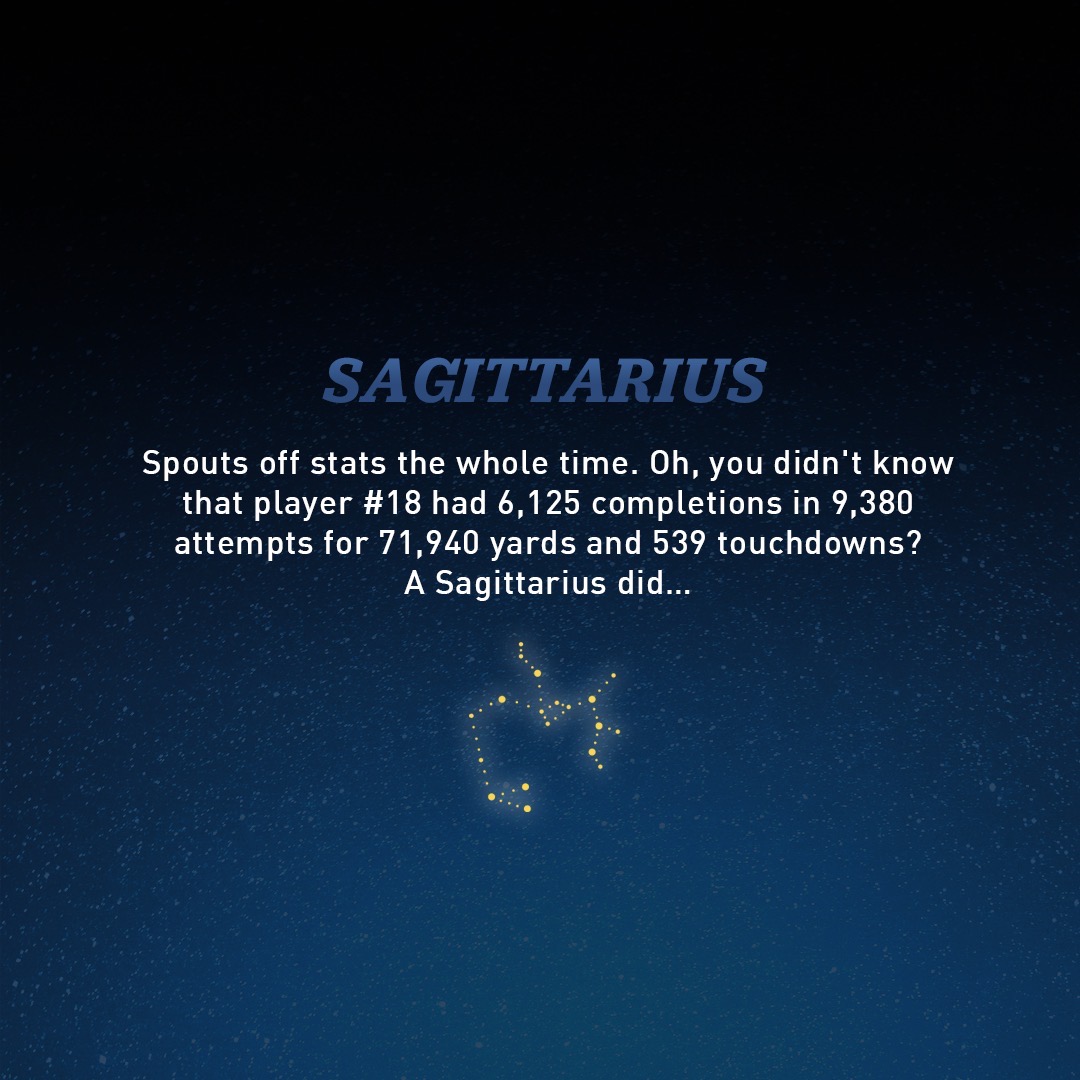 Looking for college football stats? Sagittarius has you covered and will keep you more informed than you’ve ever thought (or hoped) possible. 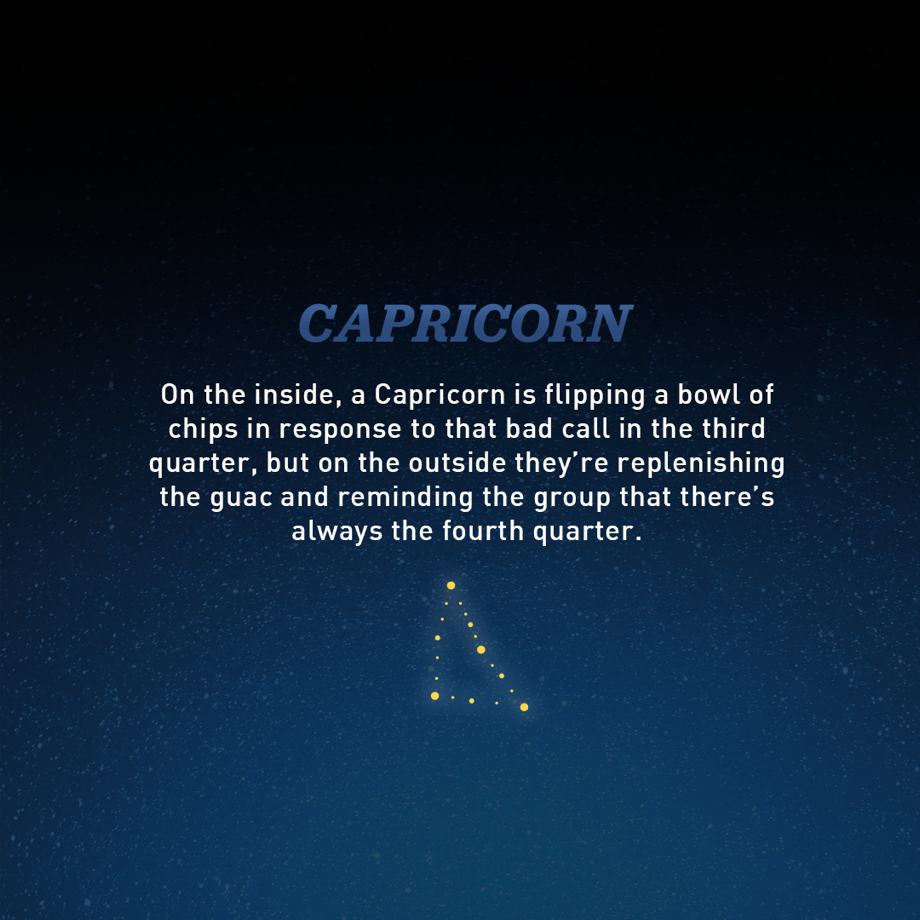 Eternally composed, Capricorn may be losing their cool on the inside, but come across totally chill on the outside. This internal struggle is what keeps their passion alive, so they love a game featuring explosive teams or exciting and unexpected outcomes. 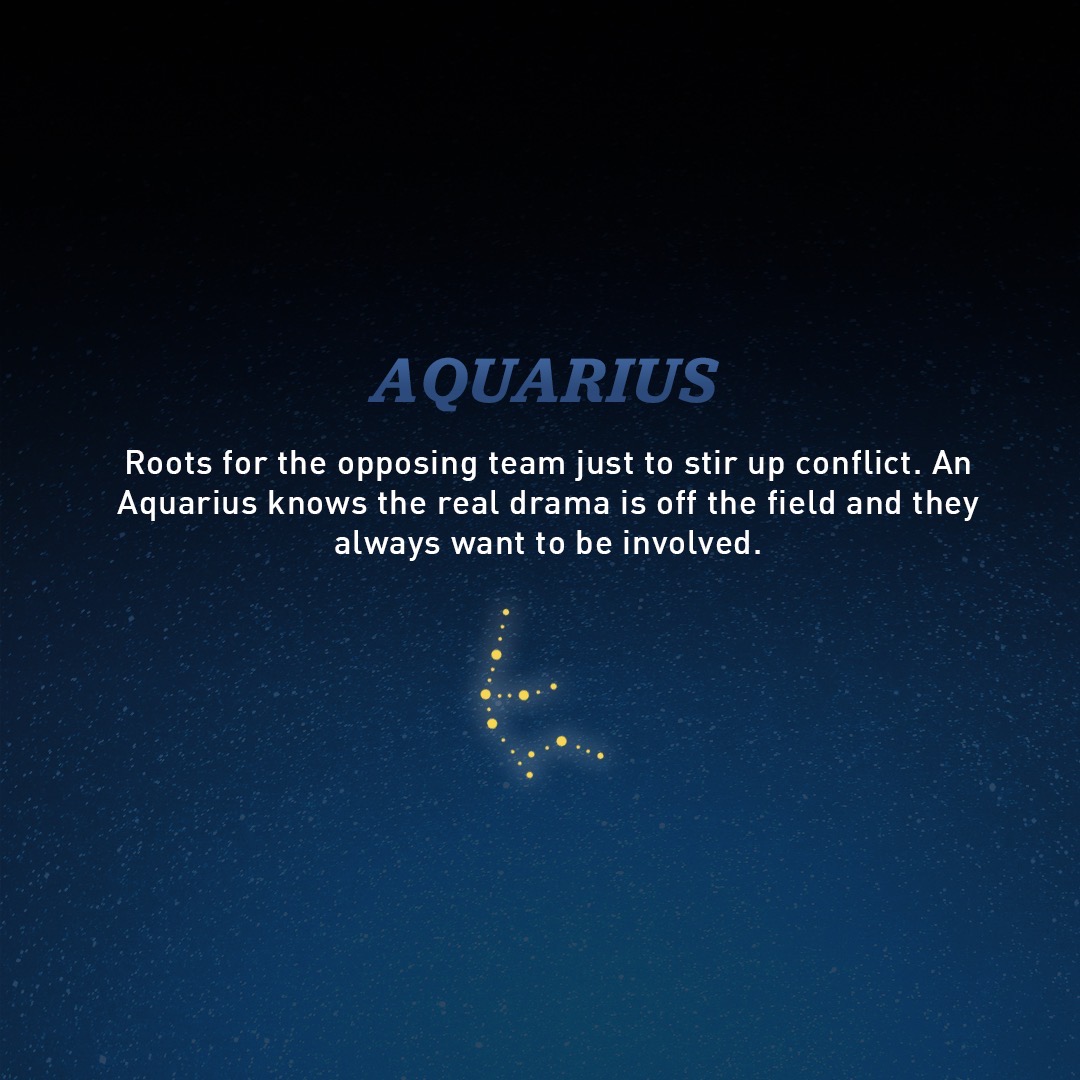 Motto: “Leave it all on the field.”

Just to elevate the drama levels a bit, the sport-loving Aquarius will go against popular opinion and root for the competition. Keeps thing spicy. 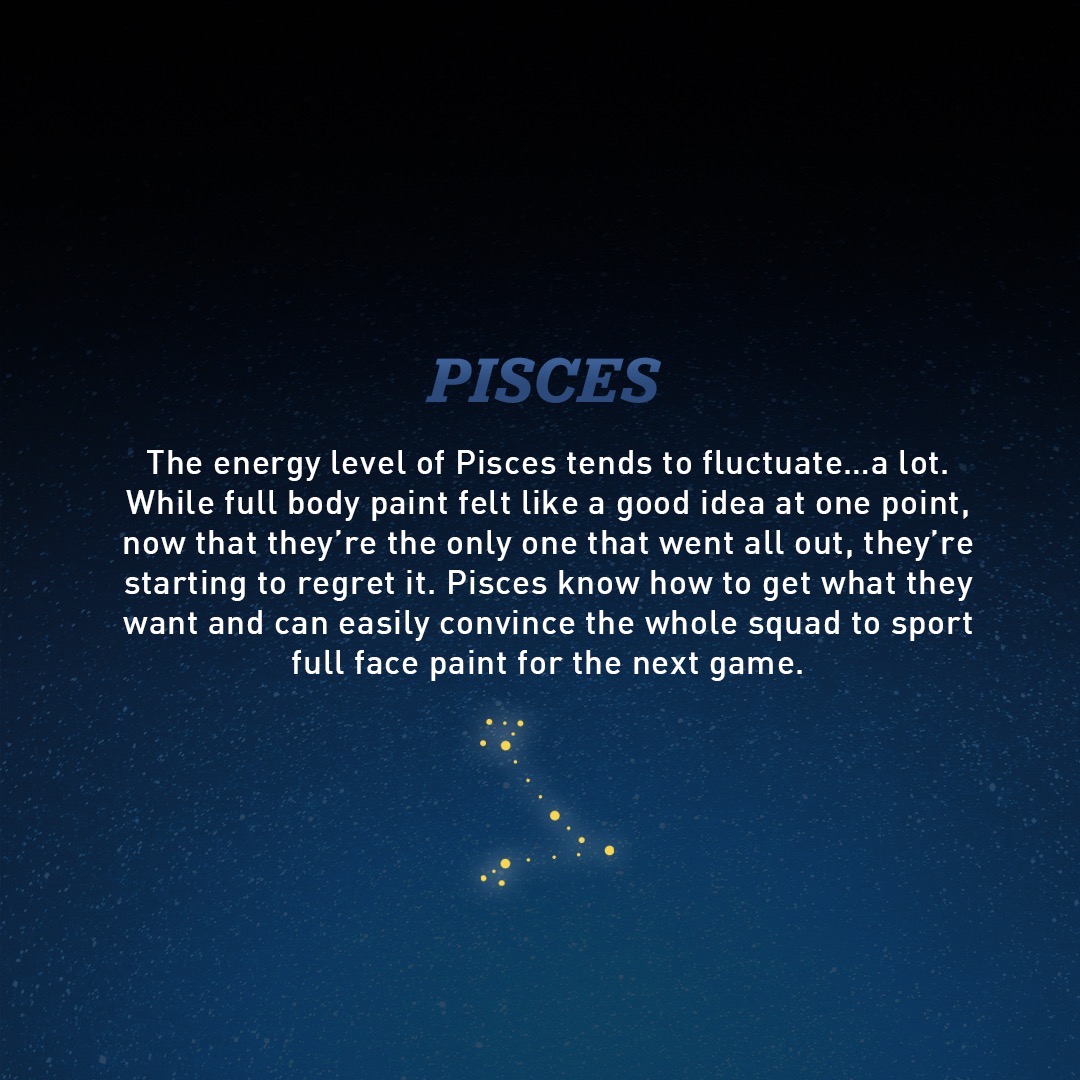 For a Pisces, the body paint may have seemed like a good idea at the time, but now it just feels itchy and suffocating. Luckily, that energy will replenish when it’s time to get ready for the next game.

Get in the Game: Your Guide To College Football Schedules, Feature Matchups And More]