The best part about summer has arrived, it’s Discovery’s Shark Week. More than just a weeklong series of TV shows, Shark Week is an occasion, one we look forward to each year. Don’t be afraid, dip your toes into the water and see what Shark Week 2022 has lurking under the surface starting on July 24, 2022 on Discovery at 8 p.m.

What is Shark Week?

This weeklong extravaganza celebrates our beloved ocean predators through original shows providing equal parts education and entertainment. For its 34th edition, Shark Week will make a splash with new programming and surprises, including featuring the event’s first ever master of ceremonies, Dwayne “The Rock” Johnson.

When is Shark Week?

If you find yourself asking “what channel is Shark Week on?” then look no further. Shark Week is on Discovery which can be found on DIRECTV channel 278. Tune in to see your favorite sharks from great whites to hammerheads in high definition.

Celebrate Shark Week and learn about some of the coolest (and weirdest) sharks under the sea.

Explore the full Shark Week schedule which kicks off each evening from July 24 through July 30. 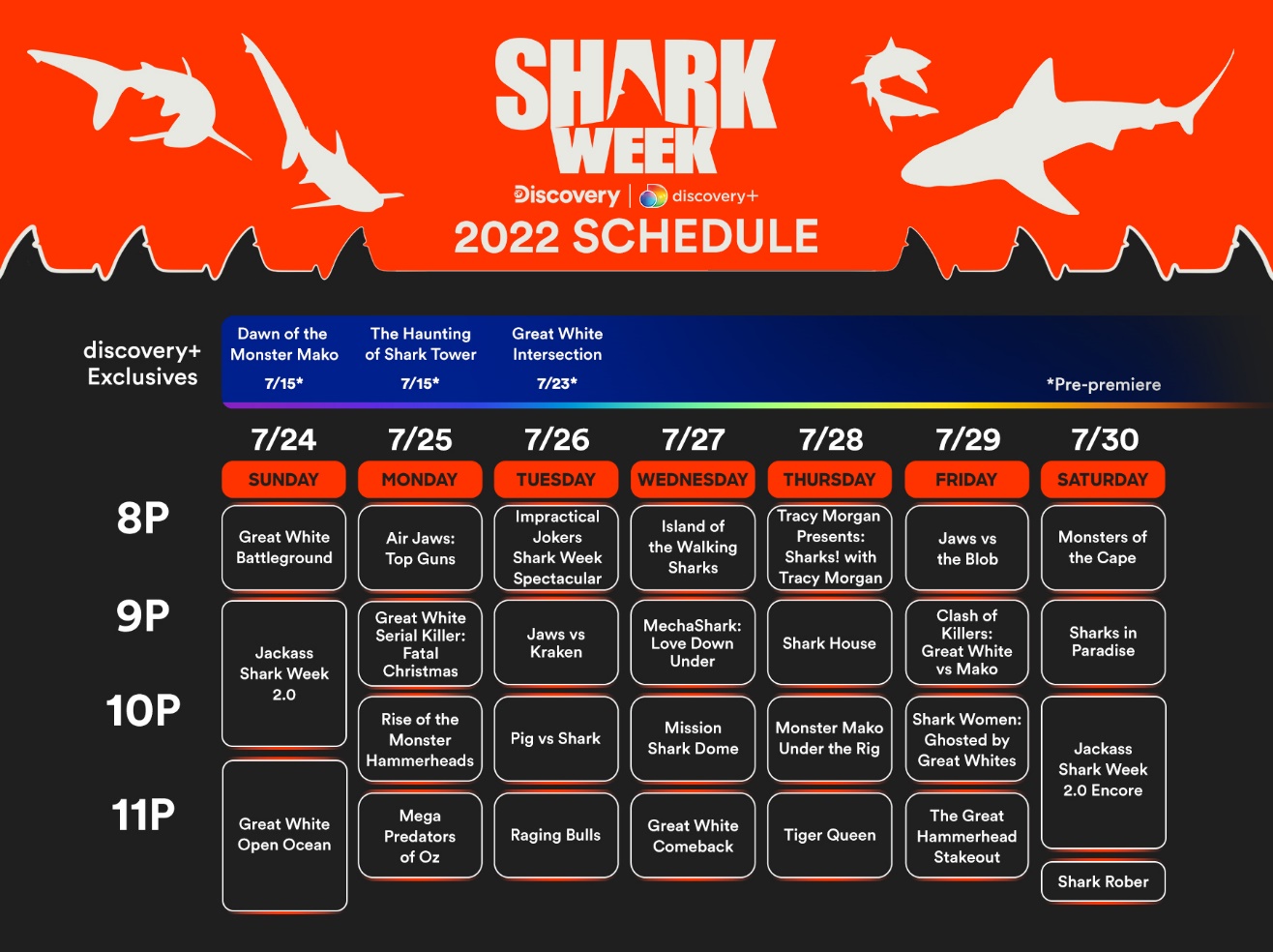 Johnny Knoxville, Chris Pontius, Wee Man, Jasper, Dark Shark, Zach Holmes and Poopies are back to finish what they started. After Knoxville sent the guys on a terrifying Shark Week mission last year, Knoxville is joining the boys as they head out to get their friend Poopies over his fear of sharks.

In 2020, shark diving expert Jimi Partington nearly dies in the jaws of a great white. A year later, he looks to overcome his PTSD and get back in the water with the ocean’s biggest mega-sharks. But what starts off as a positive experience, quickly becomes a battle for life and death.

Dickie Chivell and Andy Casagrande use the latest high-tech cameras in hopes of capturing the largest breaching great white ever seen.

10 p.m. – Rise of the Monster Hammerheads

Reports of two legendary, very large great hammerheads — Big Moe in the Florida Keys and Sunken in Andros, Bahamas — have Dr. Tristan Guttridge and Andy Casagrande wondering if there is a clan of monster hammerheads who share the same DNA.

In South Australia, a fisherman finds a half-eaten mako, and shark experts say only one species is responsible; using underwater ultrasound imagery, tissue sampling, and DNA, they attempt to prove that the great white is the ultimate predator.

The jokers set out to dispel the myth that sharks are man-eating beasts the only way they know how — with extreme, mortifying challenges and dares.

Something shocking is happening in the abyss around Guadalupe Island. Photos of great whites with strange scars believed to be from giant squids have surfaced. Dr. Tristan Guttridge leads a mission to get a glimpse into the battles between the two beasts.

The famous swimming pigs of the Bahamas may be in peril. Some believe that the local tiger shark population have acquired a taste for pork and may be feasting on these famous oink-sters.

Bull sharks are one of Australia’s “Big 3” deadly shark species; there’s been a shift in their behavior concerning the human population; Paul De Gelder joins Johan Gustafson to uncover why these sharks are becoming more aggressive hunters.

8 p.m. – Island of the Walking Sharks

Animal Planet’s International wildlife conservationist and biologist Forrest Galante travels to the mysterious island of Papua New Guinea to definitively prove that sharks are evolving to walk on land.

Shark expert Kina Scollay and his elite team return with a unique one-man-submersible, the Mechashark, to a top-secret location off New Zealand attempting to do something that’s never been done: locate a Great White shark mating ground.

A team of shark experts re-imagine ancient diving bell technology to create a research platform they call Shark Dome. Dr. Austin Gallagher and Andre Musgrove enter the Shark Dome to allow them to free dive at depth and get closer to great white sharks than ever before.

In 2017, one of the strangest ocean mysteries occurred in South Africa where an entire Great White population disappeared overnight; Alison Towner and her team head out on an epic investigation to find the missing Great Whites of Seal Island.

Tracy Morgan teams up with shark experts throughout the country to identify the craziest and most ferocious sharks in the ocean. From rare species to stealth predators, Tracy shows off his favorite sharks and their incredible capabilities and adaptations.

When never-before-seen footage surfaces of a pack of orcas killing a great white, Dickie Chivell springs into action, building an underwater habitat called ‘Shark House.’  His mission is to live on the sea floor for seven days, looking for the last remaining great white sharks in South African waters.

A team of researchers have discovered a mysterious group of mako sharks of the Gulf of Mexico who migrate around Florida and up to Rhode Island. They call these makos ‘mavericks.’ Now, the teams are trying to discover what sets them apart from other makos.

The shark population in Turks and Caicos has a sizable concentration of female tiger sharks, leaving scientists wondering where all the males are hiding. Shark enthusiast Kinga Philipps joins Dr. Austin Gallagher to help solve this puzzling mystery.

A new ocean phenomenon known as The Blob sends juvenile great white sharks straight into a feeding frenzy for monster 20ft adults off the coast of Guadalupe Island. A team of shark experts dives deep to discover if the young sharks survive or become a snack.

Scientist Dr. Riley Elliott is tracking two of the ocean’s most legendary apex predators – great whites and makos – as they head on a collision course during their yearly migration off the coast of New Zealand.

Alison Towner has risked her life many times, tagging and studying great white migration patterns in South Africa for the past decade. Now she’s assembling the next generation of shark explorers for a spectacular adventure.  Together, her all-female crew will pull all the stops — cage dive, free dive, drones, decoys, breeches and more — to track her missing white sharks.

Dr. Tristan Guttridge and James Glancy travel to Andros Island to investigate reports of an exclusive population of giant hammerheads. To get answers, they attempt one of the longest shark dives EVER – upwards of 10 hours – using an underwater habitat.

Shark Week veterans Dr. Craig O’Connell and Mark Rackley dive into the great white infested waters off of Cape Cod looking to test cutting-edge shark deterrents to help keep the waters of the Cape safe for both beach-goers and sharks, before it’s too late.

Shark conservationist Kinga Philipps and scientist Tristan Guttridge embark on an expedition through the remote Islands of Tahiti to investigate whether local legends and mysteries about massive sharks are true.

Mark Rober teams up with marine biologist Luke Tipple to test the theory that sharks can smell human blood from a mile away.

Take your Shark Week fun to the next level with this downloadable shark content that is made for shark lovers of all ages.

Keep your shark education swimming with these Shark Week stories.

Friend Not Foe: Saving Sharks Before It’s Too Late

Get Yourself Some Shark Week NFTs