Westworld Season 2, Episode 2 Recap: “Have you ever seen anything so full of splendor?”

HBO managed to keep Jimmi Simpson‘s involvement in season two secret for quite some time, and even when the news was out there, nobody seemed to think he’d be overly involved. So the amount of young William in episode two is an awesome surprise, particularly since it gives us some keen insight into what happened to him after the events of season one but before he really became the Man in Black (Ed Harris).

Let’s dig right in, shall we?

Interspersed with the episode showing us more of the two weeks between the incident and “present day,” aka when Bernard (Jeffrey Wright) awoke on the beach, there is a series of flashbacks where we see more of how Logan (Ben Barnes) and William got involved in Westworld. We also meet Logan’s father, James Delos (Peter Mullan).

In the first flashback, Arnold (Wright) and Ford (Anthony Hopkins, though he doesn’t actually appear) prepare their “best work” for a potential investor, who we soon find out is Logan. Before the big meeting, Arnold takes Dolores (Evan Rachel Wood) to his home and talks about how much she and his son, Charlie, have in common. The house is under construction and in a big city, but the show doesn’t explicitly tell us where.

This flashback takes place before Logan and William’s trip to the park — William and Logan’s sister are only dating, not engaged, and William bows out of the glad-handing that Logan loves so much. So Logan goes through the “demonstration” on his own, which is to say he is put in a room populated entirely by hosts and is gobsmacked to learn they’re all robots. He had no idea technology had come this far and he immediately knows the Delos company should invest in this venture. 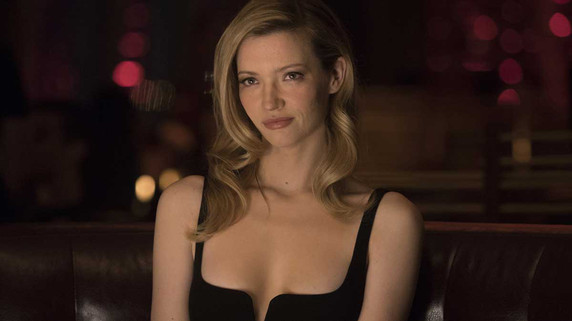 Then a jump forward in time: William and James, along with other company members, land in Sweetwater. William is trying to convince James to invest more money in Westworld, telling him that there’s so much more to this than “underwriting some investment banker’s voyage of self-discovery.”

After William’s adventure with Dolores in season one, he clearly understands that the park brings out people’s true natures.

“Nobody’s watching, nobody’s judging — at least, that’s what we tell them,” William says to James. “This is the only place in the world where you get to see people for what they really are. And if you don’t see the business in that, then you’re not the businessman I thought you were.”

If you’ll recall from episode one, Bernard discovered they’re logging guests’ experiences and DNA. That seems to be part of what William is talking about right here. On the surface, it looks like some kind of blackmail scheme, though knowing Westworld, there’s a lot more to it than that — especially after this episode’s third William flashback and what he later says as the older Man in Black.

In the third flashback, it’s James’ retirement party and we get to see Juliet and also William’s daughter, Emily. Dolores is there playing the piano, and there’s the tiniest spark of recognition in Dolores’ eyes when she sees William, like she knows him but doesn’t quite know why or from where. And there’s a pang of longing in William’s eyes too. It’s really a really beautiful moment and excellent work from Simpson and Wood that makes me wish there could be more William-Dolores scenes this season, but I fear that is not going to happen.

Anyway, the point of this flashback is to convey that James is dying; he alludes to it when William tells him that “things are progressing” but they all “need a little patience.” James responds by saying that some of them can afford to have more patience than others.

I can’t quite put my finger on what is going on here, but it sounds like something related to Westworld is possibly going to extend James’ life. Are they making medical advances using the guests’ DNA?

It definitely seems related to what Bernard discovered in the facility with Charlotte (Tessa Thompson) because Logan later tells Dolores the whole species is starting to burn and “these guys” lit the match. Logan is obviously spiraling into hard drugs, probably because his brother-in-law is daddy’s favorite and he’s just the no-ambition playboy. But what he says about the species is interesting.

The final flashback actually seems to jump back in time to after William visited the park with James but before James’ retirement party. William calls Dolores “a thing” and also a “reflection,” saying he can’t believe he fell in love with her. But really he fell in love with his true self, not her, and that “everybody wants a little bit of what I found here.”

“I think there’s an answer here to a question no one’s even dreamed of asking,” he says, then takes her to see some mining equipment hard at work in the middle of the desert. At this point, William echoes Dolores’ earlier line of, “Have you ever seen anything so full of splendor?” — and that feels like the final dagger in the hearts of William-Dolores shippers everywhere. It’s why I highly doubt we’re going to see them interact again this season.

But this episode was chock full of Simpson, and that was a nice surprise, plus we have quite the mystery to solve about just what he and James Delos were up to in the earlier days of the park.

We find out at episode’s end that Dolores thinks “Glory” and the “Valley Beyond” are the same thing and they’re not a place, they’re a weapon. This “weapon” is something an “old friend” was foolish enough to show her long ago, referring to this scene where William took her to see the mining equipment. To get there, she’s going to need an army — and also a lieutenant who is up to speed on what’s going on.

So Dolores and Angela (Talulah Riley) take Teddy to a bunker full of field techs (who rather hilariously have no idea what is going on topside) and get them to show Teddy his entire history — all the violence, all the deaths. He takes it in and seems to think Dolores is doing the right thing, though we’ll see how long that lasts. Teddy is a kind soul at heart and may not always want to follow Dolores’ rampage of death. But for now, he’s all in. 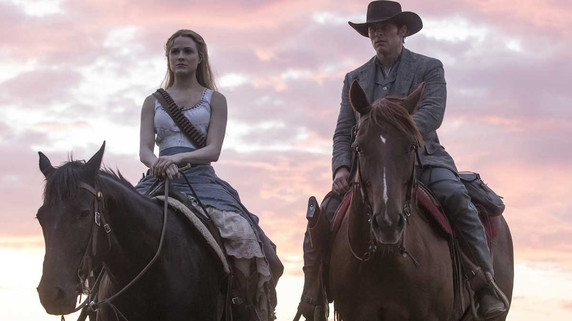 They need allies, though, so they find a group of Confederados led by Major Craddock (Jonathan Tucker). Dolores makes nice for about two minutes, seeing if they’ll follow her without violence, but they’re Western outlaws who don’t take orders from women… so Dolores, Teddy, and Angela gun them all down and then bring them back to life to prove they’re the ones to follow to Glory.

“We’ve toiled in God’s service long enough. So I killed him,” says Dolores. “If you want to get to Glory, you won’t need God’s favor. You’ll need mine.”

It’s pretty badass. And now Dolores has her army.

Note: Along the way to finding the Confederados, Dolores and co. cross paths with Maeve (Thandie Newton) and her two sidekicks. The scene is almost infuriatingly short — it’s a damn shame that Newton and Wood have had so little screen time together; I really hope they end this season fighting side by side. But the gist of this scene is that Maeve doesn’t want to cut a swath through the humans. She says there are other ways to fight and Dolores should respect that and let them go on their way. Dolores acquiesces, but let’s hope they find each other again. 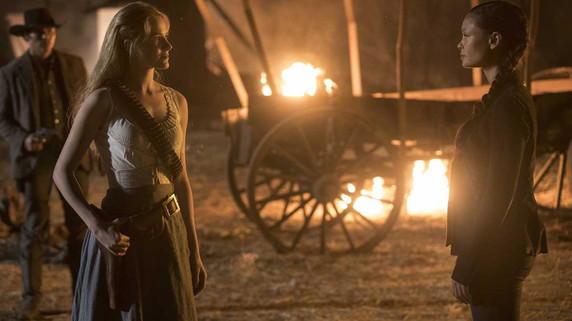 In a wonderful callback to season one, the Man in Black decides he needs a sidekick so he saves Lawrence (Clifton Collins Jr.) from the menacing Pardue brothers, who have tied him up over an ant hill. He says Lawrence needs to help him fight and they will see what kind of men they could have been all their lives.

He also tells Lawrence that this park is a place hidden from God where people could sin in peace, and then he gives us more clues about what the park was secretly up to all these years.

“We were watching them. We were tallying up all their sins, all their choices. ‘Course, judgment wasn’t the point. We had something else in mind entirely,” he says. Again, if it wasn’t judgment (i.e. blackmail), what was it? 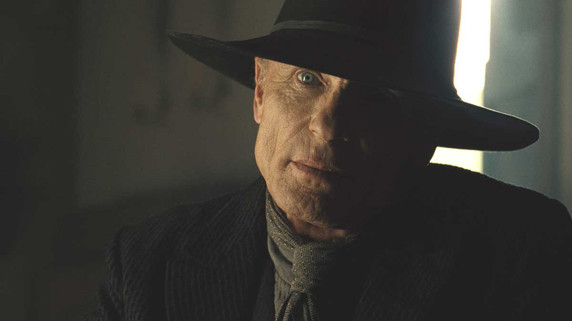 Anyway, the Man in Black is going to fight his way out of the park and “appeal the verdict” on his judgment, then burn the park to the ground. Just who he is going to appeal to is not specified, though it’s probably his daughter. There’s no one else left in his life.

To get there, he and Lawrence have to travel through Pariah, although the city of debauchery looks a bit different now. They run into EL Lazo, which is the character Lawrence used to play. El Lazo is now played by another host who happens to be a wonderfully secret cameo by Breaking Bad’s Gus Fring himself, Giancarlo Esposito. El Lazo says that the Man in Black is supposed to go on this journey alone. Then El Lazo has all his men kill themselves and turns the Man in Black’s gun on himself.

The Man in Black’s response? “F*ck you, Robert.” He knows where he needs to go. He built it, and he calls it his “greatest mistake.” Obviously, the Man in Black and Lawrence are headed to whatever it was William showed Dolores all those years ago. I can’t wait to find out more.

In case you missed it, here’s the recap for the season premiere, Journey Into Night!