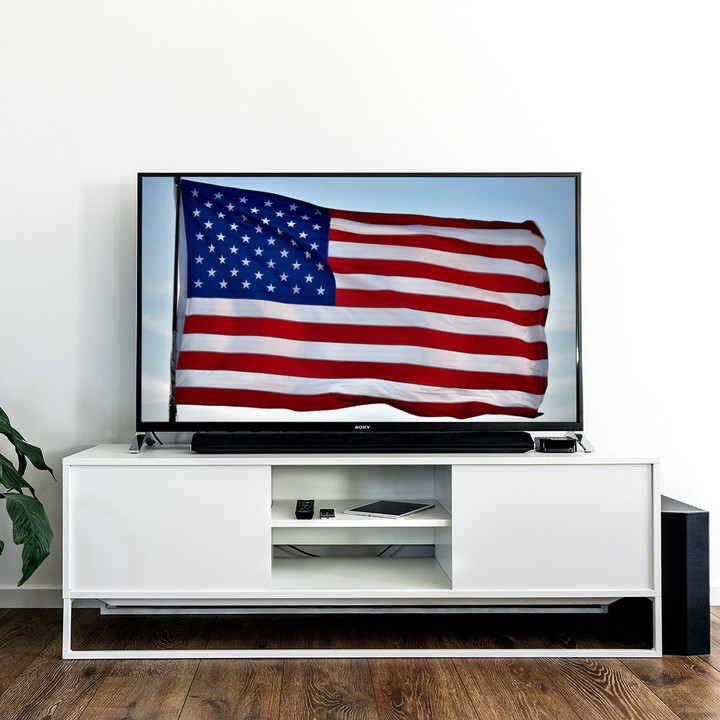 Gear up for the Fourth of July this summer with a selection of series that explore our varied history, geography and what it means to be American. With looks at life in the 1800s and throughout the 20th and 21st centuries, checking out these shows will give any viewer a taste of U.S. cultures, mentalities and turning points in time.

Based on the town of Deadwood, S. D., this series takes a look at how life was lived in the true Wild West. Set in the 1870s and inspired by real-life residents of the time, like Seth Bullock (Timothy Olyphant) and Al Swearengen (Ian McShane), the show explores the gold rush and the area’s growth from camp to town. Creator David Milch used newspaper archives and personal diaries to conjure an authentic look and feel rooted in actual characters and events, which landed the series on “greatest TV shows of all time” lists.

Over a decade after the last episode aired, Deadwood: The Movie was made, set 10 years after the end of the third season as the community celebrates South Dakota’s ultimate statehood in 1889. Molly Parker and John Hawkes co-star amongst a stellar ensemble cast.

Catch up on Deadwood now.

In another lawless gang, this time on the East Coast, Boardwalk Empire follows the Prohibition Era as experienced in 1920s Atlantic City, where city treasurer Enoch “Nucky” Thompson (Steve Buscemi) walks the line between politics and crime. With a brother who is also the sheriff (Shea Whigham) and dealings with the most notorious gangsters of his time, including Al Capone and Lucky Luciano, Nucky seems untouchable. But when a former protégé (Michael Pitt) tips off the Feds, Nucky’s winning streak may just be coming to an end.

The pilot episode, which cost $18 million to produce, was directed by Martin Scorcese — leading to a run that would last five successful seasons. Kelly Macdonald, Paz de la Huerta, Michael Shannon, and Michael Stuhlbarg round out an all-star cast.

Borrowing its name from a New Orleans neighborhood, Treme begins just three months after Hurricane Katrina hit the city. Viewers get an inside look at the aftermath as its artists, musicians, chefs and other residents attempt to rebuild their homes and lives and the unique energy of N’awlins.

Spanning four seasons and created by the same folks who made The Wire, the show was similarly praised for its authentic representation of this one-of-a-kind American city and the people that make it so special. Wendell Pierce, John Goodman, Steve Zahn, Melissa Leo, Khandi Alexander and other familiar faces from television and Hollywood bring it all to life.

This seven-season satire stars Julia Louis-Dreyfus as a fictional Vice President of the United States who is set on climbing the political power ladder, whatever it may take. With her team in tow — including Anna Chlumsky as chief of staff, Tony Hale as her personal aide, Sufe Bradshaw as her secretary, and Matt Walsh as director of communications — the gang runs around Washington D.C. (and sometimes beyond) attempting strategic plays and poses that will ultimately land her in the Oval Office. With six consecutive Emmy wins, Louis-Dreyfus nailed the role thanks to her unparalleled comedic timing and the show’s fantastic writing.

The Washington Post called the show “instantly engaging and outrageously fun” while Entertainment Weekly hailed the star’s performance as “a joy to watch, especially when she shows off that famous gift for physical comedy.”

Upon its release in 2018, The AV Club called Wyatt Cenac’s satirical docu-series “pointedly funny, and a necessary addition to late-night.” Over the course of two seasons, Cenac — who executive producer John Oliver describes as “one of the smartest, funniest, most curious people I know” —  explores a variety of issues facing our nation, as well as how to bring about actual change. From robotics to the current state of space travel, police brutality to gun control, mental health to women’s rights and everything in between, the host’s refreshingly casual approach opens the door to meaningful discourse; and that’s the first step toward transformation.

Get HBO Max™ and more included for your first 3 months with DIRECTV CHOICE™ or ULTIMATE Packages.