Superheroes from all over flew into New York City today for the first day of New York Comic Con 2017. As luck would have it, NYC gave all the attendees a beautiful day before they headed into the Javits Center, and there was a lot to see inside. Here are some highlights from day 1 at the con:

1. You could immerse yourself in virtual reality as a member of the Justice League:

Going all in with the #JusticeLeague at #NYCC. Cool shirts to snag at the VR installation. Doors open in one hour pic.twitter.com/SfiBcPr5hB

2. You could see a SUPER COOL Wonder Woman car…

This @chevrolet is wonderful! #NYCC pic.twitter.com/ph3xdUg4Pj

3. You could accidentally spend an entire paycheck on toys and collectibles. (Who doesn’t need a Jason Momoa-as-Aquaman figurine?) 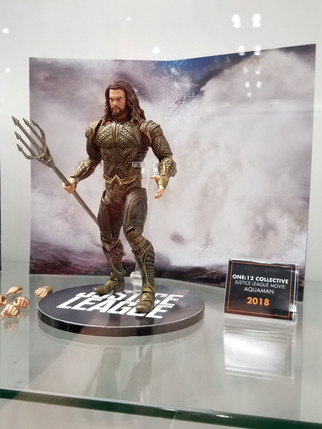 4. And don’t forget about the cosplay. At NYCC, fans really pull out all the stops, and you never know what you’ll see.

5. Panels! DC Comics had a Milestone panel where creative teams for upcoming comic book titles Static Shock, Love Army, and Earth M were announced. Newsarama was at the panel if you’d like to know more.

6. And it wasn’t announced at the convention itself, but huge news broke this afternoon that got fans at the show really excited: Musician Jill Scott has nabbed a roll on The CW’s Black Lightning. She’ll be playing DC villain Lady Eve, and Entertainment Weekly has the full scoop.

Notorious DC villain Lady Eve is about to make trouble for #BlackLightning. Here's who was cast in the #DCTV show! https://t.co/g6JJHMwLFT pic.twitter.com/sEgalWhGQH

More announcements and amazing cosplay are sure to be ahead during NYCC.