The entertainment world lost one of its most prolific and successful TV actresses on Dec. 5, 2022, when Kirstie Alley passed away at the age of 71, following a battle with cancer. In the hours and days following her death, many of Alley’s co-stars from shows like Cheers and movies like Look Who’s Talking took to social media to pay tribute to their fellow actor and friend who also shined in everything from Star Trek II: The Wrath of Khan to Scream Queens and more (think Runaway, For Richer or Poorer and Fat Actress.)

As a way to pay our respects to the late award-winning actress, we have put together a list of the best Kirstie Alley movies and TV shows you can watch streaming that can both serve as a reminder of her talent for longtime fans as well as an introduction to those not as familiar with her body of work. She may be gone, but the dynamic actress will never be forgotten. 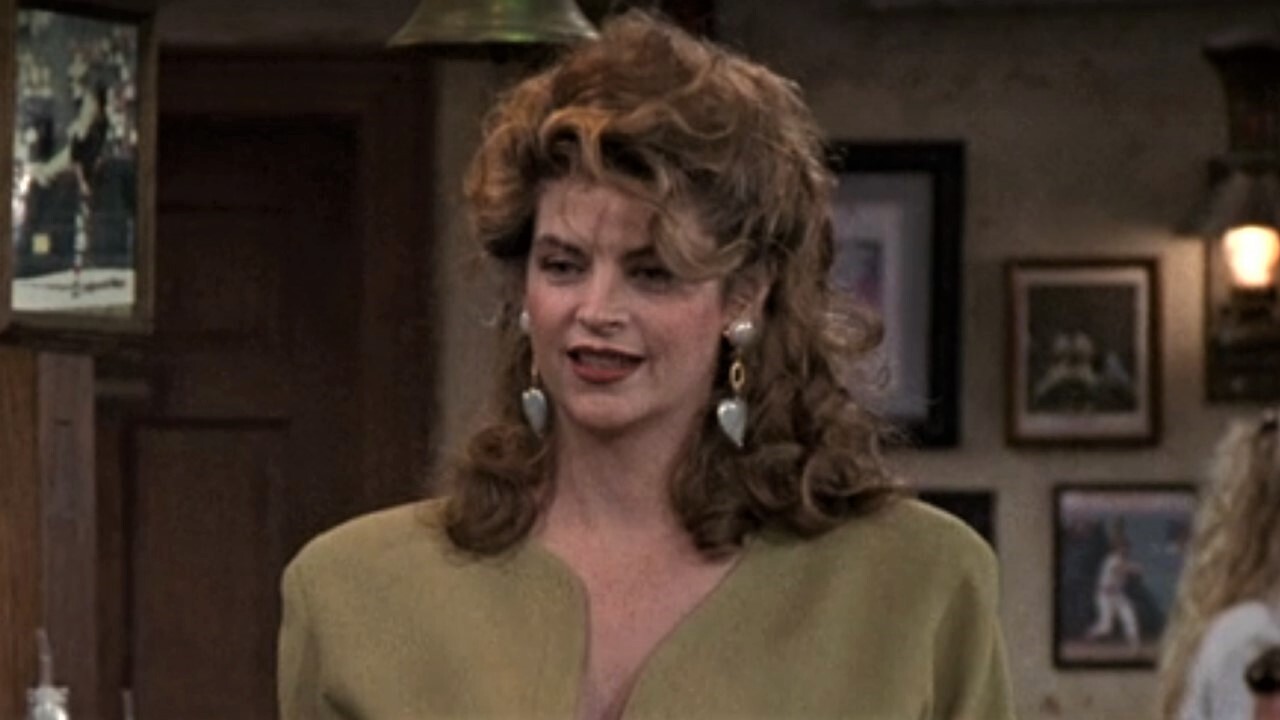 The long-running NBC sitcom, Cheers, was a show that had its fair share of memorable characters throughout its 11-season run, including several that were introduced later that became some of the most iconic faces on the small screen. Woody Harrelson’s barkeep Woody, Kelsey Grammer’s Frasier, and Kirstie Alley’s Rebecca Howe all three fall into that camp.

Introduced during the sixth season of Cheers as the new manager of Sam Malone’s (Ted Danson) titular bar, Alley originally started as a replacement for Shelley Long, but quickly became one of the most dynamic members of the cast, receiving a Golden Globe, an Emmy, and multiple other accolades for her hilarious, raw, and fully realized portrayal of a classic TV character. 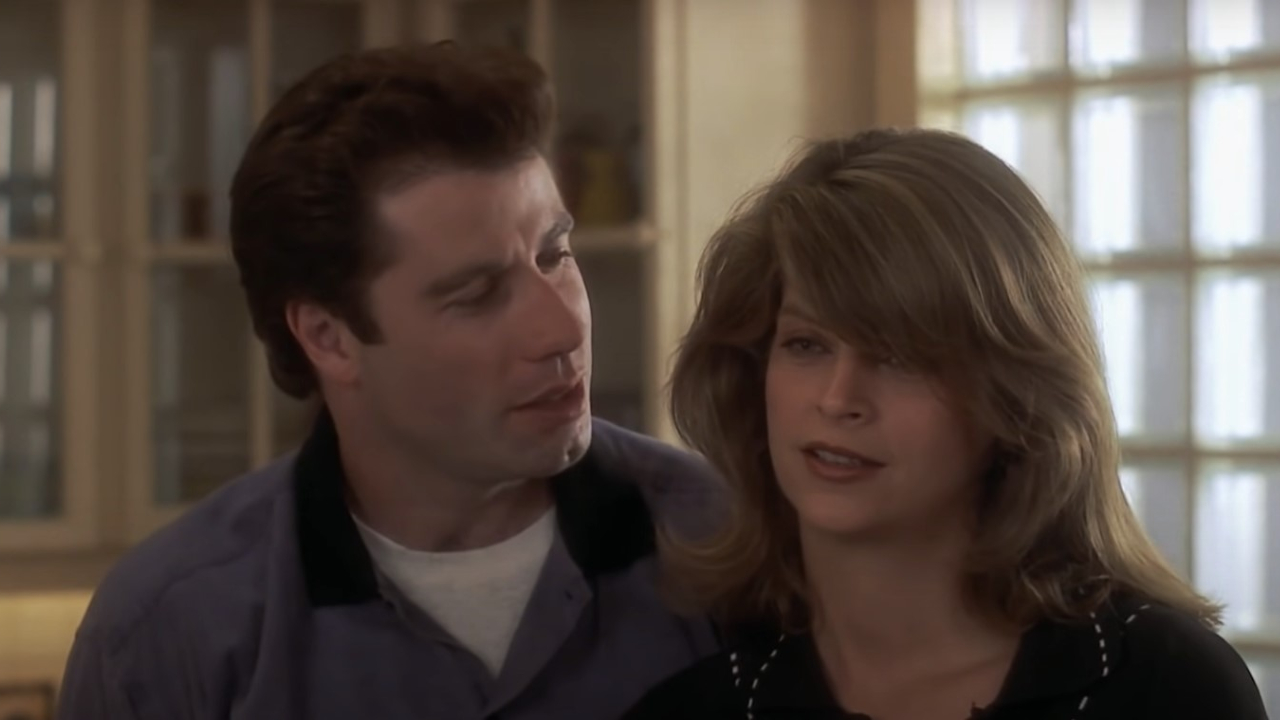 After having the child of her married boss, accountant Mollie Jensen (Kirstie Alley) tries her best to raise her young son Mikey (voiced by Bruce Willis), a process that is both helped and hindered by cabbie James Ubriacco (John Travolta), who has a thing for the single mom.

Look Who’s Talking is remembered mostly for Willis’s iconic performance (which happens to be one of his best), but the 1989 romantic comedy also features some of the best work from Alley and Travolta, who have incredible chemistry throughout the film as well as its sequels   (Look Who’s Talking Too and Look Who’s Talking Now.) 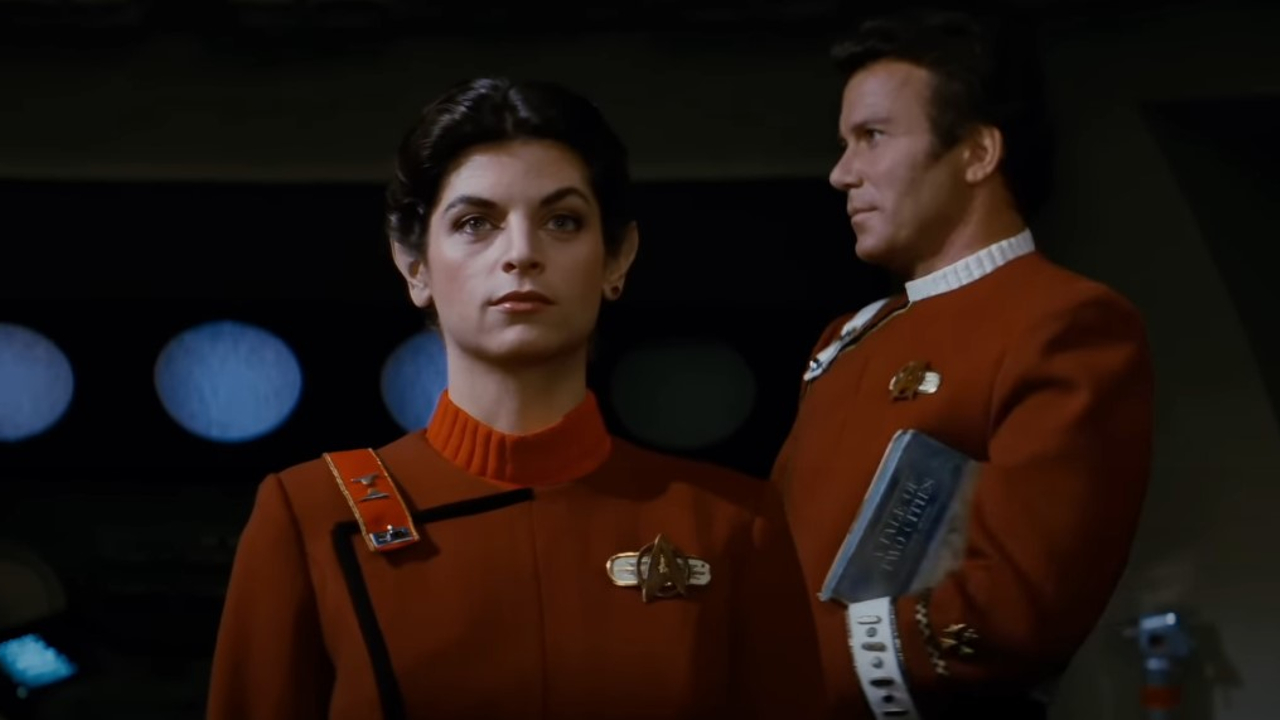 Considered by most to be the best Star Trek movie, 1982’s Star Trek II: The Wrath of Khan has gone down as the most quotable, dynamic, and personal entry in the franchise. After the formidable Khan (Ricardo Montalban) wages war on James Kirk (William Shatner) and Starfleet, the captain of the USS Enterprise must take the battle to the genetically enhanced superhuman and fight fire with fire.

Star Trek II: The Wrath of Khan was Kirstie Alley’s feature-film debut, which makes her incredibly powerful portrayal of Spock’s (Leonard Nimoy) young protégé, Saavik, all the more impressive, especially with the way in which she handles herself next to such accomplished actors. 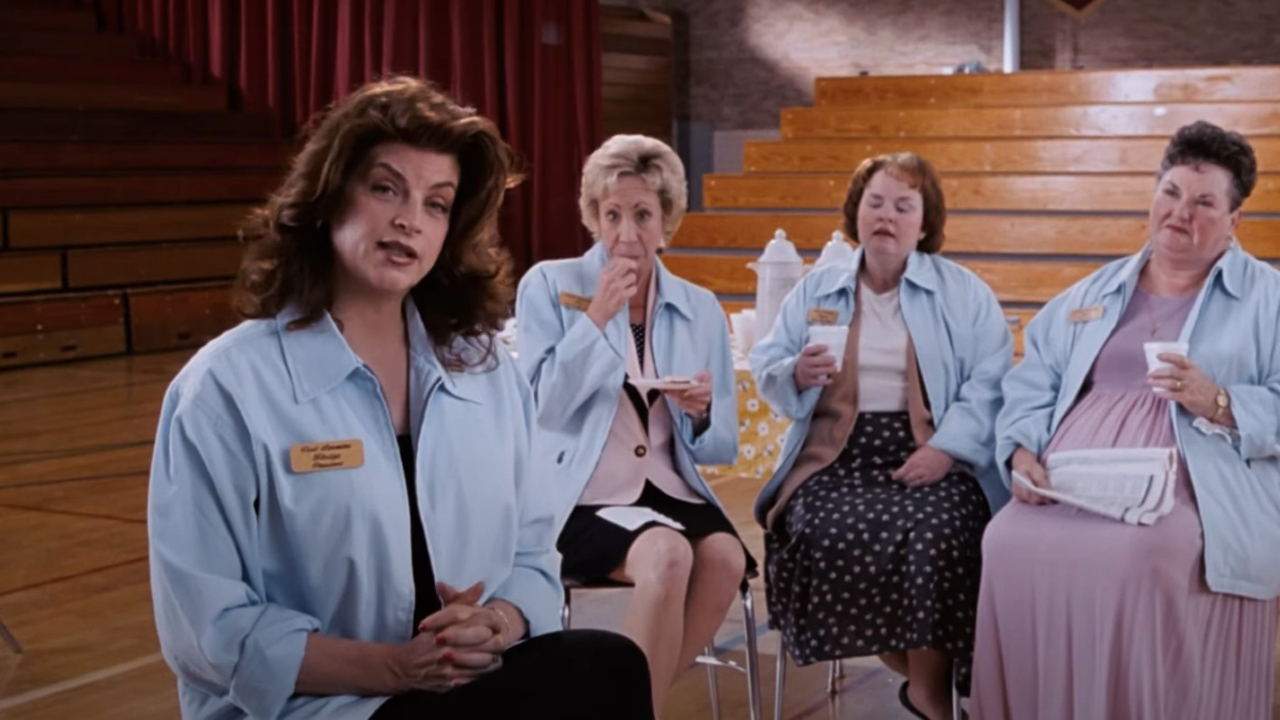 The 1999 dark comedy mockumentary, Drop Dead Gorgeous, centers on the world of small-town beauty pageants, specifically the teenage girls (and their mothers) preparing for the Sarah Rose Cosmetics Mount Rose American Teen Princess Pageant only for the contestants to start dying mysterious, and highly suspicious deaths.

The Drop Dead Gorgeous cast is filled with tremendous actresses from top to bottom with the likes of Kirsten Dunst, Denise Richards, and even star-in-the-making, Amy Adams. One of the best, unsurprisingly, is Kirstie Alley’s Gladys Leeman, the head of the pageant committee, who takes the competition to the extreme in a hilarious performance. 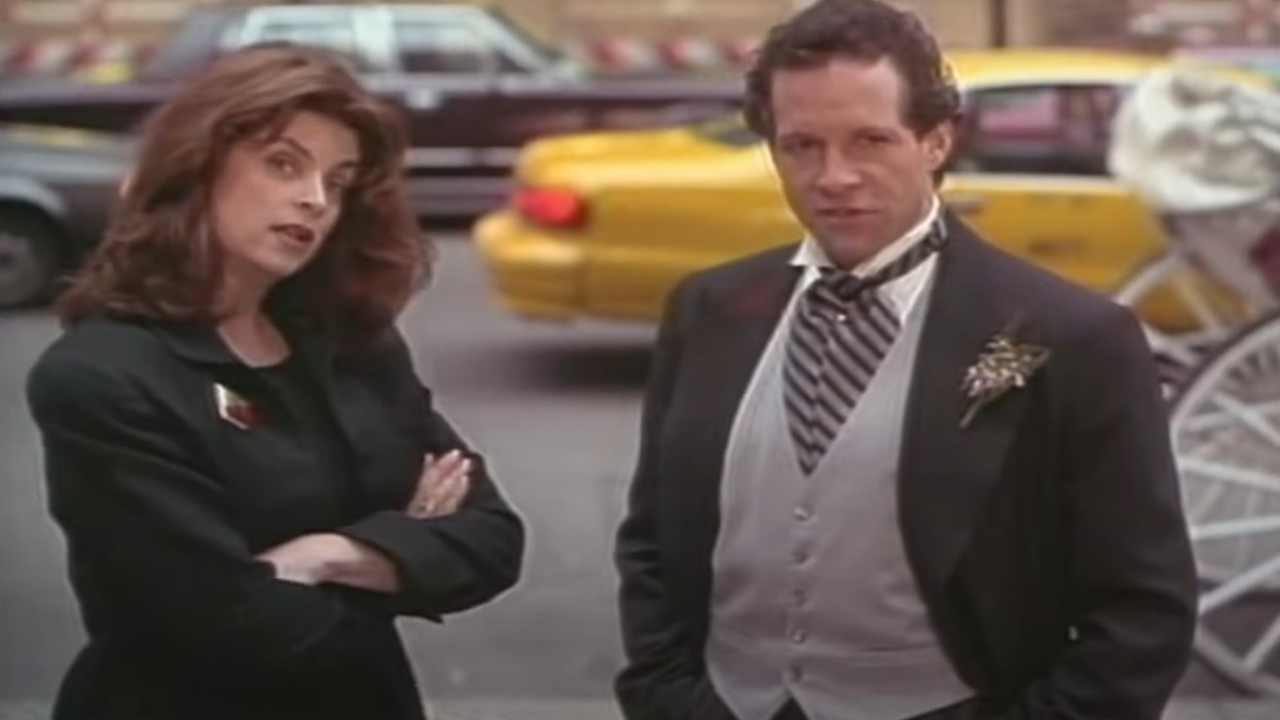 The 1995 comedy It Takes Two follows Alyssa (Ashley Olsen) and Amanda (Mary-Kate Olsen) as two identical strangers who meet at summer camp and put together a plan that will solve all of their problems: swap places and make their caregivers fall in love.

The movie is mostly remembered for the Olsen Twins, but Kirstie Alley, who plays Amanda’s social worker, Diane, and Steve Guttenberg, who plays Alyssa’s father, Roger, add another level of charm to the family-friendly comedy, creating an oldie but a goodie worth revisiting. 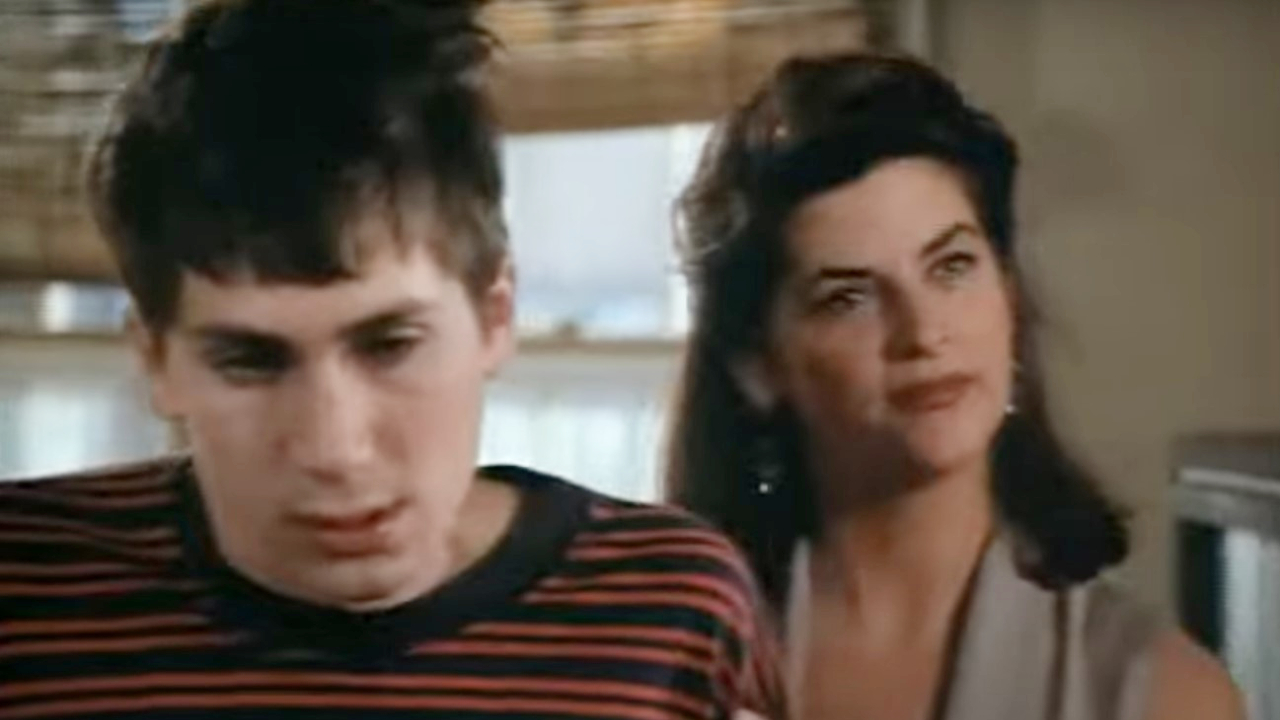 The 1994 CBS movie, David’s Mother, follows Sally Goodson (Kirstie Alley) a divorcée who tries to raise her autistic teenage son (Michael A. Goorjian) and prevent him from being placed in a care home by social services, while also trying to live out her own hopes and dreams.

Alley would win a Primetime Emmy Award for her incredible portrayal of a devoted and caring mother in this, at times, heartwarming and heartbreaking made-for-TV movie. Though not talked about as much as some of her more high-profile movies, David’s Mom is right up there with anything else from her career. 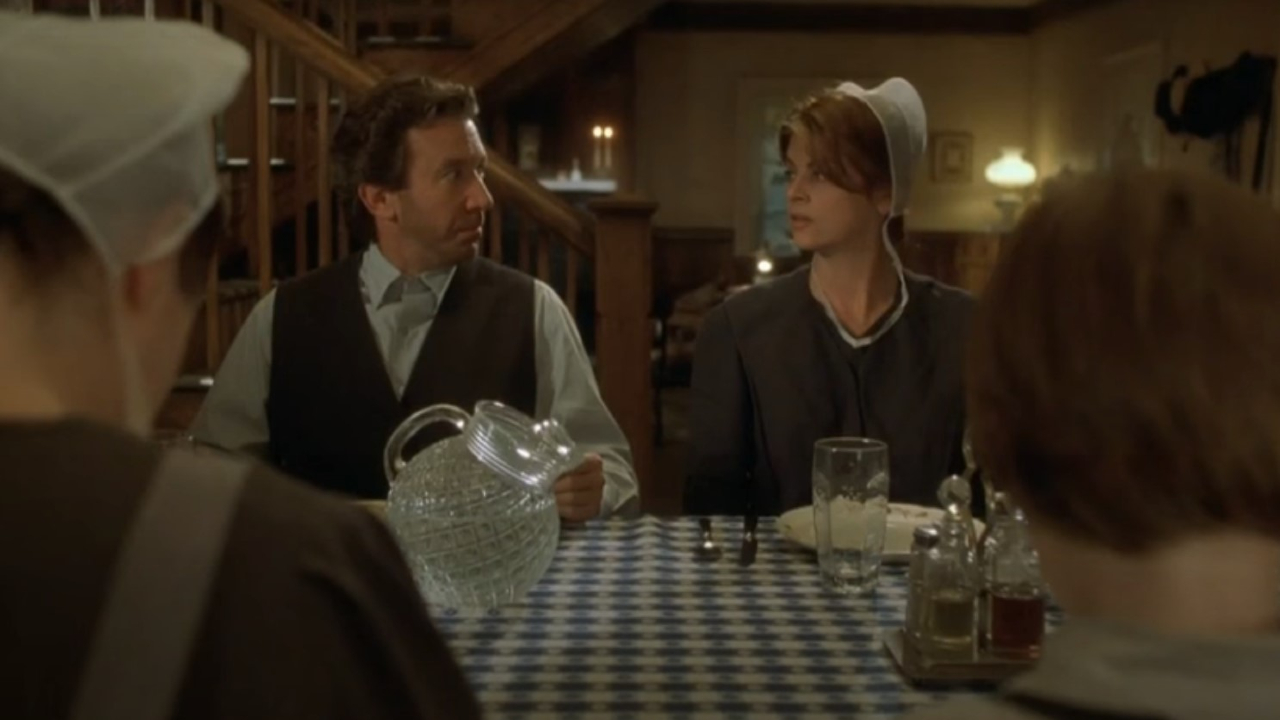 The 1997 comedy, For Richer or Poorer, follows New York City millionaires Brad (Tim Allen) and Caroline Sexton (Kirstie Alley) as they are forced to leave their life of luxury behind and hide out in an Amish community to avoid prosecution by the IRS after their accountant (Wayne Knight) files false tax returns and makes off with their cash.

Two of the biggest TV stars at the time, Alley and Allen are at the top of their respective games in For Richer or Poorer, and give two great performances and seem to be having a lot of fun on screen, despite the movie failing to hit with audiences and critics upon release. 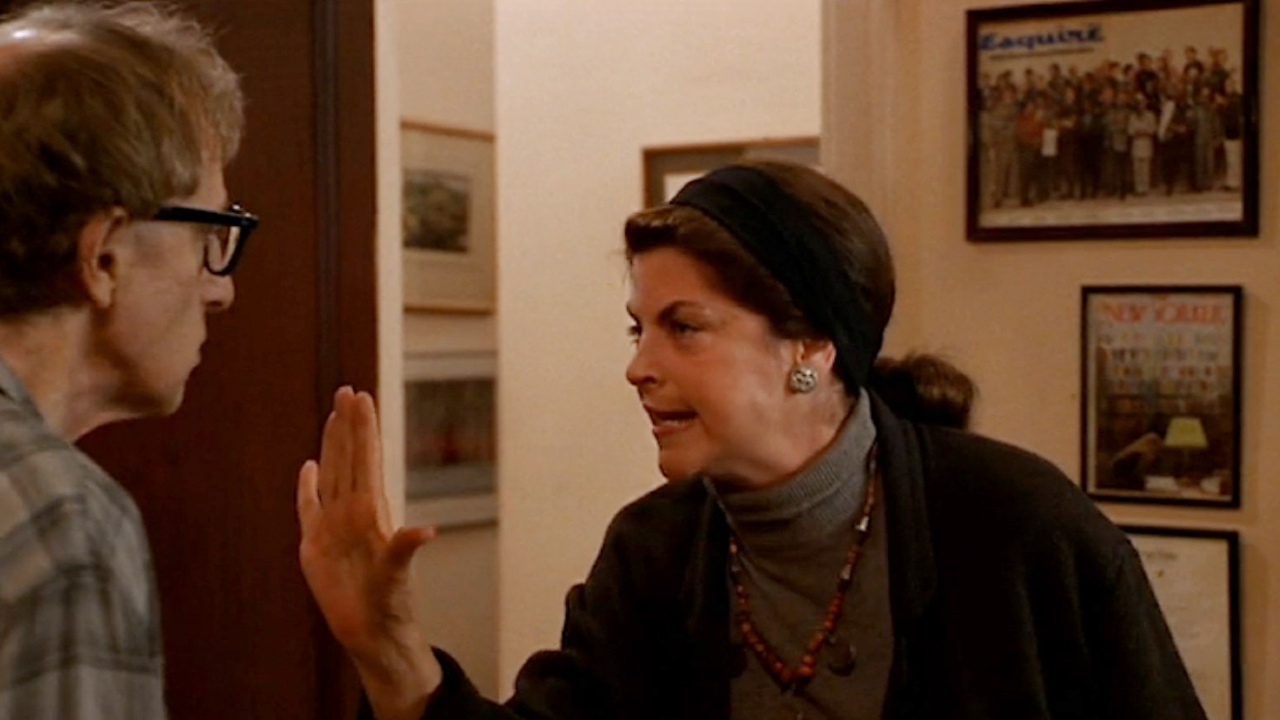 Woody Allen’s 1997 comedy film, Deconstructing Harry, has one of the most impressive casts from the writer-director’s career, with names like Billy Crystal, Robin Williams, Demi Moore, Elisabeth Shue, and Tobey Maguire all appearing. This also includes Kirstie Alley, who plays Allen’s on-screen wife, Joan, who catches her writer husband in an affair.

The scene in which Joan confronts Harry about his infidelity is honestly one of the best of Allen’s filmography, and it balances pure and raw emotion (Joan crying on the floor) with great comedic timing (one of Joan’s psychiatry patients coming in midway), and continues to stand out 25 years later. 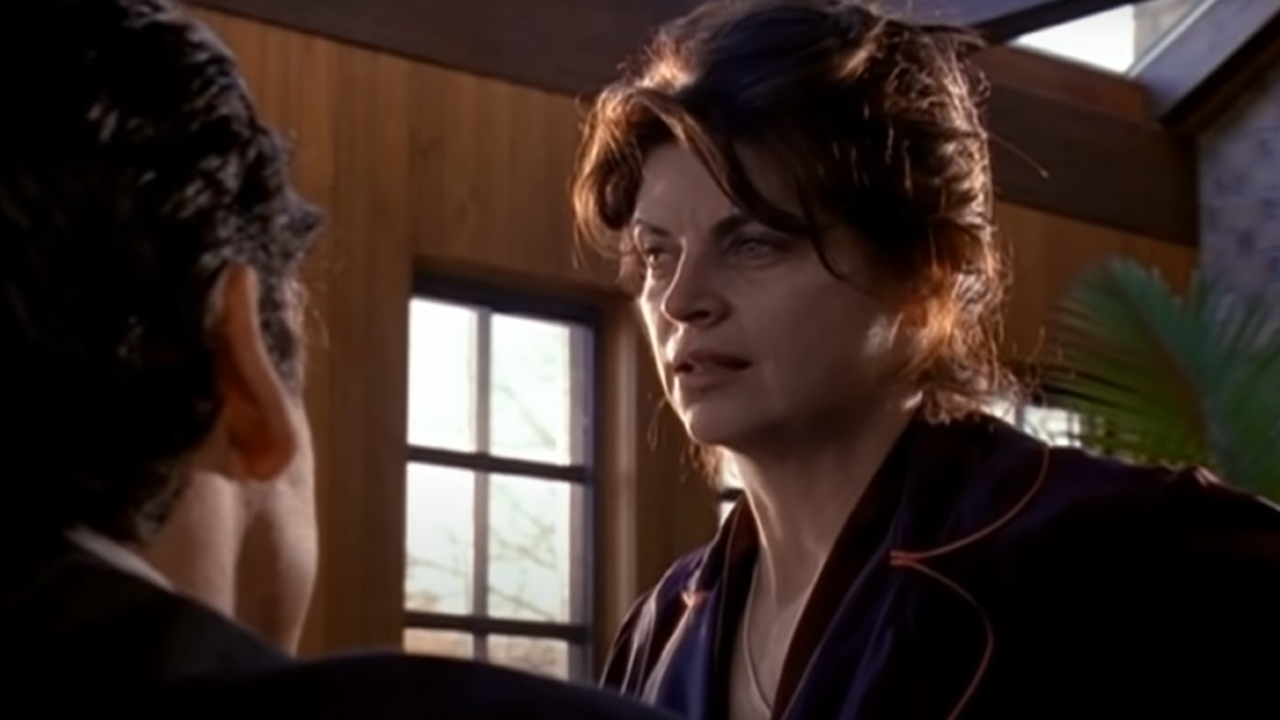 Years after crafting his masterpiece, The Godfather, Mario Puzo wrote another crime epic called The Last Don, which was turned into the 1997 CBS miniseries of the same name. Following the Clericuzio crime family, led by Don Domenico (Danny Aiello), the nearly four-hour story chronicles the ups and downs of the tumultuous family and the crime world in which they are part.

Kirstie Alley plays Rose Marie Clericuzio, the daughter of Don Domenico, who has perhaps the most tragic of all the outcomes in the sprawling epic. The depiction earned Alley heaps of praise, including a Golden Globe nomination. 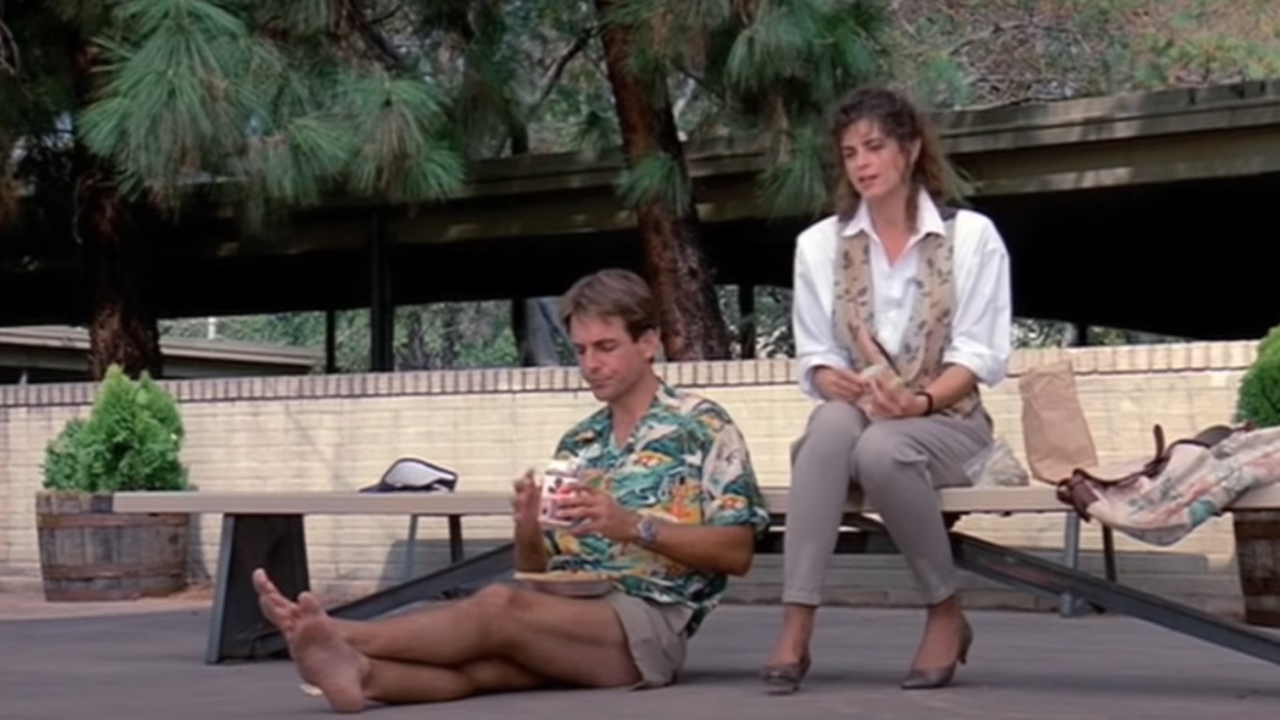 Right around the same time she landed a role on Cheers, Kirstie Alley appeared in the high school comedy Summer School, which saw her play Robin Bishop, the love interest of Mark Harmon’s Freddy Shoop. The movie centers around Shoop, a coach who is tricked into teaching a summer school class, which leads to more than a few hilarious moments.

The pairing of Alley and Harmon really adds another dimension to the immature and goofy 1987 comedy about a slacker coach and a group of rambunctious troublemakers. Too bad it’s not talked about as much as its contemporaries. 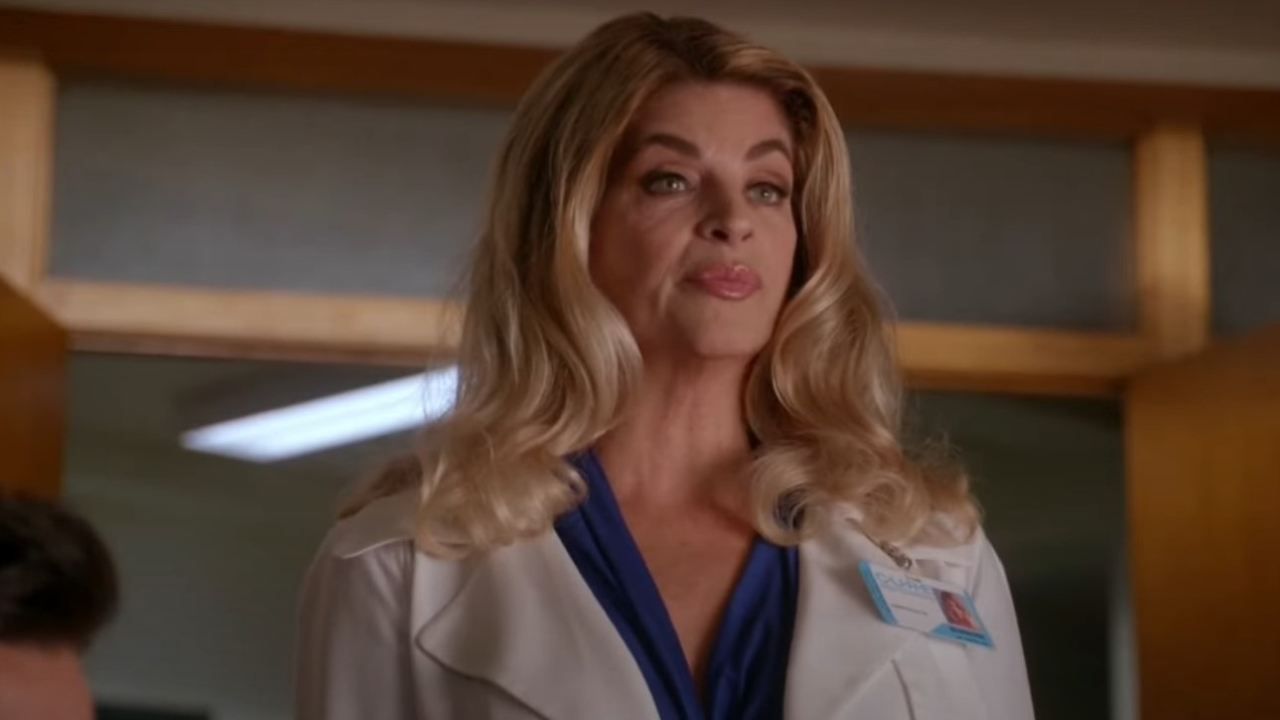 We also have the Ryan Murphy slasher comedy TV show, Scream Queens, which ran on Fox for two seasons between 2015 and 2016. The first season is set on a college campus and follows the faculty and students as they deal with a serial killer who has returned and started to dress up as the school’s mascot, while the second shifted things over to a hospital that finds the main characters once again dealing with a masked killer.

Kirstie Alley joined the Scream Queens Season 2 cast as Ingrid Hoffel, an antagonistic character who makes it her mission to make life miserable for the show’s central characters at every turn. After seeing Alley play more likable characters over the years, it was fun to see her go all-in with her portrayal on Scream Queens. 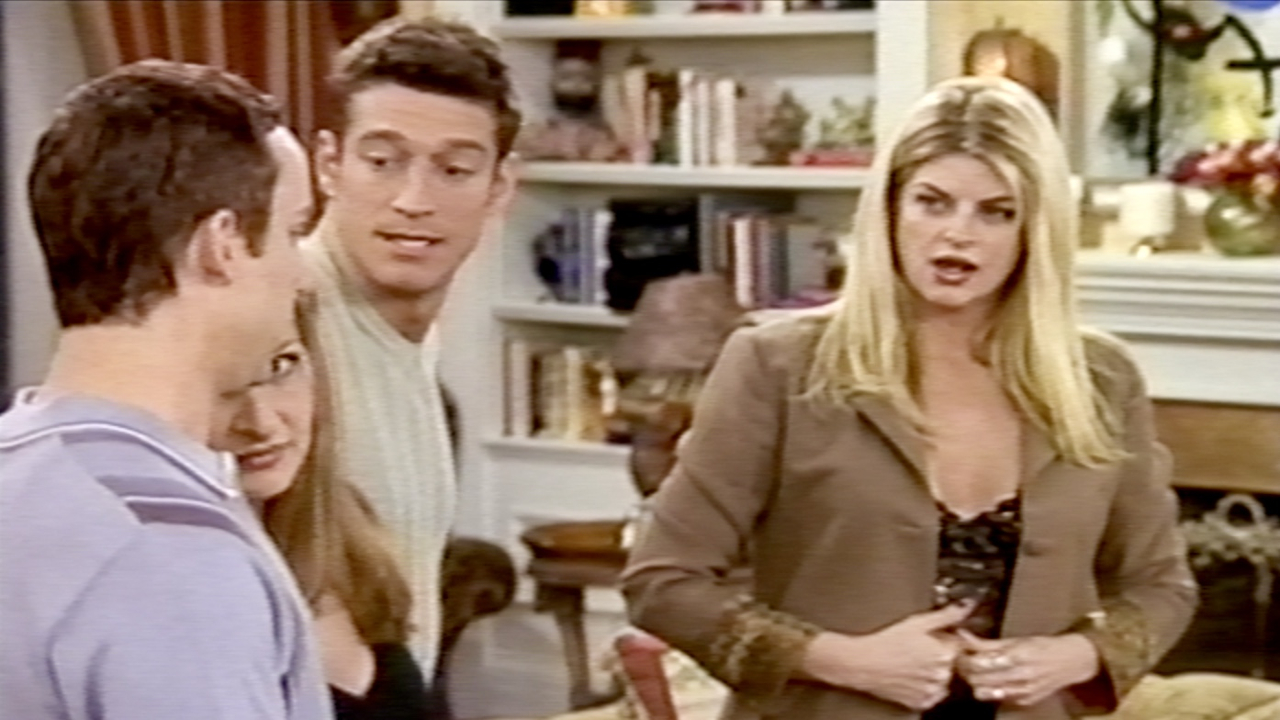 And then we have Veronica’s Closet. A few years after Cheers closed up shop for good, Kirstie Alley found her way back to NBC’s prime-time slate with this sitcom. The series, which debuted behind Seinfeld in the network’s “Must See TV” Thursday-night block, saw Alley play Veronica “Ronnie” Chase, the owner of a lingerie company based in New York City.

The show, which ran for four seasons and earned Alley a number of awards and other accolades, was pretty much inescapable in the late ‘90s and early 2000s, but there is currently no way to watch the series online or on DVD, though we still felt her work in the series needed to be mentioned here.

Kirstie Alley leads behind one hell of a legacy and list of great movie and TV roles that constantly showcased her talent and range as an actress. There won’t be anyone else quite like her…

This article was written by Philip Sledge from Cinemablend and was legally licensed through the Industry Dive Content Marketplace. Please direct all licensing questions to legal@industrydive.com.