Westworld’s structure in season two is really interesting in that, save for the premiere, we only follow a few characters across each episode. Throughout season one, in contrast, each episode at least checked in with all the storylines. And while I like being able to spend more time on individual storylines, I’m also impatient to follow up on some of the cliffhangers — ahem, like when the Man in Black (Ed Harris) meeting his daughter (Katja Herbers) at the end of episode four.

I will say, Dolores (Evan Rachel Wood) and her gang returning to Sweetwater as Maeve and her gang find the Shogun version of Sweetwater made excellent parallel storylines in this episode, “Akane No Mai,” but I’m still eager to return to the other storylines. But first, let’s head to where the bulk of the action takes place this week: Shogun World.

We pick up with the samurai coming at Maeve from the woods. She tries to command him to stand down, but it doesn’t work. After they are captured, Sizemore (Simon Quarterman) informs her it’s because she didn’t use the right language, but buried within all the hosts’ code is the ability to understand and speak Japanese.

It doesn’t matter now, however, because they’ve been captured and are taken into town — which turns out to be the Shogun World version of Sweetwater, complete with exact counterparts of each of their characters.

“Alright, yes, I may have cribbed a little from Westworld. You try writing 300 stories in three weeks,” says Sizemore, who is actually quite funny this episode. His delivery on the line about the “lassos” is particularly great. 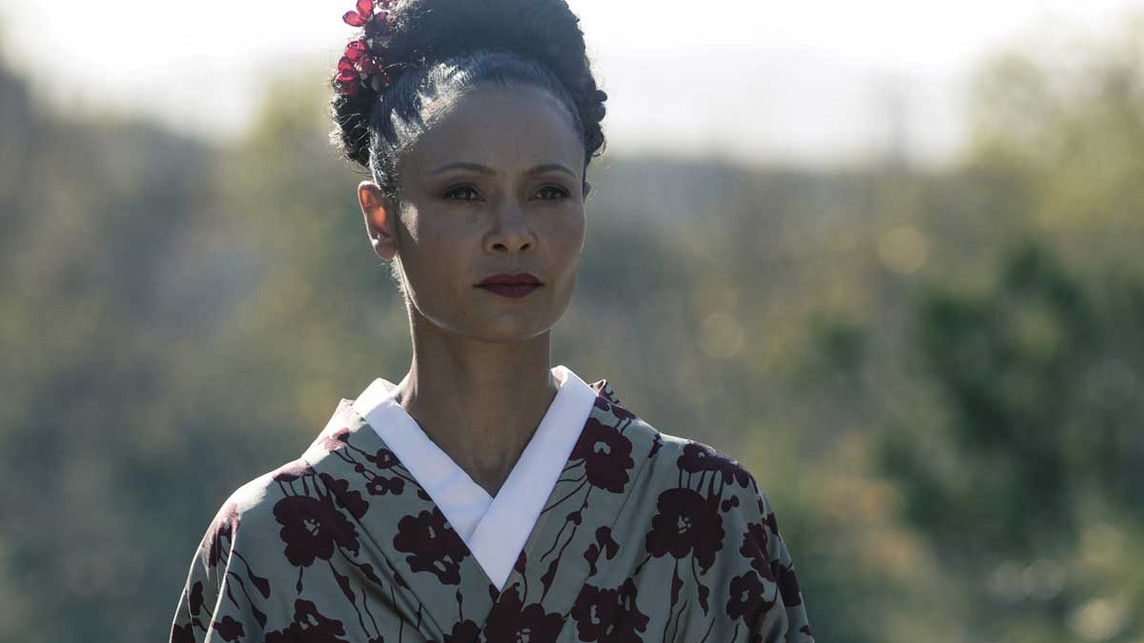 Anyway, when Akane, the Japanese “version” of Maeve (played by Rinko Kikuchi), realizes what’s going on, she agrees to a civilized conversation. It looks as though these two teams are going to join forces — until an emissary for the Shogun appears and demands that Akane’s adopted daughter, Sakura (Kiki Sukezane), be handed over to the Shogun.

Akane refuses and kills the emissary, which means they all need to beat a path out of town before the Shogun realizes what’s going on. Unfortunately, an army of the Shogun’s men shows up before our intrepid band of heroes can escape. A fight ensues, during which we see that Maeve has now mastered non-verbal commands (Hermione would be so proud), put on excellent display when one of the ninjas self-impales right in his own eye after she turns the non-verbal juice on him. It’s an excellent turn of events, except for the fact that in the melee, Sakura gets kidnapped.

While Hector (Rodrigo Santoro), Armistice (Ingrid Bolsø Berdal), and their Japanese counterparts distract the remaining soldiers, Maeve, Akane, Sizemore, Sylvester (Ptolemy Slocum) and Felix (Leonardo Nam) make a break for it to rescue Sakura. When they arrive at the Shogun’s camp, their ruse of being an envoy from the Chinese Empire only works for about five minutes — but in those five minutes, we learn that the Shogun host hasn’t handled his mental freedom very well and is deteriorating, leaking cortical fluid out of his ears and just generally acting pretty crazy. Case in point: To keep his men from being influenced by Maeve’s commands, he cut off all their ears. Of course, he doesn’t know that she has now mastered non-verbal commands and doesn’t need their ears to control them, but I’m getting ahead of myself.

When the jig is up regarding Akane’s identity, the Shogun tells her she can have Sakura… if she dances that night for him alongside her surrogate daughter. She agrees and as she and Sakura prepare for their performance, Akane assures her that soon they’ll be free of this place and can be whoever they want to be. Maeve confides in Akane about her own daughter and says that the stories they’ve been living here are lies, so it’s time for freedom and to be in a new world.

Akane is reticent to throw in with Maeve because she’s too worried about Sakura — that is, until the Shogun skewers Sakura with a sword and forces Akane to dance for him while Sakura lies there bleeding to death. It’s an absolutely heartbreaking moment, but watching Akane turn into a stone-cold assassin is mesmerizing. You can see the exact moment she decides that the Shogun must die, then she starts to dance. She twirls and gestures, all the while getting closer and closer to the Shogun until finally, she saws his head in half with her razor-sharp hairstick. It’s amazing. 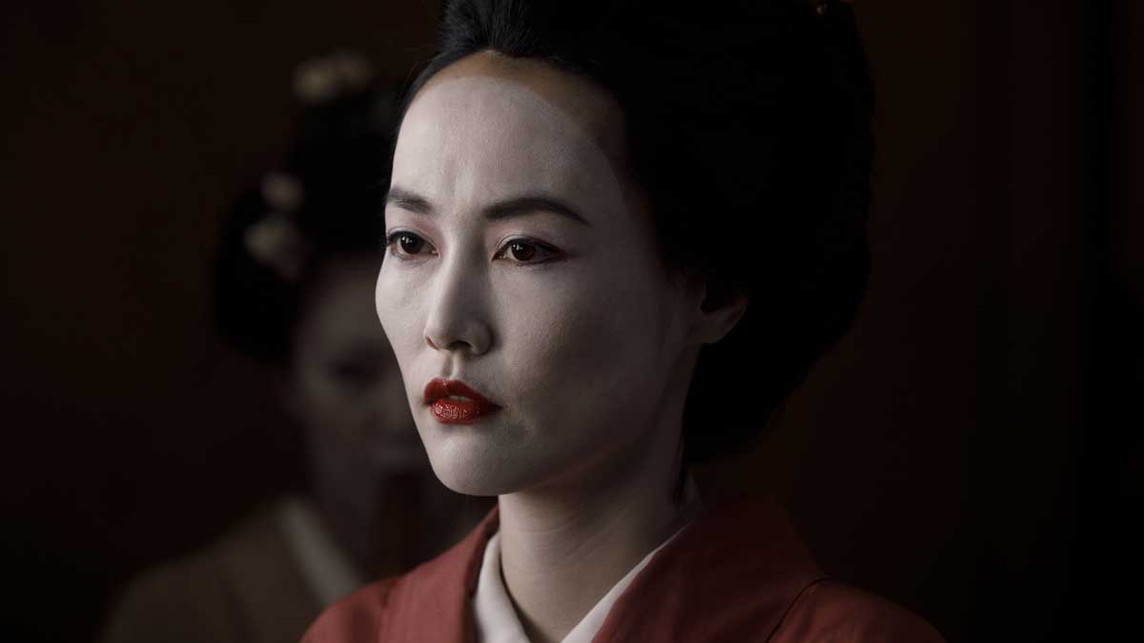 And before the men can execute Maeve and Akane for assassinating the Shogun, Maeve uses her new non-verbal powers to make the men turn on each other. Predictably, all hell breaks loose, with samurais slaughtering each other left and right as Maeve prepares to take on a whole army about to stream into the camp.

That’s where the episode ends, and if that had been the only storyline, it still would have been more than enough to captivate me for an entire hour. There are so many good moments, including some surprising laughs — the aforementioned Sizemore moments, Armistice and her Japanese counterpart studying each other, Maeve telling Sizemore that if he mentions her daughter one more time, she’ll snap him like a matchstick… just a great episode, all around.

And that’s not even the whole episode!

Teddy Gets a Tune-Up

While all this amazing stuff is happening with Maeve, Dolores and her crew are rolling into Sweetwater. She wants to fix the train so they can use it to go after her father. That’s the only action on this thread this week because the focus is almost entirely on Dolores and Teddy’s (James Marsden) relationship, and it is some excellent character development.

I have wondered since the season one finale how Teddy would deal with the Wyatt half of Dolores’ personality. She has some clear goals and is not afraid to shed (a lot of) blood to achieve them. Teddy, meanwhile, is one of the gentlest hosts around, and this week it all comes to a head when he asks Dolores if she’ll just stop all the fighting and settle down with him somewhere.

I had the actual strains of “Somewhere” from West Side Story playing in my head during this scene. Teddy’s so earnest about wanting a place for them to live, “peace and quiet and open air… waits for us, somewhere” and all that. But that’s not the plan. 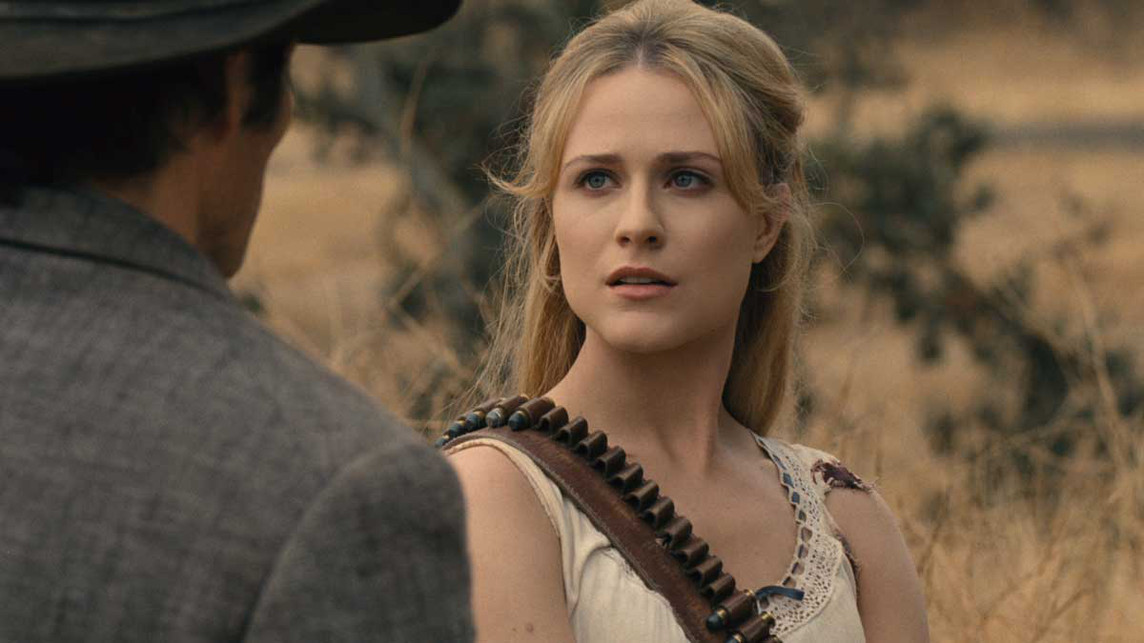 Now, I would argue Dolores’ feelings for Teddy haven’t actually been real until this episode. She has liked him fine, but she truly let herself love him in this episode. They achieved true intimacy, something she hasn’t had since William (Jimmi Simpson) all those decades ago. What’s interesting is that as she says goodbye to Dolores and embraces the Wyatt in her, she’s still dead-set on finding her father. That seems a little incongruous with this new Dolores who eschews sentimentality.

Anyway, after the night with Teddy, she forces a technician to alter his personality, driving down his compassion and raising his mental acuity and hostility.

It’s a sad moment and a real turning point for the season, so it’s appropriate this happens at the halfway point. Another incredibly sad moment also happens in this storyline this week. It’s not really germane to the action, but when the old Clementine (Angela Sarafyan) sees the new Clementine (Lili Simmons) and mouths along with her old dialogue as her eyes fill with tears? It might be the saddest thing this show has ever done. Just gut-wrenching.

But it’ll be very interesting to see what Teddy is like after his little tune-up, particularly because it’ll be nice to see Marsden flex his acting muscles a bit. The guy can act, and I can’t wait to see him portraying something other than the stalwart hero, especially because it looks like Teddy is not long for the world…

The brief glimpse we get of Bernard (Jeffrey Wright) this week shows him back at the Mesa in present day (two weeks after the incident), looking on as the drowned hosts from the flooded valley are brought in. The noteworthy scene here, however, is when a tech tells Head of Operations Strand (Gustav Skarsgård) that about a third of the hosts they took out of the lake are blank.

And that’s not the weird part. The weird part is that the drives weren’t wiped clean of data. The drives never held data at all. So what is going on? Did Dolores manage to make an army of blank hosts to help her fight the humans?

Or was it Ford’s doing? Does it have to do with the park’s little side project involving human consciousness? So many unanswered questions, and maybe the biggest one of all is how did Teddy drown with the other hosts?

One thing is for sure — the back half of Westworld season two looks incredibly compelling.