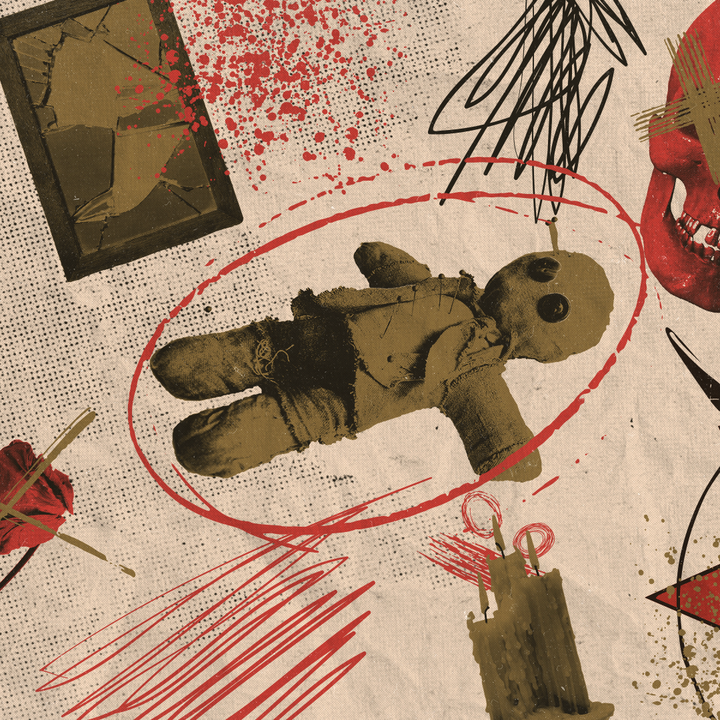 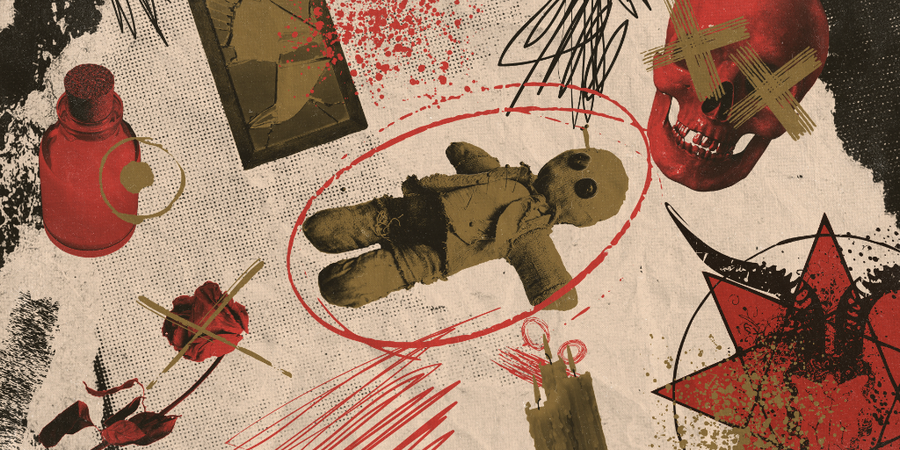 Voodoo on Film: Fact and Fiction

Hollywood loves a voodoo villain. In popular usage, the word “voodoo” connotes dark magic and the occult. It conjures spooky images of gaunt men in dark clothes and top hats, zombies, and dolls stuck through with pins. Since the early twentieth century, pop culture has turned voodoo into a cultural shorthand for the mysterious, magical, and evil.

But the fear of voodoo in American culture runs much deeper than a generalized fear of black magic. In fact, most cultural representations of voodoo are not only inaccurate, but subconsciously steeped in racism and the complicated history of slavery in the Western hemisphere.

Louisiana Voodoo (or “New Orleans Voodoo”) is a set of religious folkways that evolved from the traditional West African practice of Vodun. Vodun, meaning “spirit” in the Fon and Ewe languages of Benin and Ghana, emphasizes ancestor worship, sacrifice, and priestly rites and rituals.

The Atlantic Slave Trade deliberately suppressed African culture in enslaved people. Their practice of Vodun went underground, where it melded with Catholicism and the Francophone culture of New Orleans. The result? A syncretic, expansive means of spiritual expression known today as Louisiana Voodoo.

Louisiana Voodoo is often confused with Haitian Vodou, another diasporic evolution of Vodun with which it shares many commonalities, and Deep Southern hoodoo, the ethnobotanical, magical application of the same spiritual beliefs.

In practice, voodoo involves the use of charms and amulets to protect, heal, and, occasionally, bring harm upon others. Like Vodun, voodoo centers on respect for elders and veneration of ancestors, the spirits that govern the natural world, and a Supreme Creator called Bondye (a bastardization of the French “bon dieu” meaning “good god”).

So, if voodoo is a folk religion, why has the word become interchangeable with “evil” in Hollywood? 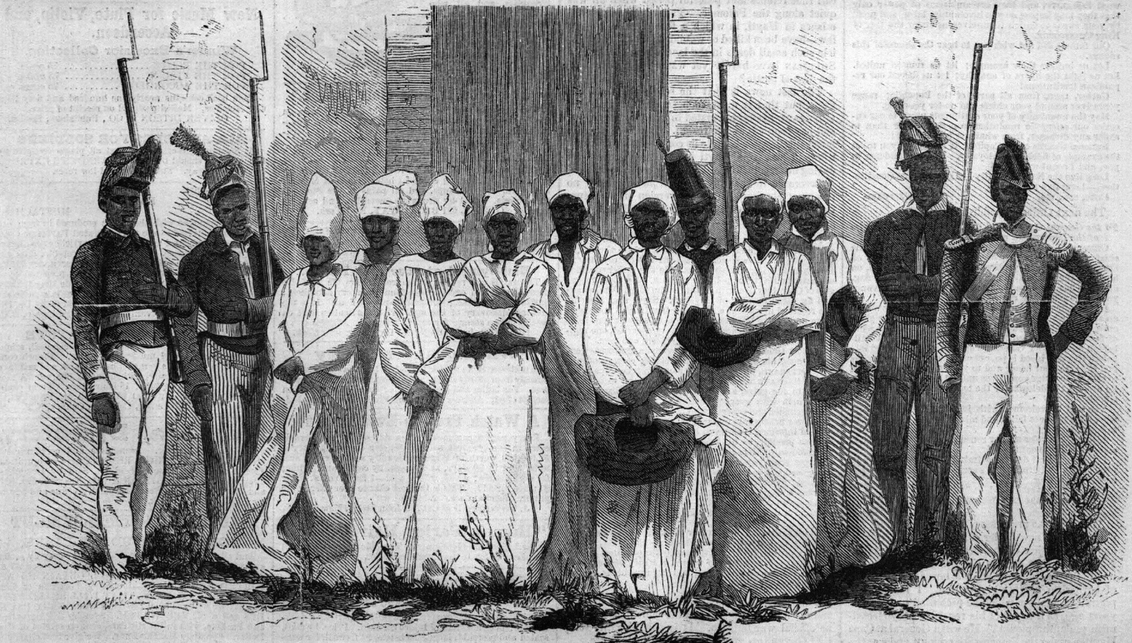 Fear of voodoo in the United States can be traced all the way back to the Haitian Revolution. Haiti, formerly known as Saint Domingue, was a French colony in the Caribbean dedicated to the cultivation of sugar cane. To supply Europe’s insatiable demand for sugar, Saint Domingue relied on an incredibly harsh and brutal system of slave labor.

On a hot August night in 1791, a number of slaves attended a secret Vodou religious ceremony at Bois Caïman, just as a tropical storm blew in over the island. The meeting was part religious ritual, part revolutionary strategy meeting, presided over by prominent Vodou priest and local leader Dutty Boukman. As the storm raged, the slaves planned their revolt against the masters, taking the lightning and thunder as auspicious signs for their cause. In the days that followed, they struck out fast and hard against their oppressors, decimating the colony’s wealthy Northern Plain and sparking what would become the only slave uprising to result in the formation of a sovereign nation both free from slavery and ruled by black former captives.

For a slaveholding nation like the United States, the Haitian Revolution posed an enormous ideological threat. President Thomas Jefferson, a slaveholder himself, actively campaigned for the new Haitian republic to fail, refusing to trade with Haiti for fear that its success would empower America’s own slave population.

Concerns about the aftereffects of the Haitian Revolution led directly to the demonization of Vodou. French colonists in America cracked down on the practice of voodoo in Louisiana, and exaggerated stories of Vodou in the media detailed rumors of ritual sacrifices, zombies, and other terrors.

The most notable of these was the controversial Bizoton Affair in 1864, wherein eight Haitian Vodou practitioners were put on trial for the alleged ritual sacrifice and cannibalization of a young girl. The truth of the case was lost in a mire of sensationalized reporting, itself emblematic of the way the world viewed Haiti and its traditional religion.

The ritual at Bois Caïman, and by extension Haitian independence, became shrouded in mystery and filled with demonic significance. Long before Hollywood made hay with voodoo’s evil reputation, the association had been consciously stoked as a means of upholding white hegemony in the Western world. 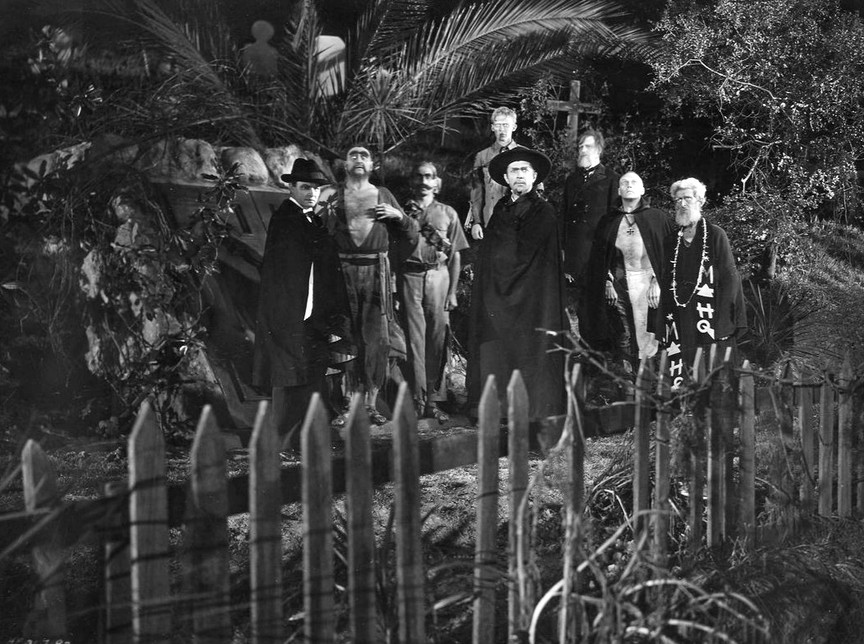 The first representation of voodoo in film was in White Zombie (1932), the first feature-length zombie film in cinematic history. Directed by Victor Halperin, the movie stars Bela Lugosi as a white Haitian voodoo master named Murder Legendre (subtlety had not yet been invented) who uses his sinister knowledge of spells and potions to transform a young woman into a zombie.

With Lugosi, already world-famous for his performance as Dracula a few years before, the movie conflated one misunderstood, exotic Other (Lugosi) with another (the practice of voodoo), and the rest was history. Instant voodoo villain, just add water.

Sensationalized zombie imagery would continue to be associated with voodoo in film. But at least one depiction of zombieism seems to be rooted in truth. The Serpent and the Rainbow (1988) tells the story of a scientist investigating the mysterious case of a Haitian man who was transformed into a zombie. The movie, loosely based on a non-fiction book of the same title, was inspired by the life of a man named Clairvius Narcisse. Narcisse claimed to have been poisoned, buried, and revived as a zombie, returning to his bewildered family 18 years later.

Of course, zombies aren’t the only signifier of voodoo’s malevolence in film. White Zombie also features another all-important visual symbol — the voodoo doll. Voodoo dolls occupy a curious space in voodoo representation. In pop culture canon, there is no more ubiquitous image. Voodoo dolls feature everywhere from enormous blockbuster films (Pirates of the Caribbean: On Stranger Tides) to family-friendly animated Disney features (The Princess and the Frog) to critically-lauded dramas (Eve’s Bayou).

When you think of voodoo, a voodoo doll is probably the first thing that comes to mind. In actual practice, however, voodoo dolls have no real place in either Louisiana Voodoo or Haitian Vodou. They primarily exist as a way of exploiting and commercializing on the common and virulent misconception that voodoo is all about hexes and curses.

Some of the most general depictions of voodoo characterize it as a catch-all for any kind of black magic, especially when the story takes place in the American South. Case in point: The Skeleton Key (2005). Kate Hudson stars as Caroline, a Louisiana hospice nurse who becomes the caretaker of an old plantation house and discovers that her ailing patient’s condition is actually the result of a malignant hoodoo spell. The plot hinges on the idea that two of the house’s former servants, a pair of African-American hoodoo practitioners, use body-swap magic to live on in the bodies of unsuspecting victims. Though spiritual possession is a feature of some voodoo beliefs, it usually means being possessed by one of the loa, spiritual intermediaries for Bondye, not by another human being. Body-swapping, as the movie portrays, has little relevance to actual hoodoo magical practice. While the film trades on the audience’s ignorance to sell its big twist, its questionable racial implications feed right back into familiar negative stereotypes about voodoo and the people who practice it. 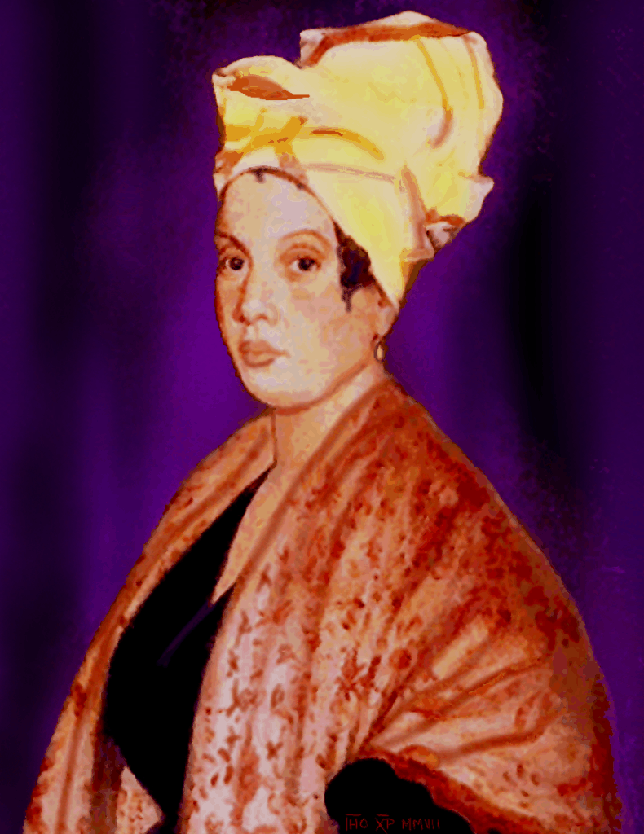 Though Hollywood is famous for commercializing on misconceptions, in a few cases, it has gotten voodoo (sort of) right. Images of voodoo queens, priestess-leaders like the famous New Orleans-native Marie Laveau, are sprinkled across TV and film, including a few of Laveau herself. Angela Bassett played a campy version in American Horror Story: Coven in 2013. The representation of voodoo queens is, on the whole, more positive than most references to voodoo.

The Princess and the Frog avoids a stereotypically negative portrayal of voodoo with its inclusion of voodoo queen-cum-Fairy Godmother named Mama Odie, though its villain, a voodoo bokor (witch doctor) named Dr. Facilier, is predictably spooky. 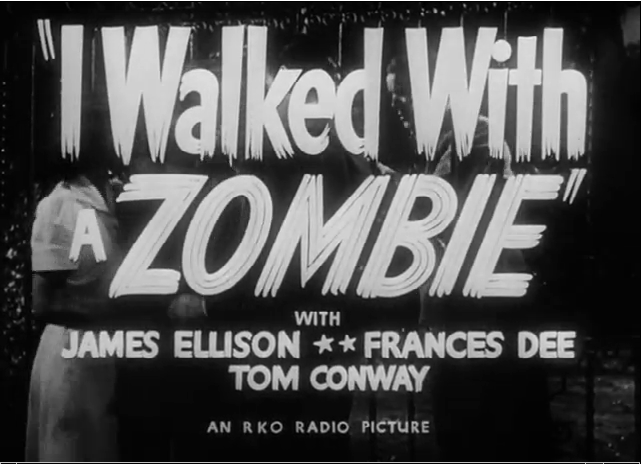 Surprisingly, the most accurate silver-screen portrayal of Voodoo/Vodou may belong to a film from 1943 called I Walked with A Zombie. The movie, which features yet another beautiful young woman reduced to a zombie-like catatonic state, treats its Vodou practitioners with an unusual and unexpected level of respect, especially considering when it was made.

Though not perfect — there are stereotypical depictions of zombies and voodoo dolls, but welcome to Hollywood — the film also goes out of its way to use appropriate Vodou terms like “houngan” (a male Vodou priest) and “houmfort” (a Vodou temple). In the end, the true villain of the piece is an arrogant outsider who attempts to wield the power of Vodou without understanding. The religion, we are given to understand, is not inherently evil, though it is certainly not to be treated lightly.

The negative representation of voodoo in film draws on a long history of religious and racial persecution. Familiar, damaging stereotypes grew into an easy Hollywood shorthand to endow some characters as evil villains and others as tragic innocents. The result is a cultural landscape where nearly all depictions of voodoo in film and television divorce the religious from the magical and reduce the magical to the malicious, making “voodoo” synonymous with “bad”.

Still, with tides of public opinion shifting toward greater cultural understanding, the future of Voodoo on screen is bright. As Hollywood deepens its understanding of the stereotypes that got us here and how we’ve internalized them, we can move the needle from voodoo dolls to portrayals with greater sensitivity.