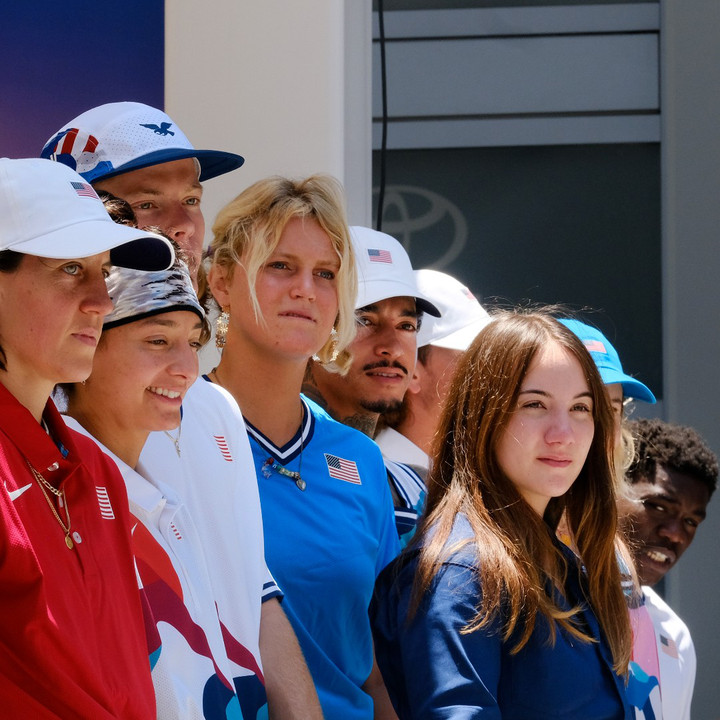 LOS ANGELES (AP) — The 12 members of the first U.S. Olympic skateboarding team stepped on their boards and skated through a corridor of tall American flags in a joyful pack, headed toward an outdoor stage to meet the world together.

It was an appropriate introduction for a bunch of world-class skaters who will represent the best aspects of this American-born sport in Tokyo: No leaders, no followers — and plenty of love and support for the whole crew.

“I don’t know if any of us imagined we would ever be up here getting ready to skate in the Olympics,” said Nyjah Huston, the five-time world champion and California native recognized as the highest-paid skater in the sport’s history. “But we’ve all been working for this from a young age, even before it was possible.

“I love skateboarding because it’s the funnest thing on Earth, not only if you’re one of us getting ready to skate in the Olympics, or just a kid out there skating in your skate park,” Huston added. “It’s the freedom, the love that brings us together, and then the nonstop challenge, the progression. Skateboarding is the best.”

Huston is the most famous face among the 12 U.S. Olympians, who range from smiling teenagers to accomplished 30-somethings of different races, sexual orientations and gender identifications. They’ve all competed at their sport’s highest level, and they’re all eager to perform when competition gets underway July 25 at Ariake Urban Sports Park.

Huston is joined by Jagger Eaton and Jake Ilardi on the men’s street team, while Mariah Duran is teamed with Alexis Sablone and Alana Smith in the women’s street competition. Bryce Wettstein, Brighton Zeuner and Jordyn Barratt are the U.S. women’s park team, while Zion Wright, Heimana Reynolds and Cory Juneau compose the men’s park team.

The group was appropriately unveiled in Southern California, where the sport was invented roughly 70 years ago in the parks, streets, plazas and empty swimming pools of 20th century America’s sunshine wonderland.

Decades after the likes of Tony Hawk, Mark Gonzales and Rodney Mullen carried this charismatic pastime into worldwide competition and capitalism, skateboarding has reached the pinnacle of sports.

Josh Friedberg, a lifelong skater who now serves as USA Skateboarding’s CEO, teared up repeatedly on June 21, both before and after he introduced the team.

“I think the weight of what we’ve accomplished is finally sinking in,” Friedberg said. “It was an overwhelming and exhilarating day to be here, to have the chance to work on something since you were 13 years old, and to finally have the chance to share that with the world.”

While the skaters all seemed thrilled by the spotlight trained on skateboarding, the American team also reflected the slight ambivalence among many lifelong skaters still adjusting to the Olympics’ welcoming inclusion of their beloved sport while it’s still frowned upon or outright criminalized in large public parts of the world — and while many skaters still don’t warm to the competitive aspects of what they consider a friendly, communal lifestyle pursuit, not a cutthroat athletic endeavor.

Some longtime skaters are still conflicted about how skateboarding’s welcoming ethos fits into the competitive Olympic framework — and that includes the 34-year-old Sablone, who is also an architect and artist living in New York.

“I never, ever would have expected this,” Sablone said. “Skateboarding is about freedom and all that stuff. In some ways, it’s not about competition, but here we are. … It’s not something I ever predicted, but it’s an incredible honor to be here doing this.”

Sablone noted that the sport’s tradition of free expression and individuality shone through even in the U.S. skaters’ choice of kits for their unveiling: Given several items of Team USA gear to choose from, all 12 skaters picked a unique look.

“Skateboarding has always been a home for me,” said the 20-year-old Smith, who became the youngest medalist in X Games history in 2013. “Growing up in not a very good household, the people that I’ve met through skateboarding have been my rocks. Every time I needed something, skateboarding was always there for me. I started all this at the lowest point, and I would like to say that this is one of my highs, and I get to do it with really great people.”

This article was written by Greg Beacham from The Associated Press and was legally licensed through the Industry Dive publisher network. Please direct all licensing questions to legal@industrydive.com.