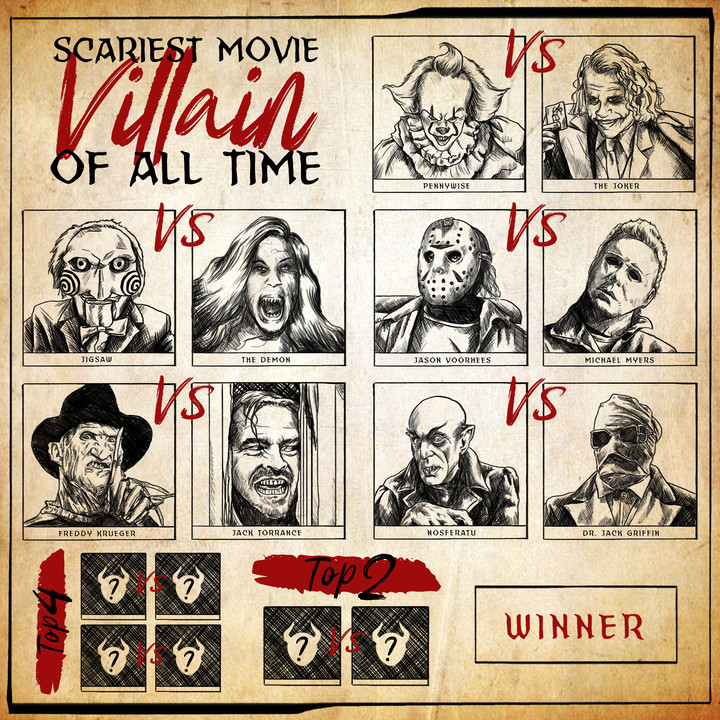 The Scariest Movie Villain of All Time Showdown

It’s that time of year again. The air is turning colder, the days are getting shorter, and Halloween is right around the corner. It’s spooky season, and high time to consider the scariest movie villain of all time. This list spans decades, crimes and creatures that all have one thing in common: They are evil… and they’re coming for you.

Vote for who freaks you out the most and check back soon to see which petrifying perpetrators move on to the next round.

Pennywise vs. The Joker

In one of the creepiest roles in recent history, Bill Skarsgard’s turn as Pennywise – the evil, shape-shifting, kid-eating clown from Stephen King’s “It” – is something that will haunt viewers for decades to come. As a remake of the 1989 miniseries, the film follows a group of small-town youths being stalked by the monster, who, to make matters worse, continuously changes to embody their deepest, darkest fears.

Played by Jack Nicholson, Heath Ledger, Jared Leto, Joaquin Phoenix, and many, many others over the years, few bad guys compare when it comes to Batman’s longtime nemesis the Joker. With an origin story that sways between a chemical waste accident, mental illness and an abusive past, one thing remains clear: he’s another mass-murdering clown-face out for blood and revenge against the innocent, the guilty, and anyone who gets in his way.

Jigsaw vs. The Demon

If you’ve seen “Saw” or any of its seven sequels, you know just how disturbing the Jigsaw Killer is. Earning his name from the puzzle-shaped chunk of flesh he cuts from his victims, ex-civil engineer turned serial killer John Kramer (Tobin Bell) preys on people who he believes take their lives for granted. After surviving a suicide attempt, he begins to kidnap various subjects, placing them in deadly, pain-filled scenarios in a psychotic scheme to test their moral characters.

The main antagonist of the “Paranormal Activity” series is the Demon, a horrifying dark spirit that feeds on negative energy and relentlessly haunts the families of two unfortunate sisters. Caught on home security tapes that evoke the shaky terror of “The Blair Witch Project,” the footage reveals the Demon’s menacing, violent attacks on its victims – as well as its penchant for deadly possession.

Jack Nicholson is unforgettable as Jack Torrance in Stanley Kubrik’s 1980 horror classic, “The Shining.” He’s creepy from the get-go, but as we watch him encounter the hair-raising spirits of the Stanley Hotel and truly start to lose his mind, all hell breaks loose. Ghosts and vampires are one thing, but a murderous lunatic set on killing his wife and kid? That’s some cold, hard horror for you.

Another killer who preys on children? 1984’s terrifying Freddy Krueger of “A Nightmare on Elm Street” and sequels. Written and directed by the master of horror Wes Craven (and Johnny Depp’s movie debut!), this slasher flick is particularly unsettling due to the murky line it draws between dreams and reality – and, you know, that hellish bladed glove Freddy uses to kill his victims in their sleep. Still not scared? Then think about the 500 gallons of fake blood used during the production of the first movie alone.

15 years after murdering his older sister as a young boy, in “Halloween” and nine subsequent releases, Michael Myers returns to his hometown to carry out his quest for more and more blood. John Carpenter’s chilling creation has haunted generations of movie-goers who keep coming back for more to get another look at the face of pure evil – a mask that happens to be made from a cast of William Shatner’s face.

We find yet another masked mass murderer in “Friday the 13th”’s blood-thirsty menace, Jason Voorhees. Although his mom does the killing in the first installment of the 12 movies, seeking revenge on her son’s death by drowning, it’s Jason himself that rises from the dead to torment camp counselors, young people and society at large in the sequels. If that machete and hockey mask don’t keep you up at night, we don’t know what will.

This list wouldn’t be complete without the OG vampire villain, 1922’s Nosferatu. Despite the fact that this pale, blood-sucking, long-finger-nailed freak was a ripoff of Dracula (written by Bram Stoker in 1897), Count Orlok remains one the 20th century’s most notorious and influential bad guys on film – made all the more scary and memorable with early German Expressionist cinematic techniques.

The Invisible Man happens to be another literary villain created in 1897 by H.G. Wells, making him an apt match-up here. The crazed scientist who discovers the key to invisibility closely follows the plot of the book in the 1933 original film, as Griffin goes on a murderous rampage with the goal of world domination.

This year, “The Invisible Man” gets a reimagining in a new movie starring Elizabeth Moss as a woman whose abusive ex fakes his own suicide only to stalk and torment her under the guise of invisibility. A thriller worthy of any evening in October and beyond.