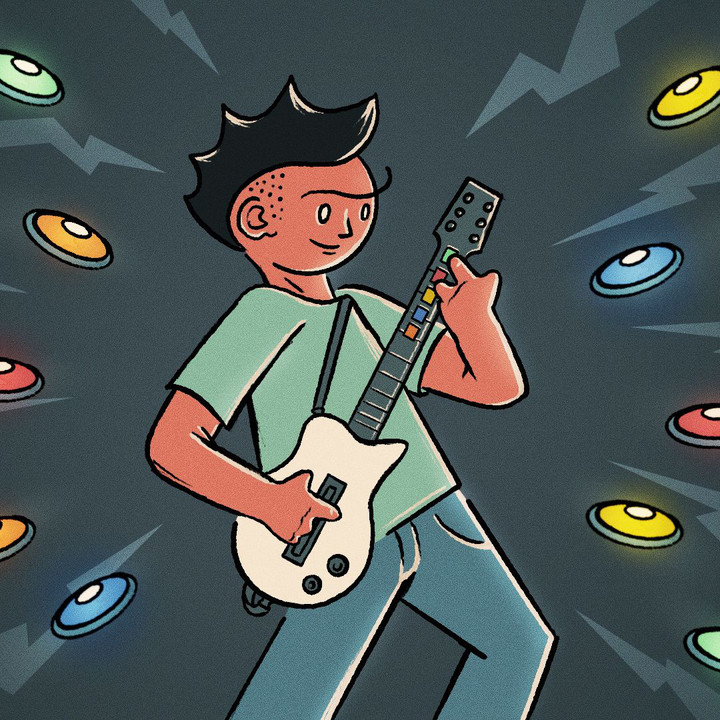 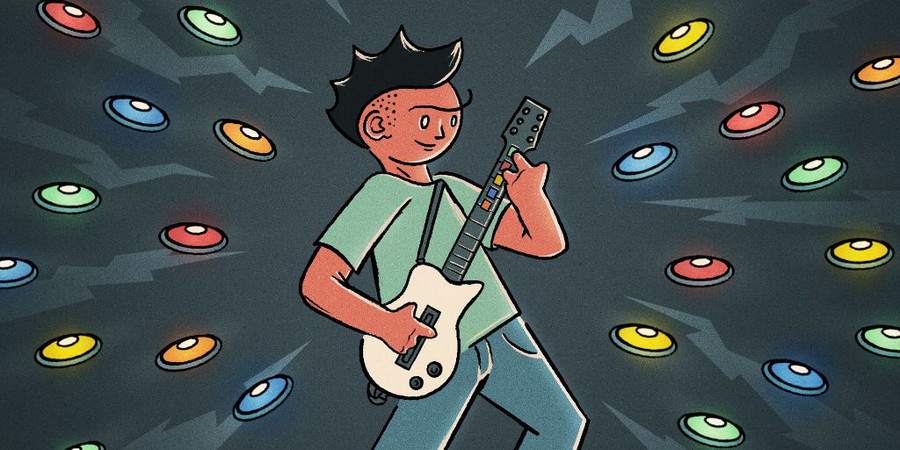 The Rise of Guitar Hero, Rock Band, and Rhythm Gaming

You’re driving home from a grueling eight-hour shift. For many, the day is over as soon as they clock out, but your work is just getting started. Then, the White Stripes’ “Seven Nation Army” blares through your car’s modest stock speakers, that familiar bassline encircling you for 15 magical seconds. The music takes you away as you roll up to a stoplight and step into the shoes of Jack White, strumming along with the earworm of a melody. The world slows to a stop around you. For one fleeting moment, you’re a rock star.

With your foot on the gas pedal, you hit the expressway and envision what you’re going to do with your 30 minutes of free time tonight. You’ll load up Guitar Hero or Rock Band and live out those fleeting dreams of hitting it big. Those games are the last bastion of a genre that has, unfortunately, all but died out over the past decade. But in their heyday, they were some of the biggest, most exciting titles to happen to the industry, as well as the intersection of gaming and music in general. 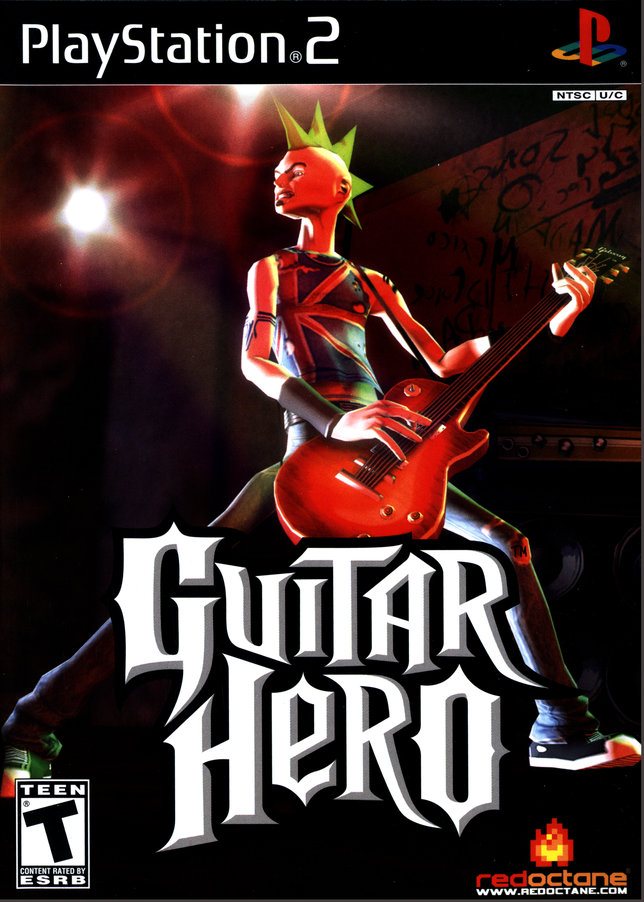 Oddly enough, the Guitar Hero (and later Rock Band) franchises are a bit of an anomaly. While rhythm games have always been a big hit overseas, with a plethora of arcade and console titles available besides the Dance Dance Revolution series, the United States has typically been unreceptive to the genre. This all came to a screeching halt when Guitar Hero came into the picture—a seemingly simplistic game that became a near-instant hit, changing the landscape of music gaming forever.

In the early 2000s, Activision’s release of Guitar Hero was a momentous occasion. Teaming up with RedOctane and Harmonix, the publisher worked to create what would eventually go down in history as one of the most culturally significant shifts toward a new genre the West had seen in some time. It was unlike anything gamers had ever seen before. Using a plastic guitar peripheral, players were tasked with pressing a series of multicolored buttons to imitate a guitar’s frets, strumming along as notes flew down a special “highway” in the middle of the screen. The result? Feeling like you were a veritable star guitarist.

Guitar Hero was actually based on an earlier Japanese music game called Guitar Freaks, developed and published by Konami, which had plenty of experience pushing the rhythm game genre to Japanese audiences. Harmonix was no stranger to the music genre either, releasing titles like Frequency, Amplitude, and Karaoke Revolution ahead of Guitar Hero’s glowing debut.

The original Guitar Hero debuted in 2005. It included a diminutive Gibson SG, as well as covers of 30 classic rock songs, from Incubus to Ozzy Osbourne, covering five decades to delight players of all ages. It immediately took the world by storm, becoming the second highest-selling PlayStation 2 title in February 2006 and selling around $45 million in units in just 2005 alone. After the unexpected success of the first Guitar Hero game, it was time to branch off and create sequels and spin-offs.

Harmonix went on to develop Rock Band after its partner on Guitar Hero, RedOctane, was acquired by Activision. Instead, Harmonix worked on the Rock Band project with MTV Games. Rock Band opted for a more realistic, whole-band set from the beginning, with drums, guitar, bass, vocals, and even keyboards; Guitar Hero grew into this configuration over time. Rock Band saw four entire installments as well, allowing users to simulate the feeling of being a multi-piece band before Guitar Hero accomplished the same thing with Guitar Hero: World Tour.

While the two series were meant to be competing forces, most folks who bought into one ended up grabbing the other, too. Both made excellent party games and were the best way to feel as if you were actually living your music dreams on the cheap. After all, guitar lessons were pretty pricey back then—and still are.

Unfortunately, it wasn’t meant to last. By 2009 Activision had saturated the market with Guitar Hero after Guitar Hero, none of them particularly innovative, charging full or near-full retail price for titles that amounted to little more than expansion packs. Rock Band did a bit better, keeping their releases to a minimum and offering content as DLC, but they too failed to expand features from title to title. There was a bit of franchise fatigue from consumers, but the series remained profitable for a long while. Eventually, figures declined and both EA and Activision decided to pull the plug on their respective series.

After the release of Guitar Hero: Warriors of Rock on September 28, 2010, and Rock Band 3 on October 26 of the same year, further development of the two series ceased until Guitar Hero Live and Rock Band 4 appeared in 2015. Guitar Hero Live shuttered only a couple of years after debuting. Luckily, Rock Band 4 is still seeing updates and periodic track releases, though it’s hardly the massively popular party game it once was.

While the music game genre has found success as of late on virtual reality platforms such as the Oculus Rift (with titles like Beat Saber and Audica), it’s lost most of the shine that it had nearly 20 years ago. Luckily, a trip down memory lane for would-be rockstars is as easy as picking up a plastic instrument and strumming along to a disc’s worth of tracks. Music is timeless, after all. It’s just a shame the market for music games couldn’t be. At least we still have the memories.