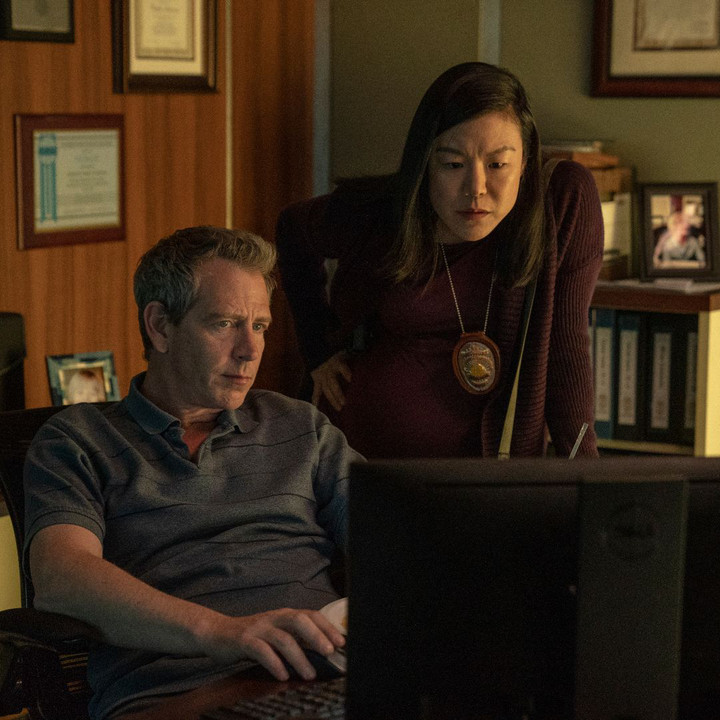 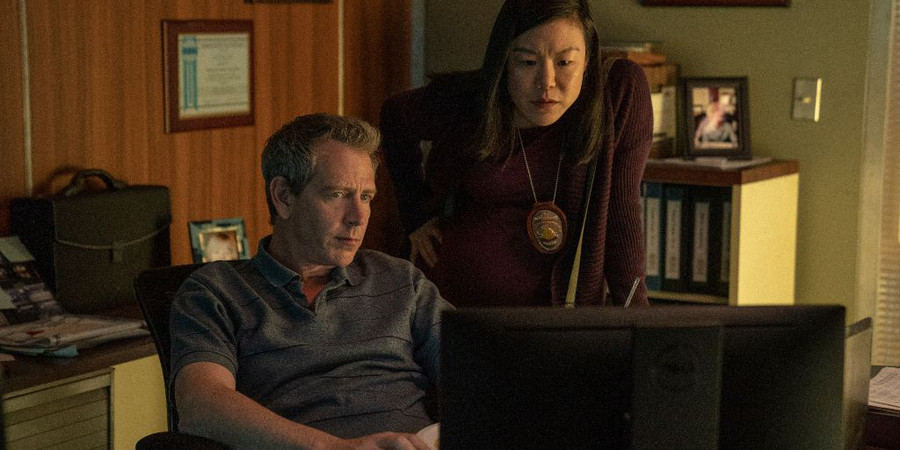 The Outsider is HBO‘s newest drama series. It debuted Sunday, Jan. 12, with back-to-back episodes, and will run single episodes on subsequent Sunday nights until March 8. The Outsider is based on the 2018 Stephen King novel of the same name and stars Ben Mendelsohn, Cynthia Erivo, and Jason Bateman in the leading roles.

Here’s what you need to know to dive into this terrifying world where a horrific crime tears a town apart.

The Outsider novel was released in May 2018 and was optioned as a series by the end of the year. It tells a story that could happen in Anytown, USA — a small town is torn apart when a young boy is horrifically murdered and a beloved figure in the community is accused of the crime, with damning evidence to back up the accusation. But the dark tale is set against a backdrop of King’s signature creepiness and supernatural happenings, making the plot a bit different from the average crime drama.

The reviews of the novel were largely positive, with The A.V. Club’s Ryan Vlastelica writing, “What’s remarkable and deeply pleasurable about the book is the way King slowly builds this world out. He may be tilling genre ground that’s similar to early blockbusters like Pet Sematary and It, but he’s doing so with the patience and maturity that’s marked the elder statesman stage of his career. He doesn’t tell a scary story so much as arrive at one; he takes the time to consider the rippling effects of violence on victims.”

The Washington Post’s Karin Slaughter, she herself a prolific crime fiction author, says of The Outsider, “No book is perfect, but Stephen King is reliably closer than most. He has always excelled at writing about real people tested by unreal situations … He knows how to throttle the pleasing purr of a fine-tuned story into a shocking, stomach-clenching thrill ride. Every downshift is artfully timed so you don’t realize you’re heading into another tight corner.”

Adapting a Stephen King novel is always a tricky job because King’s novels tend to be fairly long. But the advantage of getting to turn one of his novels into a TV series is that The Outsider creators have the luxury of 10 episodes with which to tell the story. The job of writing those 10 episodes fell to Richard Price, a screenwriter known for The Wire and The Night Of, among other works — and King himself says that Price is a great choice to adapt his work.

“As somebody who’s been adapted, the best thing I can do is say, ‘My hands are off this and I’m your fan,'” King says in a behind-the-scenes featurette, adding, “When they brought Richard Price on board, I felt like I was in high cotton. … I read the scripts as they came in from Richard and I saw things in there where I said to myself, ‘He knows more about investigatory technique than I do.’ I didn’t read the scripts as somebody who was being adapted, I read them as a fan.”

Price says a police procedural is his “meat and potatoes,” so he enjoyed writing that aspect of The Outsider, but he also loves that it begins to veer into the supernatural.

“Stephen King never abandons the police procedural thing, but the procedural means nothing without this struggle between faith and reason,” says Price, adding, “I’ve always had an affinity for supernatural literature, so when the story started shifting into something phantasmagorical, that appealed to me. I finally get to write my horror story and at the same time, based on stuff I’m very confident about. For me, it was like a double-decker of happiness.”

Ben Mendelsohn stars as Det. Ralph Anderson, the investigator who arrests little league coach Terry Maitland for a young boy’s brutal murder. Jason Bateman stars as Maitland and for much of the first part of the story, The Outsider is about the struggle between these two men where conflicting evidence makes Maitland look both innocent and guilty of the crime. As Price says in the adaptation featurette, it’s a struggle between “faith and reason.”

King adds, “What always interests me in stories like this is how does a person cope with a situation that doesn’t seem to have any rational solution in the world?”

Bateman not only appears in the show, but he also directs the series’ first two episodes. He says what really excited him about this project is “creating mood and dread, as opposed to horror.”

Enter Holly Gibney, played by Cynthia Erivo, a fan-favorite character from King’s Mr. Mercedes trilogy. She is a private investigator who has really come into her own after the events of the third Mr. Mercedes novel. She and Ralph embark on a journey to reconcile this conflicting evidence and find themselves facing down a monster that could only come from the mind of Stephen King.

What the Critics Are Saying

Reviews have so far been largely positive, praising the world-building and the slow burn that forces viewers to languish in the tragedy before stepping on the throttle as the action turns supernatural in nature. Many of them also tout how absolutely terrifying the show is.

“The Outsider is a masterclass on how to do the slow-burn right. It never drags but most certainly milks its moments for all they’re worth,” writes Deadbeat Critics’ Merrill Barr, adding, “While the series takes its time and often spends far longer with a moment that some others would, it never feels like it’s dragging. The show does such a masterful job of keeping the audience in the uncertainty and anguish it’s going for that one can’t help but be mesmerized by what’s taking place. It’s quite simply one of the best King related things to be released in a good minute.”

SlashFilm’s Chris Evangelista calls The Outsider “the ultimate tale of otherworldly nightmares creeping into our existence” and “a series of twists and turns that will leave audiences shocked, surprised, and scared.”

He adds, “Price deftly takes King’s prose and works it into a living nightmare – yes, there are supernatural doings afoot here, but they never seem out-of-this-world. The grounded atmosphere of the show makes everything extra real, and therefore extra creepy.”

As King himself says, “Put a seatbelt on your chair and get ready for a scary-as-hell adaptation of the book.” The Outsider airs Sundays at 9 p.m. ET/PT on HBO.