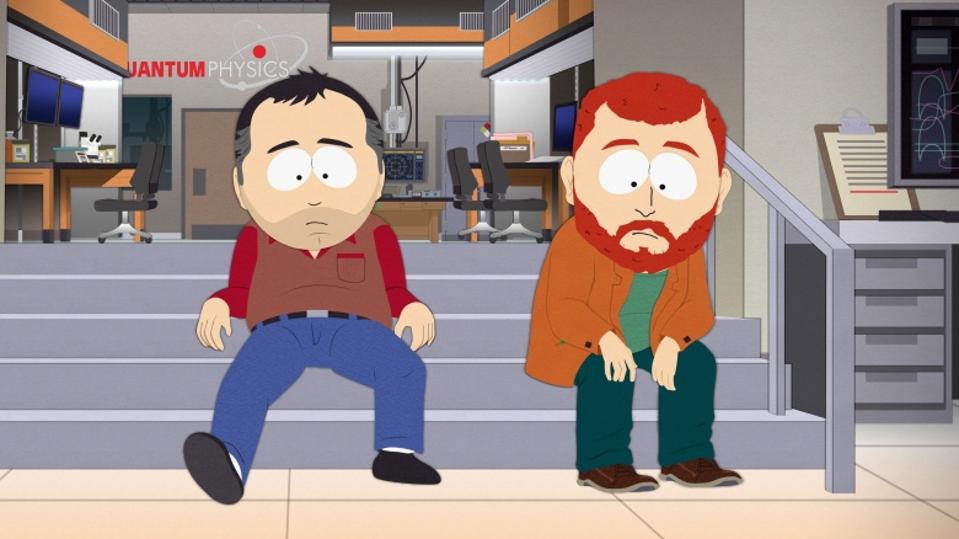 South Park imagines a future where the pandemic ends, until it doesn’t.

South Park: Post COVID marks the first of two South Park movies this year for Paramount+, with twelve more to come, along with six more seasons of the show. That’s a lot of South Park, but Post COVID proves a surprisingly compelling story.

The opening sequence celebrates the end of the coronavirus pandemic, with rapturous crowds tossing their masks and gleefully destroying Zoom’s headquarters. But the pandemic is revealed to have lasted for several decades; the boys are now middle-aged men, crushed by the weight of the world, living a dreary, isolated existence, working out of their apartments, far away from the town of South Park.

Learning of the death of Kenny (played with gravitas, one of his deaths that actually matter) brings them back together to the hollowed-out ruins of their hometown, a patchwork of decaying franchises and crumbling houses, where it is immediately announced that Kenny was killed by a new coronavirus variant, meaning that the pandemic still isn’t over.

It’s a relatable introduction, to say the least, an acknowledgment of the deep, dreary pandemic fatigue that has prematurely aged us all, transforming us into insufferable culture warriors who bicker endlessly over safety measures.

South Park creators Trey Parker and Matt Stone have envisioned a dystopian future inspired by a feverish blend of Blade Runner and cringy Babylon Bee headlines, where meat has been forcibly replaced by bug protein, punchlines have been eradicated by wokeness, and criminals walk the streets unchallenged, the police having been pushed away.

Post COVID paints a very reactionary picture, even for South Park, although it takes a swing or two in the other direction by mercilessly mocking anti-vaxxers; largely, it’s a conservative’s nightmare of the future (or rather, present).

Some of it is tedious, some of it is genuinely funny, but most of it is engaging in the activity that it criticizes the most – virtue signalling. The character of Jimmy, who has grown up to become a toothless late night host, imbues the notion that comedy is now defined more by cultural signifying than humor. And Post COVID’s repeated condemnation of wokeness is its own form of virtue signalling, just aimed at a different crowd.

The creators seem aware of this, to some degree – the final scene sees the boys lamenting how the pandemic has reduced them to repetitive, uncompromising culture warriors, weary of flying their respective flags.

Indeed, Post COVID is imbued with a deep, aching longing to return to the old status quo, a yearning that reaches far beyond the coronavirus. But the story of this made-for-tv-movie is genuinely intriguing, with some great jokes rooted in character dynamics, putting a new spin on well-worn tropes.

Familiar faces return, burnt-out by endless quarantine, economic decline and general malaise; a surprising exception is Eric Cartman, who has acquired a loving wife and family, along with a deep, dramatic devotion to Judaism.

Kyle, of course, remembers his “friend” only as a corrosive, hateful anti-Semite, and can’t bring himself to believe that Cartman has changed, especially given Cartman’s outrageously performative demonstrations of Jewish faith; it looks like one of his twisted mind games.

Cartman’s prolonged, psychotic bits were always the most memorable of his stories; hence, the viewer, along with Kyle, is kept waiting for the big reveal, the inevitable unveiling of the long con, for Lucy to pull away the football just as Charlie Brown kicks. It has happened so many times, and yet, could play out both ways in the upcoming sequel; years of torment might well have turned Kyle into a paranoid mess, unable to recognize earnestness, or Cartman could still be the obsessive lunatic he used to be, dedicating his entire life to a unhinged punchline.

Either way, it’s going to play out as Cartman acting as a foil to Stan and Kyle in this story, who want to go back and change the past, to fix the future. The question is, is Cartman trying to stop them because he has finally found fulfillment? Or … not?

These days, Cartman rarely plays the role of the hyper-selfish id, the all-consuming vortex that pulls the hapless inhabitants of South Park along for the ride in absurd ponzi schemes and destructive ego trips. Recently, that role has been played by Randy, and it’s very much on display here; the unwavering commitment to an unfunny weed joke, the malignant narcissism, the inability to admit fault – that’s what Cartman used to be.

The fact that we’re still unsure if Cartman is tricking Kyle is kind of impressive; that punchline has been done to death, and it’s still a livewire.

Post COVID is, essentially, a lengthy rant against the pandemic, one we’ve all heard and felt before, but it’s also an intriguing spin on a tired format. South Park intentionally reflects an era saturated with reboots and sequels, featuring formerly fresh-faced characters returning wearily to our screens, grey and tired.

Like The Simpsons, however, South Park never stopped airing, and hence, was never subjected to a nostalgia reboot; it just keeps trudging on, becoming increasingly curmudgeonly and self-referential.

Unlike The Simpsons, however, South Park still has the capacity to surprise.

This article was written by Dani Di Placido from Forbes and was legally licensed through the Industry Dive publisher network. Please direct all licensing questions to legal@industrydive.com.