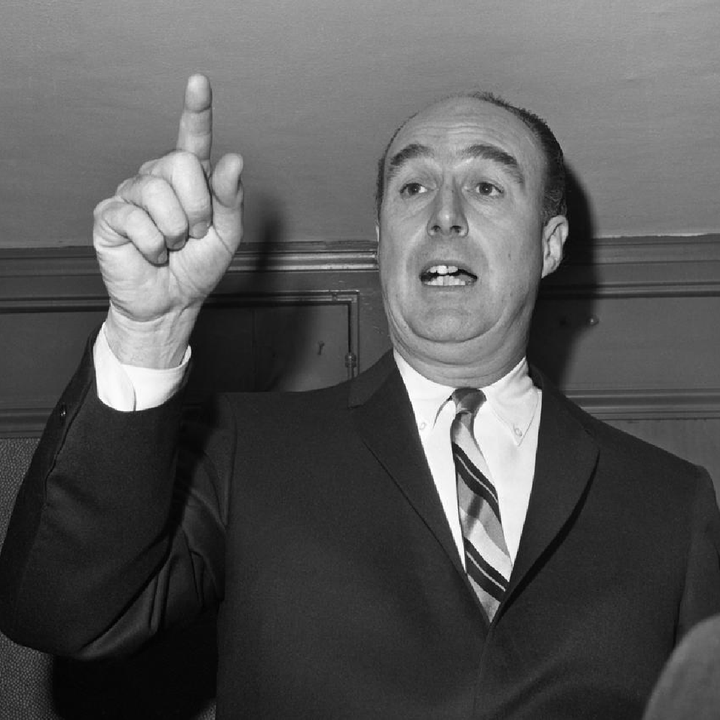 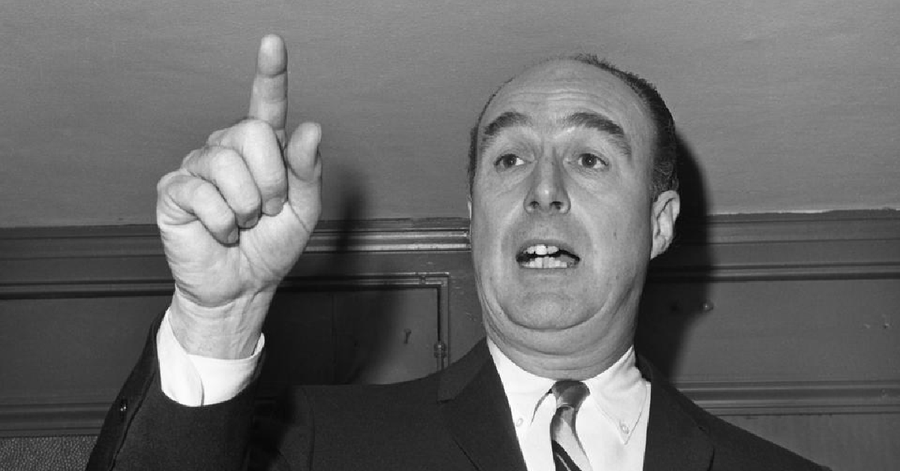 NBA Boycott Is Unprecedented; But One Almost Happened In 1964, And One Did Happen In 1961 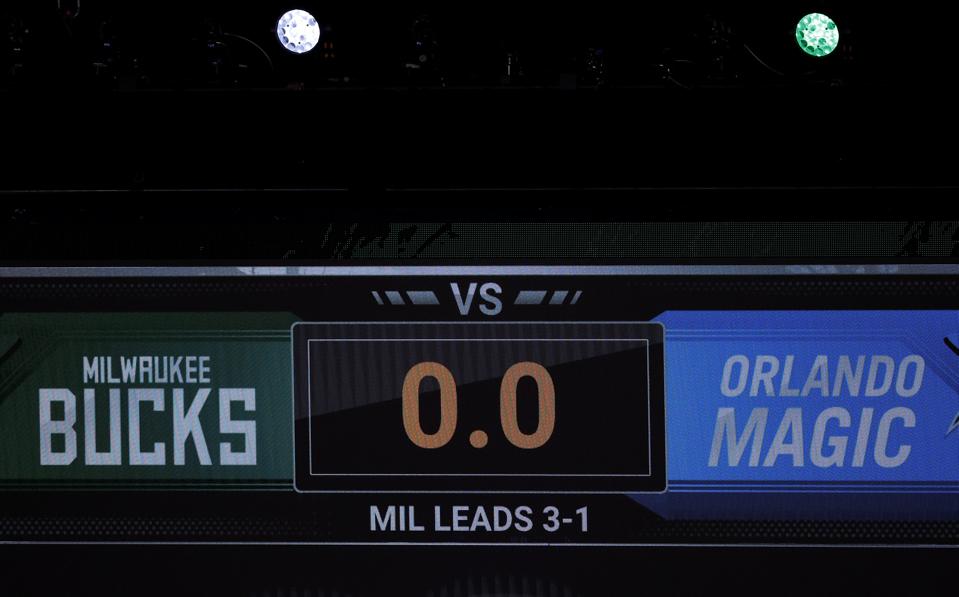 LAKE BUENA VISTA, FLORIDA – AUGUST 26: The game clock sits at 0.0 after the scheduled start time of Game Five of the Eastern Conference First Round between the Milwaukee Bucks and the Orlando Magic during the 2020 NBA Playoffs at AdventHealth Arena

What we witnessed yesterday in the NBA was unprecedented. What began with the Milwaukee Bucks deciding to boycott their playoff game against the Orlando Magic quickly morphed into a postponement of all three scheduled NBA playoff games Wednesday.

Today brings more uncertainty, and where this goes from here is a huge unknown. The NBA Board of Governors will meet virtually this morning to discuss the situation, and another all-hands-on-deck players meeting is expected, too, in Florida.

What is known is that there is precedent for players using a boycott to get a message across, although when it happened in 1964 it was not political and did not explicitly involve race and/or police brutality. It involved issues regarding pensions, and the players won.

Also, in 1961, Bill Russell, along with several of his Black teammates, boycotted an exhibition game in Lexington, Kentucky, during the preseason after the Celtics’ Black players were denied admission to several establishments during the road trip.

Thank you @DocRivers for your words of wisdom and keeping this at the forefront. Proud to see the men in the bubble using their voices to try to enact real change! @NBAonTNT thank you for talking from your heart and trying to educate others by giving your experiences @NBA

The issues the players are rallying against in 2020 are extraordinarily more significant, and the outrage concerns a pattern of systematic violence against people of color by law enforcement authorities that has been happening in America for centuries.

But never before have so many Americans and people around the world been able to witness these events unfold in something approximating real time. And whether the players should continue to compete in the playoffs is the question of the day after all teams except the Clippers and Lakers reportedly voted to keep playing during a Wednesday night meeting inside the bubble. 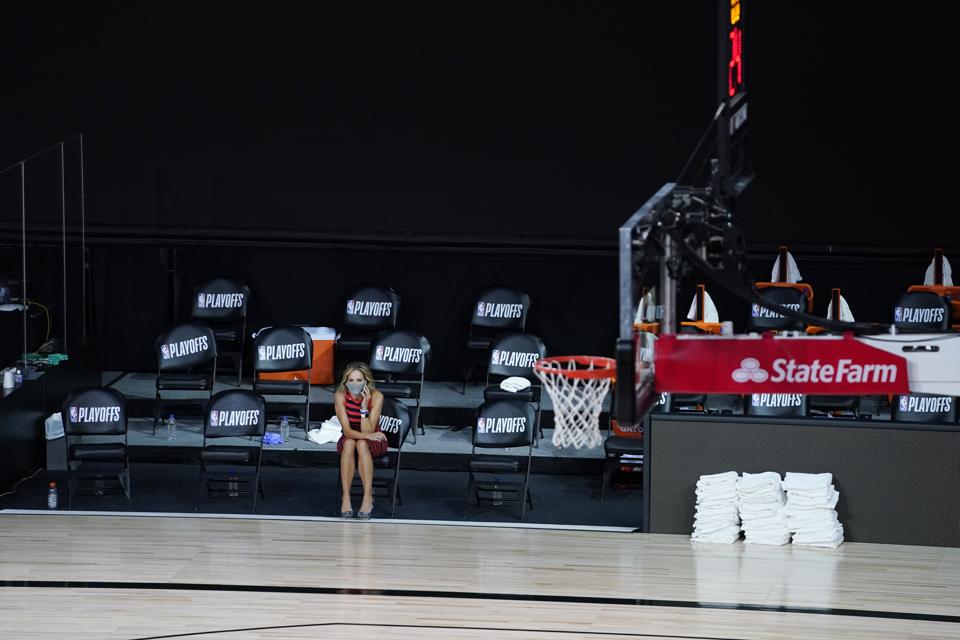 LAKE BUENA VISTA, FLORIDA – AUGUST 26: A reporter sits beside an empty court after a postponed NBA basketball first round playoff game between the Milwaukee Bucks and the Orlando Magic at AdventHealth Arena at ESPN Wide World Of Sports Complex on

So this is very, very different. And the story figures to evolve by the hour Thursday.

But that being said, a history lesson is in order because NBA boycotts have happened before.

At the 1964 NBA All-Star game in Boston, which was the first televised All-Star games in league history, the best players in the league huddled in the locker room and decided to take a stand as a blizzard raged outside.

They refused to play.

At issue was their efforts to receive pensions, not have to play Sunday afternoon games after Saturday night games, and to have trainers at every game — items they had been promised by commissioner Walter Kennedy but which they felt the league was reneging on.

Superstars of that era including Oscar Robertson, Jerry West and Elgin Baylor barricaded themselves in the locker room and refused to come out, and a standoff ensued. 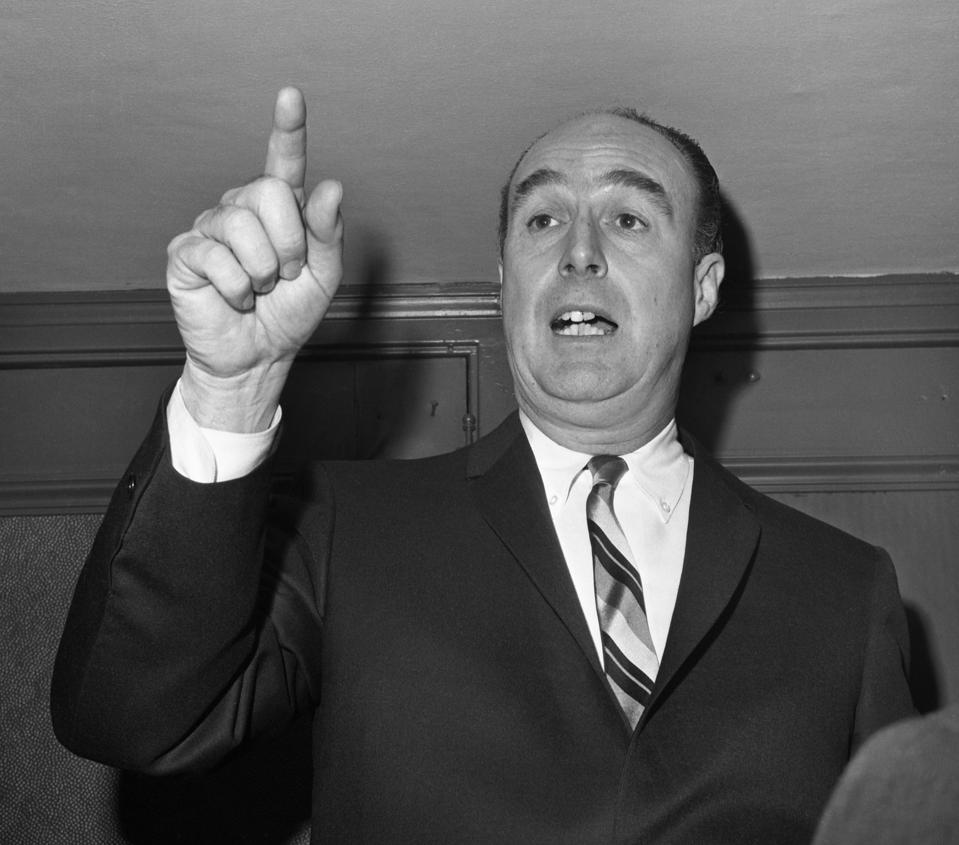 Longtime Lakers beat writer Mike Bresnahan recounted some of the details in an article for the Los Angeles Times:

Lakers owner Bob Short approached the locker room in a fury. “He said to an Irish cop that guarded the door, ‘Tell Elgin Baylor if he doesn’t get out there, he’s through,’ ” said Tommy Heinsohn, who at the times was president of the players’ association. Baylor’s response: Sorry, Bob.

Lakers star Jerry West, then 25 and in his fourth season, stood his ground with Baylor.

“I was young and just trying to feel my way along and build a career for myself,” West said. “[Short] said to us very threateningly, ‘If you don’t play in this game, you’re probably never going to play again.’ I then said, ‘I’m never going to play a game.’ I am pretty defiant.”

“The players were controlled by the owners,” West said. “All of us felt like we were slaves in the sense we had no rights. No one made anything then. You had to work in the summer. It was the stone ages of basketball.”

Shortly before tipoff, Kennedy met with the players and yielded to their demands. The All-Star game was played.

This history lesson bears repeating because it demonstrates that when players take a stand, they have the ability to win.

But what was happening in 1964 and what is currently happening in 2020 are entirely different things, and the outrage being felt by players at the latest incident of a Black man being shot by police, this time in Kenosha, Wisc., is sparking extraordinary outrage in the country at large, not just in the sports world. 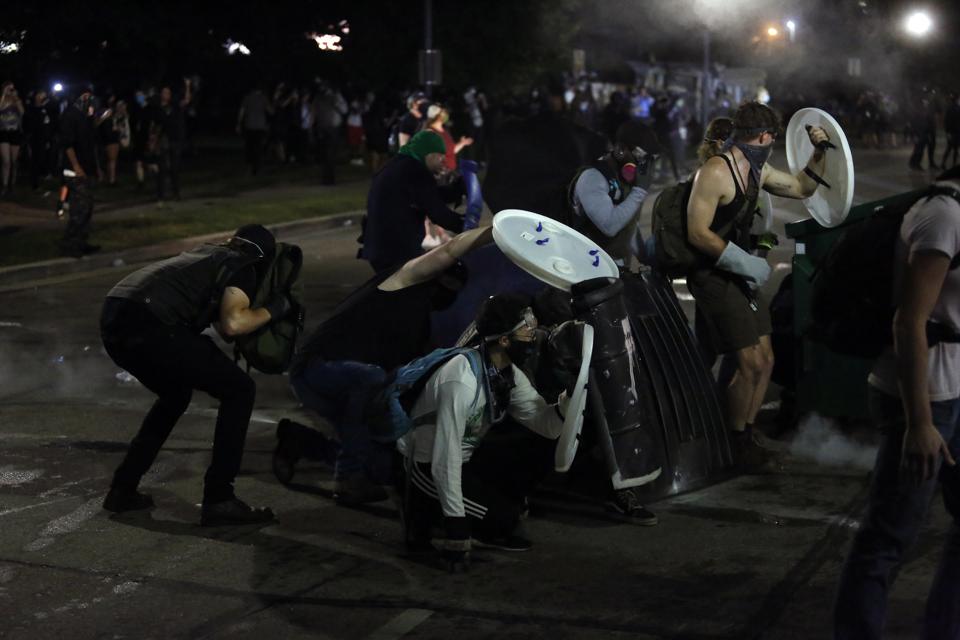 KENOSHA, WI – AUGUST 25: Demonstrators protest the police shooting of Jacob Blake outside the Kenosha County Courthouse on Tuesday, August 25, 2020 in Kenosha, Wisconsin. Blake, who was shot in the back multiple times by police officers who were

NBA players agreed to resume their season in a bubble in part because they believed their platform to push for social change could best be achieved through having their message seen and heard on every game telecast. “Black Lives Matter” is emblazoned across all the court being used at the ESPN Wide World of Sports complex in Florida, and many players are wearing slogans calling for racial justice and equality across the backs of their jerseys.

Coaches are wearing pins that say “Coaches Against Racial Inequality,” and both the players and coaches have spoken during their time with the media about issues apart from basketball.

Yet in this politically polarized country, the message they are trying to send is falling on deaf ears with a significant portion of the population.

Wednesday’s boycott raised the stakes, and how commissioner Adam Silver responds today will be a huge part of the equation in terms of whether the postseason resumes, or the NBA closes up shop for the summer.

The NBA and the NBPA today announced that in light of the Milwaukee Bucks’ decision to not take the floor today for Game 5 against the Orlando Magic, today’s three games – MIL-ORL, HOU-OKC and LAL-POR have been postponed. Game 5 of each series will be rescheduled.

And so the outrage continues, as does the violence … the latest being the police shooting in Kenosha last Sunday of Jacob Blake, which was followed by three nights of violence and the subsequent fatal shooting of two protesters , allegedly by a 17-year-old Illinois man who was arrested Wednesday.

It took four days for authorities in Wisconsin to release the name of the police officer who fired seven shots at Blake. His name is Rusten Sheskey, and he has neither been arrested nor charged with a crime. If that remains the status quo, it will not sit well with the NBA players.

Video of the Blake shooting went viral, much like what happened after the police killing of George Floyd in Minneapolis, and protests have been taking place throughout the United States. 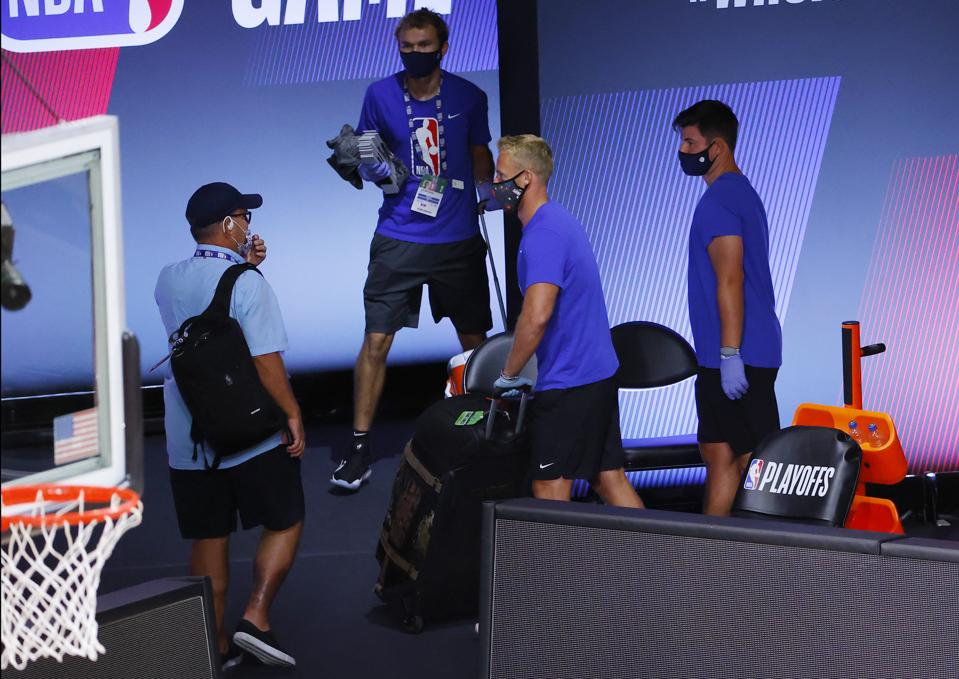 LAKE BUENA VISTA, FLORIDA – AUGUST 26: Workers remove items from the Milwaukee Bucks empty bench after the Bucks sit out Game Five of the Eastern Conference First Round in protest during the 2020 NBA Playoffs against the Orlando Magic at

Now, we have NBA players taking a stronger stand than they perhaps ever have, and where this goes next is a mystery. Basketball playoffs had been providing diversion and entertainment to the millions of Americans working from home and suffering from cabin fever because of the COVID-19 pandemic, and there is a very real possibility that it gets shut down.

The players’ anger is very, very real. And sports fans need to consider the possibility that the rest of the NBA playoffs may not happen.

FUCK THIS MAN!!!! WE DEMAND CHANGE. SICK OF IT

This article was written by Chris Sheridan from Forbes and was legally licensed through the Industry Dive publisher network. Please direct all licensing questions to legal@industrydive.com.