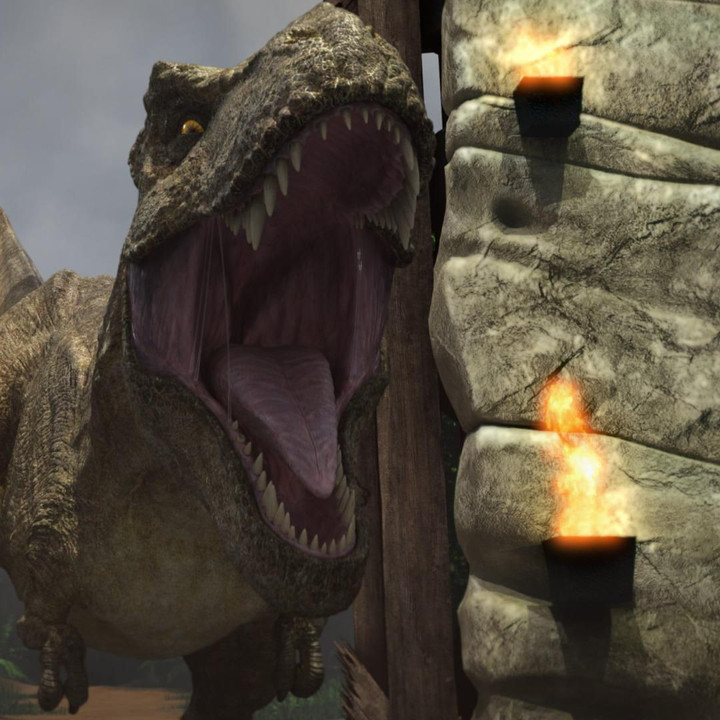 ‘Jurassic World: Camp Cretaceous’ Is A Netflix Hit And A Worthy Companion To ‘Jurassic Park’ 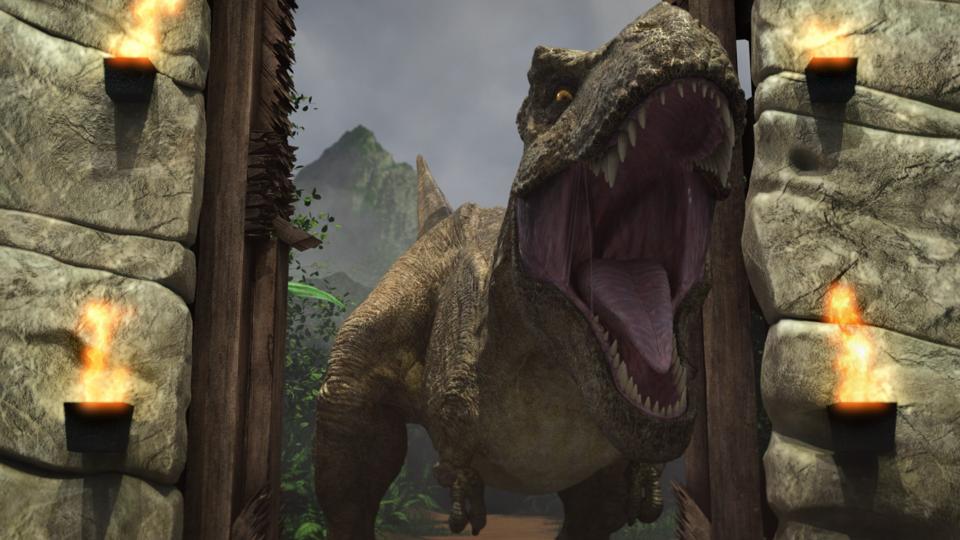 In a skewed way, the first two major Netflix NFLX animated spin-offs from Universal’s two biggest franchises are doing a better job of the whole “cinematic universe” thing than we saw with Solo: A Star Wars Story. That’s not a quality judgment per-se, as the Ron Howard-directed Han Solo prequel is a perfectly fine outer-space western. But Fast & Furious Spy Racers and Jurassic World Camp Cretaceous (which has been among Netflix’s most-watched shows since Friday) are basically what we were initially promised with Disney’s Star Wars movies, namely a somewhat disconnected story that happens to exist within the world of the given brand. It’s a true spin-off rather than a skewed prequel/sequel.

Unlike the HBO Max shows being planned around Matt Reeves’ The Batman (a Gotham cops show) and James Gunn’s The Suicide Squad (a John Cena-as-Peacemaker mini-series), these shows don’t take away from the special-ness of the big movies. Rogue One was a direct prequel to A New Hope and Solo was, well, a “young Han Solo” flick for a character who had already starred in four out of nine prior Star Wars movies. Conversely, these animated Netflix episodics are following the path of Dave Filoni’s Star Wars: Rebels and Jon Favreau’s The Mandalorian in terms of creating new characters within the framework of the overriding story.

The reason I’m inclined to compare them to the feature-length Star Wars Story movies (both of which are varying degrees of “good”) rather than The Clone Wars, Rebels and Resistance is that both the Fast & Furious toon and the Jurassic World toon flirt with being essentially stand-alone movies broken into eight episodic segments. Both shows are compromised of eight 24-minute episodes which, when you remove the credits and other variables, comes out to a three-hour feature. And, yes, without getting into the whole “What’s a movie and what’s a TV show?” debate, both shows are structured (and short enough) to either be consumed individually as satisfying episodes or as a single feature film/adventure. 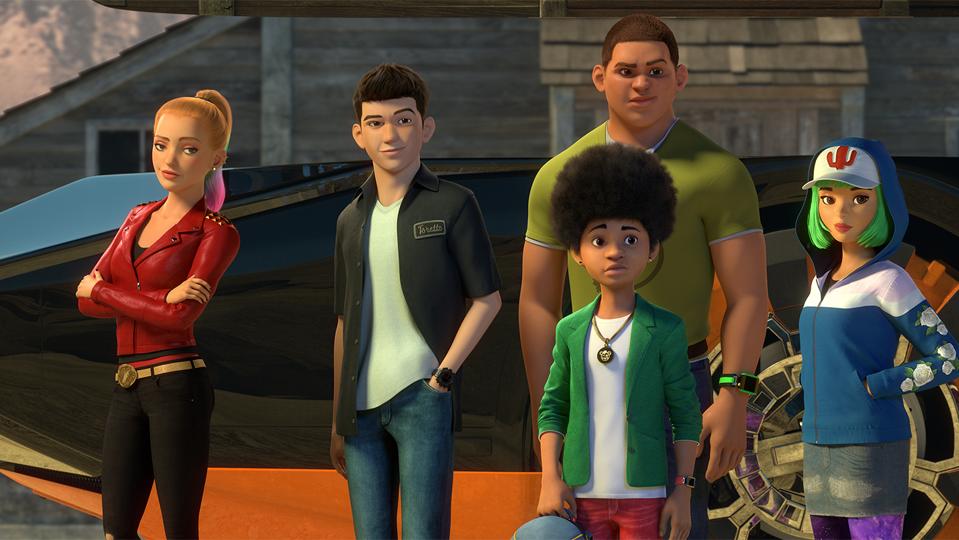 Spy Racers was a successful finagling of a violent action franchise into a kids toon in a way that feels like a plausible spin-off movie. By virtue of its PG-rated sensibilities and its comparatively small-scale adventures, it actually works as a companion piece to the first four Fast and Furious movies before it became an A+-level global blockbuster franchise on par with James Bond and the MCU. Its core plot, pitting Dom’s young nephew (Tyler Posey’s Tony Toretto) and his young friends infiltrating a group of sympathetic kid-sized street-racing baddies, plays much like the “us against the system” Point Break (of which Fast and the Furious was an unofficial remake).

Spy Racers uses its episodic format to give audiences young an old essentially a greatest hits of the franchise redone as a single adventure starring heroes and villains barely old enough to have their driver’s licenses. The episodes are colorful, well-animated and exceptionally well-structured so that each 22-minute show feels like both a full meal and part of a larger narrative. The second episode gives us a delightful underground race that will remind you of Speed Racer and Mario Kart (there’s a reason the drivers all wear parachutes) while the fourth episode is an old-school Mission: Impossible romp. Speed Racers could easily be slotted as an (offhand) “in between Fast and Furious 6 and Furious 7” spin-off movie.

Created by Zack Stentz (who wrote one of my least favorite MCU movies and my favorite X-Men movie), Jurassic World: Camp Cretaceous, concerns six kids, five coming from privilege and one (Paul-Mikél Williams’s Darius Bowman) who earned his ticket to a test run of a sleepover camp at Jurassic World. The Charlie and the Chocolate Factory… but at Jurassic World is a pretty brilliant hook, and the kids are a mix of broad types (the social media influencer, the shy book worm, the introverted athlete, the overly friendly extravert and the self-anointed alpha-male) and specific personalities. Our protagonist is the dino fanatic who had planned to visit the park with his now-recently-deceased father (Keston John) and who find himself in an unofficial leadership position when “things fall apart.” 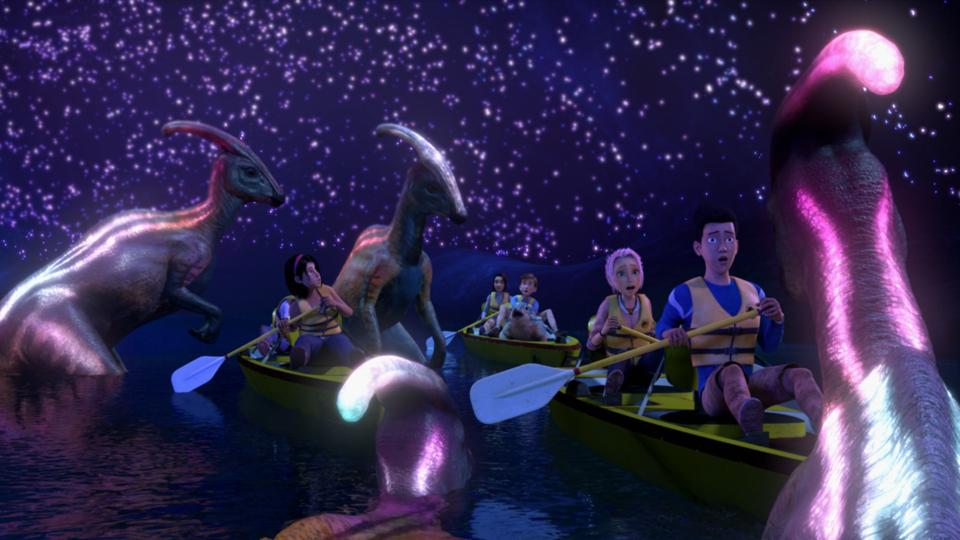 It wouldn’t be much of a show if the trip went smoothly, and we slowly find out that this trip is taking place during the events of Colin Trevorrow’s Jurassic World. We get references to the characters and events of that film, including an appearance from Dr. Henry Wu (voiced by Greg Chun), with these six kids eventually having to survive as the whole park goes to hell. To answer what may be your next question, yes there is a body count in this show. Whether any of the kids get eaten by dinos, there is some (generally offscreen and entirely bloodless) carnage and lots of scenes of the kids escaping certain death by at the very last moment.

There is plenty of dino terror and intensity, but I’d argue it pales in comparison to the violence and onscreen carnage in Filoni’s Star Wars toons. The highest compliment I can pay to the kids in this show (voiced by, respectively, Paul-Mikél Williams, Jenna Ortega, Kausar Mohammad, Sean Giambrone, Ryan Potter and Raini Rodriguez) is that when the danger strikes, you’re not rooting for the kids to become dino snacks. Yes, the kids spar with each other and get into specific conflicts and disagreements, but they all are all morally decent and generally good company. And while I rolled my eyes a little at the open-ended finale, it’s such a solid cliffhanger that I couldn’t hold a grudge.

Jurassic World: Camp Cretaceous is a mostly engrossing mini-series that doubles as an extra long “meanwhile, over in this corner” Jurassic World spin-off movie. It’s about as good as the various Jurassic sequels, although I like all of them to varying degrees. Ditto Speed Racers being as good if not better many of the Fast & Furious movies. And as “movies,” they work well as a “meanwhile, over in this corner of the universe” spin-off that doesn’t depend on the core cinematic narrative.  I don’t know if we’ll be getting other animated, kid-friendly spin-off episodics from Universal’s brand slate, but I suppose we should be waiting on Jason Bourne Jr. (which can’t be worse than James Bond Jr.). Coming soon: The Purge… For Kids?

This article was written by Scott Mendelson from Forbes and was legally licensed through the Industry Dive publisher network. Please direct all licensing questions to legal@industrydive.com.