Is AT&T’s Westworld Bernard poster depicting the host or the human? You decide.

To celebrate Westworld’s second season, AT&T and HBO are releasing a series of posters for fans, available while supplies last — and it’s only fitting that the posters depict host characters because this season has been all about their uprising.

The poster we’re highlighting today is of Bernard (Jeffrey Wright), one of the most fascinating characters on the show. When Jeffrey Wright is on screen, viewers can never be quite sure if they’re watching Bernard the host or Arnold the park creator, since Bernard was created in Arnold’s image.

Indeed, in graphic artist Berkay Dağlar’s poster, there is a rendering of Bernard with Dolores (Evan Rachel Wood) — but it might actually be Arnold. In fact, it probably is Arnold. But we can’t be sure either way. 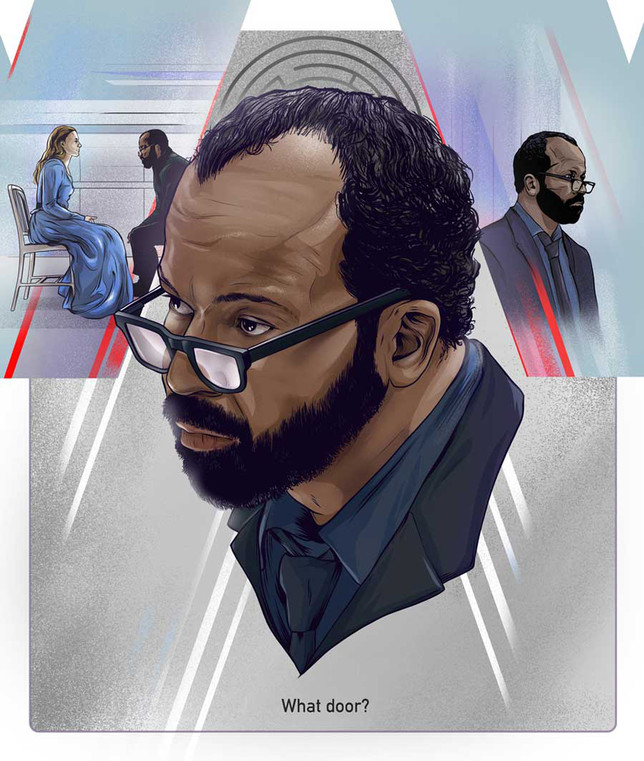 The quote highlighted on the poster is also a wonderfully cheeky choice — “What door?” — because it works on two levels.

In season one, viewers were led to believe that Bernard was a human, right up until he went with Theresa Cullen (Sidse Babett Knudsen) to a cabin in the woods and we learned otherwise. The big “gasp” moment came when Theresa found a door in the wall that led to an underground bunker… but Bernard couldn’t see the door. Westworld is full of twists and turns, and that was one of the best.

But the quote also works because the unofficial subtitle of season two is “The Door,” aka the puzzle left by Robert Ford (Anthony Hopkins) for the Man in Black (Ed Harris). And we now know (for those caught up on season two) that the underground bunker in question contains several other versions of Bernard.

While we wait for the next episode’s reveals, check out Dağlar’s display on Behance and then be sure to find your nearest AT&T retailer to pick up your favorite poster — or all seven, if you can’t decide.