Here’s Everything We Know About the White Walkers

Cersei Lannister can throw a world-class icy stare, but on Game of Thrones, nobody does bone-chilling evil like the Night King and his White Walker retinue. These undead big bads are as scary as they are mysterious. What motivates them, besides ice magic, fear of Valyrian steel, and a desire to destroy all life? The show hasn’t told us much, but here’s everything it has revealed so far about the Night King, the White Walkers, and the Army of the Dead. 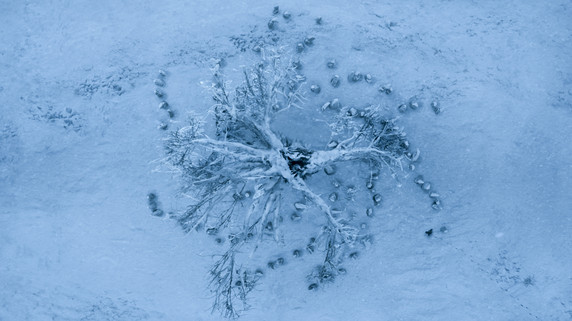 In season six, one of Bran Stark’s visions revealed the Walkers’ ironic origin story. Centuries before the events of the show, the Children of the Forest, indigenous inhabitants of Westeros, faced a crisis. The First Men, ancestors of the Westerosi we know today, brought with them bronze weaponry and a general penchant for destruction. Desperate to protect their lands, the Children created the White Walkers to fight back against the invaders. The Children sacrificed a human, stabbing him through the heart with dragonglass. But the dark ritual backfired, and the victim transformed into the first White Walker, who would become the Night King.

The White Walkers swept Westeros from the North (atop ice spiders big as hounds, if you believe Old Nan), and with them came a sunless winter that plunged the continent into cold and darkness. The Long Night lasted a generation, during which the White Walkers ravaged the land and terrorized First Men and Children alike. The common enemy forced the First Men to unite with their foes, and armed with dragonglass blades, their combined force defeated the Walkers and caused them to retreat North.

Afterward, a Stark ancestor not-so-coincidentally named Brandon the Builder enlisted the help of the Children to raise the Wall, a massive structure of magic-reinforced ice. The White Walkers were trapped forevermore north of the Wall, unable to reenter the Seven Kingdoms (at least until recent events), and eventually faded into fireside folklore alongside snarks and grumpkins.

But the Walkers survived the next few millennia, and continued to multiply by turning human babies into ice monsters just like themselves. One procurement strategy involved an agreement with Craster, a wildling lord beyond the Wall. Craster sacrificed all his newborn sons to the Walkers, and in return, they didn’t visit him with icy death.

But relying on a steady supply of wildling babies won’t build an army overnight. The Walkers’ real growth-hacking strategy is their ability to raise the dead. At the Battle of Hardhome, Jon Snow saw these powers firsthand. When the fighting was over and bodies covered the frozen ground, the Night King raised his hands—and Jon’s heart sank as every one of those bodies stood up. The reanimated corpses became wights, ready to fight steadfastly (if a bit stiffly) for their King.

This means every dead body is a potential new soldier in the Army of the Dead. And not just humans; horses, giants, polar bears, and as of season seven, the Wall-destroying artist formerly known as Viserion. Does it make sense that the Night King’s new superweapon can fly even with holes all over its leathery wings? No. Does that make it any less terrifying? Also no.

The White Walkers may seem like unthinking, unfeeling murder drones. And maybe they are. But they possess at least a hive intelligence, and generally seem to be a step ahead of the living. Think back to Thrones’ pilot episode, when they surprised and slaughtered a group of Night’s Watch deserters, or “Beyond the Wall,” when Jon Snow’s hunting party just happened to find a small pod of wights in a valley tailor-made for an undead ambush.

Only one person can (probably) stop them…

The red priestess Melisandre frequently alludes to a prophecy: the Prince Who Was Promised, Azor Ahai reborn, who will use his flaming sword Lightbringer to liberate humanity from the forces of evil. (Azor Ahai was a mythical hero who brought light to the land after an age of darkness, which many suspect to have been the Long Night.) At first, Melisandre mistakenly believed the late Stannis Baratheon would fulfill the prophecy. But now she’s all aboard the Jon Snow train.

Of course, there’s nothing in the Red God’s rulebook that says Azor Ahai must be reborn as a man. So the Prince Who Was Promised could actually be a Princess…or a Queen.

And don’t forget about Bran. With his ability to see across time and space—and the psychic connection he seems to have formed with the Night King—the new Three-Eyed Raven looks to play a pivotal role in the wars to come.

…but they do have weaknesses 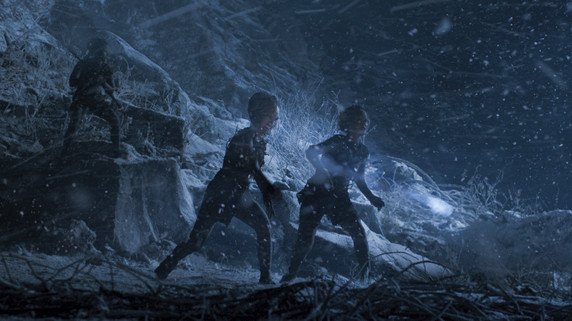 If the prophecy of Azor Ahai doesn’t come to pass, there are a few more things that could end the Night King’s reign. We know the volcanic rock dragonglass (the maesters call it obsidian) definitely kills White Walkers. At Hardhome, Jon Snow took out a Walker with Longclaw, his Valyrian steel sword—and the Night King definitely noticed. There are a few other Valyrian steel weapons floating around: Arya’s dagger, Sam’s family sword Heartsbane, Brienne’s Oathkeeper, and Widow’s Wail, currently in the possession of Jaime Lannister.

Plain old fire can’t hurt the Walkers (although it does take care of their wights). Perhaps a dragon’s fire would be hot enough. You know Daenerys, Drogon, and Rhaegal will be burning for revenge after Viserion’s death. It remains to be seen whether any of the above can deal with the Night King himself, but if the season eight trailer is any indication, the living will find out soon enough.

The Great War is upon us at last. Will it mark the end of the White Walkers, humanity, or both? Get HBO from DIRECTV and tune in to Game of Thrones to find out.