After seven seasons of Game of Thrones, you might think you can tune out during the opening credits.

A show that never fails to surprise gave us a new reason to get hyped with the introduction of an all-new opening credits sequence in the Season 8 premiere, “Winterfell.”

We see right away that the flurry of snow over King’s Landing at the end of last season was no lie: Winter Is Here. We begin north of the magical structure formerly known as The Wall, as the snow blanketing the North transforms into straight-up ice. For the first time, we’re headed straight down the Kingsroad, north to south. Blink and you’ll miss a flyover of Last Hearth, the seat of House Umber, which proves to be the first stop on the Night King’s comeback tour of Westeros.

Normally, the intro hovers over several different locations. But with all the characters basically in two places (Winterfell and King’s Landing), the opening credits delve deeper into familiar locations. The first half of the credit sequence has a decidedly monochromatic palette, with the odd hint of red, perhaps reflecting the sigils of Jon Snow and Daenerys Targaryen.

The camera zooms through several Winterfell locations: the great heart tree in the godswood, then the great hall, then down into the crypts. We didn’t know it at the time, but this would offer a clue as to where the episode’s action would take place. First, Arya and Jon reunite in front of the weirwood. Then the assembled Northern lords convene in the great hall to give Jon a piece of their mind. Finally, Samwell Tarly drops some genealogy on Jon in front of the statues of Ned and Lyanna Stark. Does this mean subsequent episodes will follow this same convention?

Next, it’s south to King’s Landing, where we sweep over the streets (Flea Bottom? Gin Alley?) before witnessing the construction of the Red Keep (no doubt following Maegor the Cruel’s original blueprints) and an incredibly cool flight through its catacombs, complete with snapping dragon skull. Notably, the house sigils are missing from all the locations we see—as Bran might say, we don’t have time for this—but we finish out in the throne room, newly redecorated with Lannister stained glass.

Even the carvings on the astrolabe (that’s the spinning thing with gold bands that we saw at the Citadel in previous seasons) are different. The first one shows undead Viserion bringing down the Wall (why did they have to remind us?):

Another band features a scene of the Red Wedding (again, why did they have to remind us?), with what appears to be the Twins, a Lannister lion, and a strung-up Robb Stark. 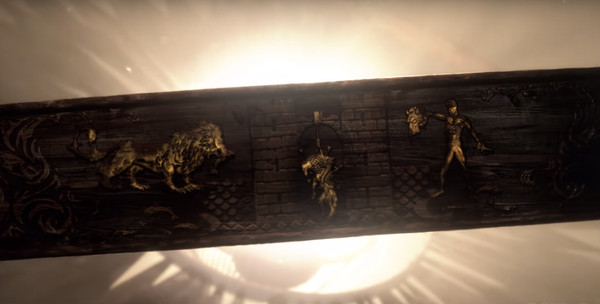 Finally, a dragons plus what appears to be a comet hurtling through the sky. Season 2 featured a red comet prominently, but never really alongside dragons, let alone four of them. Is this a scene from the past, the future, or…just some cool art?

Previous carvings depicted historical or legendary events. If these new images are any indication, Season 8 promises to rewrite the Citadel’s history books.

Tune into the opening credits and more as Game of Thrones races to its epic conclusion, Sunday nights at 9 on HBO via DIRECTV.