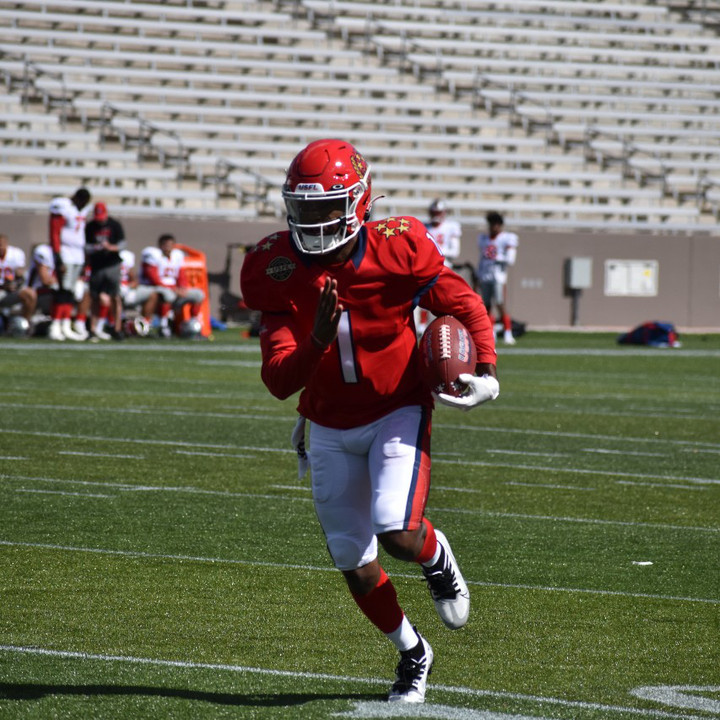 Broadcast networks Fox and NBC kicked off the opening season of the United States Football League with a rare simulcast of the league’s inaugural game, as the USFL looks to succeed where other spring football leagues have failed.

The eight-team, Fox Sports-operated league will play a 10-game regular season — with all games played at Protective Stadium in Birmingham — and a three-game postseason that will determine the league’s champion.

Fox Sports and NBC Sports will televise every game via the Fox and NBC broadcast channels, USA Network and FS1 cable channels, and the Peacock streaming service.

Mike Mulvihill, Fox Sports executive vice president and head of strategy and analytics, spoke to Multichannel News senior content producer R. Thomas Umstead about Fox’s operational and programming strategy for the league, as well as how USFL games will differ from the NFL on the field of play. An edited version of the interview appears below.

Need more narrative to keep your head in the game? Keep up with the biggest off-season football stories.

Multichannel News: Why is Fox Sports confident that there is viewer demand for pro football in the spring?

Mike Mulvihill: I think the foremost thing that gives me confidence is that the appetite for spring football has already been pretty well demonstrated. The numbers that we saw in 2020 for the [WWE-owned] XFL were really encouraging. Had the pandemic not turned our world upside down and forced the XFL to suspend operations we would probably be in our third season of XFL football right now. The numbers that they were doing were more than satisfactory — they were doing a little under 2 million viewers for their games on national networks. That’s a pretty good number in the current environment. I think that gives us a good baseline expectation for what we can do.

MCN: How is Fox looking to market and promote the USFL in a very crowded and noisy sports television marketplace?

MM: I think we can come at that in a couple of ways. One is that we’re very fortunate to have not just our own networks, but to have an incredible partner in NBC Sports. To have a scenario where we’re able to leverage our own air time and our own promotional vehicles, and also rely on NBC for their own promotional power and production expertise is a really advantageous situation. There have been very few startups that have launched with the full support and the full power of not just one but two major traditional media companies. Hand in hand with that we’ve developed a schedule that has something like two-thirds of our games on free, over-the-air television networks at a time where a lot of sports content is going to streaming networks. For the viewer right now it’s a little bit tricky to find the content that they’re looking for — they don’t know what streaming platform to go to or what games are on what cable channels. When you have a lot of games on Fox broadcast or on NBC broadcast – the same networks that they go to to watch the NFL every Sunday – that’s a huge advantage.

MCN: From an operational standpoint, does Fox’s control of the USFL increase the prospects for the league’s long-term success?

MM: You raise a great subject, because when people examine the opportunity for success in a spring football league, what they tend to focus on is consumer demand and whether we can  generate an audience. But I think just as important is how we manage costs and how we keep those costs from getting out of control, which I think has been a big issue for previous spring leagues. We feel really confident that the consumer demand is there. Where we think we have a great business advantage is in the fact that we are an owner of the league, and we are able to use the vast resources of a company of this size to help manage the operations of the USFL.

MCN: How will the USFL differ on the field from the NFL?

MM: I would tell you that probably 95 % of the USFL rule book is identical to the NFL rule book, because we don’t feel a need to reinvent the game. When people tune in, we want this product to be instantly recognizable as professional football – we don’t want it to be excessively gimmicky. Where things get a little bit different is after a scoring play, we’ve got some innovations that we think are going to help keep games close. One of them is that a team can elect to either kick an extra point or try for a two-point conversion. We’re actually going to introduce a three-point conversion as well, because when you have a three-point conversion in play that means that a game with a margin that’s as much as 18 points is still a two-possession game. We think that’s going to keep fans interested. We’ve got a mechanism in place where rather than attempt an onside kick, we’re going to let a team bring their offense on the field and try to convert a fourth and 12 [play] from scrimmage. The play clock will go from a 40-second clock to a 35-second clock – it’s a subtle distinction, but again it should just result in more offensive plays per game.

Still have NFL on the mind? Check out the details on the 2022 NFL Draft.

This article was written by R. Thomas Umstead from Next TV and was legally licensed through the Industry Dive Content Marketplace. Please direct all licensing questions to legal@industrydive.com.