Fight Week in the City of Angels: Part Two – Garcia vs. Easter

For a fighter, the grueling hours spent honing the body, refining the skills, dropping the pounds, is often a solitary burden borne only by the fighter himself, despite the presence of trainers and managers. They, after all, aren’t doing the work alongside their fighter, only exhorting the boxer to expend every ounce of available energy to perfect the man that will enter the ring come fight night.

Media work is a different story. It is in some sense a respite from the demands of the gym. No one is shouting at you. No one is throwing punches at you. No one is demanding another round of sparring or another session of skipping rope. Instead, the scene shifts: from the dusky light of an austere gym to the carpeted confines of an air-conditioned five-star hotel. The cast of characters changes: instead of gloved headhunters in sparring gear, there are media men and women in business suits and skirts. The tone of voice shifts: from the impatient shouts of trainers and the straining sighs of the workout, one now encounters the smooth-spoken MC and the laudatory odes of promoters, who regale the crowd with tales of each boxer’s historic successes. The spotlight soon descends on the man of the moment, and the questions often begin with eulogies and end with well wishes.

For fighters of a certain pedigree, this, too, is an indispensable chapter in their journey to fight night. For WBC Lightweight Champion Mikey Garcia (38-0, 30 KOs) it is old hat, a process he has graciously endured many times on his way to championships in four divisions. For IBF Lightweight Champion Robert Easter, Jr. (21-0, 14 KOs), the process is relatively new, his shy replies evidence of the novelty of the moment for the 27-year old Toledo native. But both fighters gamely answer the same questions again and again, attempting to make their answers sound fresh, though they’ve repeated themselves a hundred times. From the green room to the brightly lit stage, all of Saturday’s main card fighters trudge through the media routine, explaining why they will defeat each other, before standing face to face for the cameras. Neither fighter wants to blink first. None want to be the first to look away. All want to look hardened to the task, muscles firm and faces rigged to hide the slightest trace of fear or uncertainty. It is a chance perhaps to gain the smallest of advantages in the psychological battle that takes place between the boxers, a wordless exchange composed of sharp glances and strong stances. Even among such decent and well-mannered men as these, a few phrases of belittlement may find their way into the headlines. He hasn’t fought anybody. He got lucky against… Such asides serve as motivating challenges, verbal signs of disrespect that must finally be answered with fists rather than words.

Today the fighters on Saturday’s main card convene at LA Live for a slew of interviews and to face the assembled media in the final press conference before fight night. The media spotlight only intensifies as the big event nears. Still, all the fighters show composure and calm as they patiently field the questions and deliver the patented answers to media crews looking for a good quote or even just filler to occupy column inches the next day. 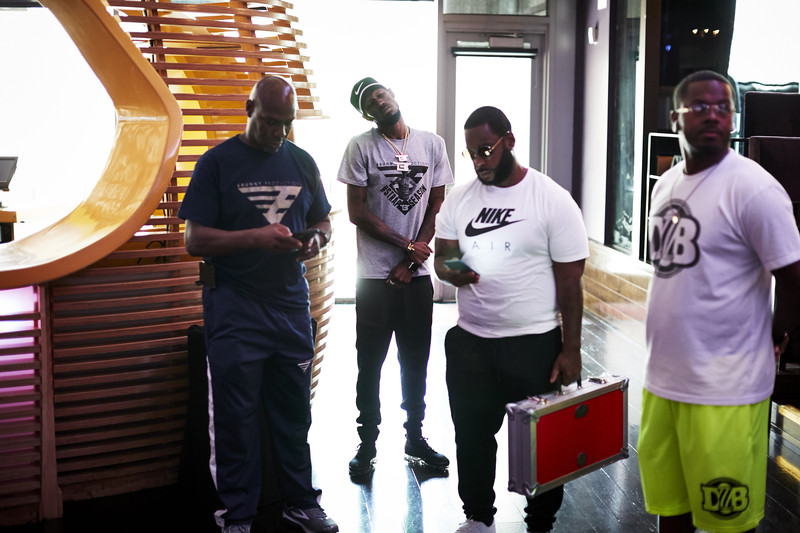 Above, Robert Easter, Jr., performs a neck roll as he prepares for media interviews. He is surrounded by his team, who never move far from their champion’s shadow. They are a quiet presence during each interview, critiquing the questions being asked of their fighter, nodding in agreement at his replies. 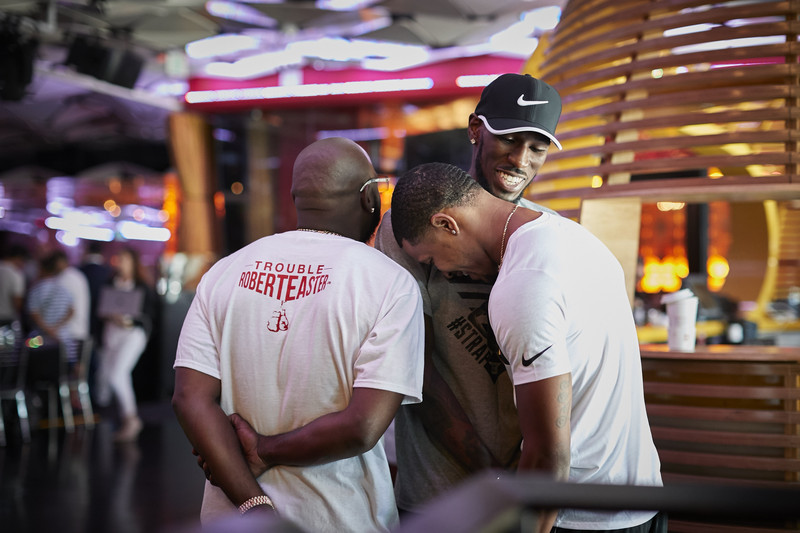 Above, Easter enjoys a light moment with his team, inside jokes that the media are not privy to. 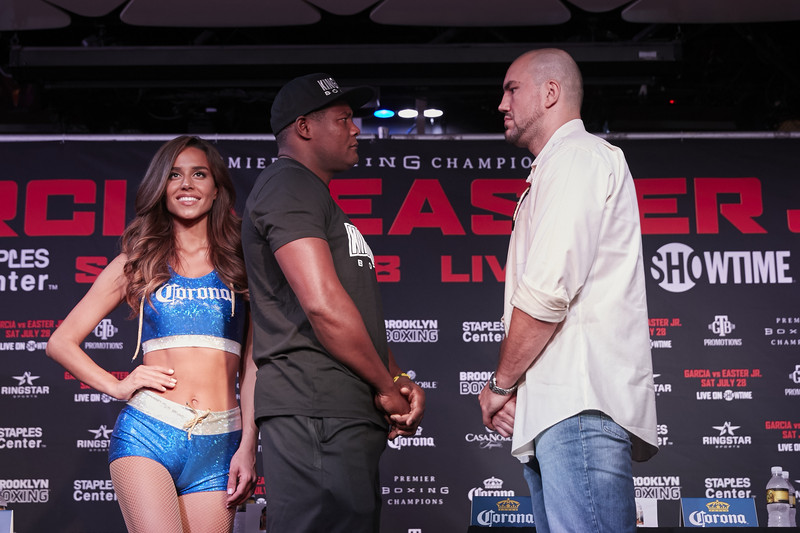 Heavyweights Luis Ortiz and Răzvan Cojanu face off at the final press conference before Saturday’s main event. Despite each fighter’s relative calm, there is a quiet menace in their gaze. There is a reason fans gravitate to the heavyweights. As former champion Bob Fitzsimmons said of the top division, “The bigger they are, the harder they fall.” Is it this promise of colossal collapse that so intrigues fight fans? 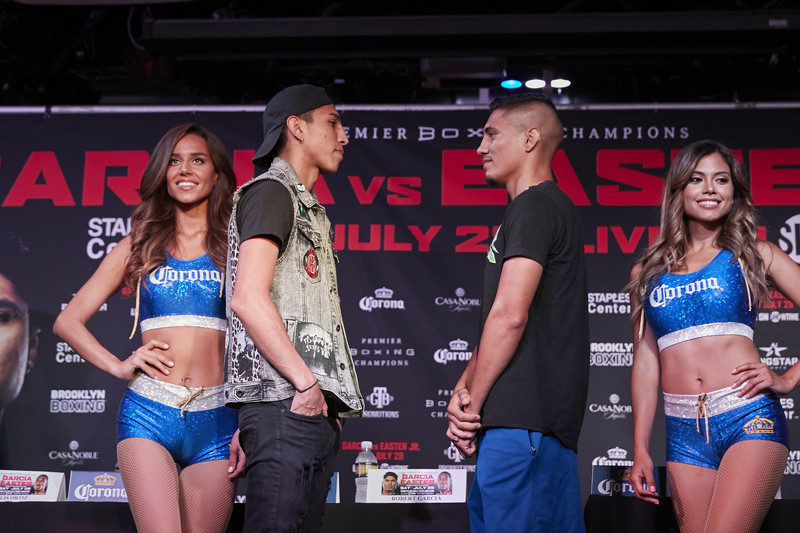 In stark contrast to the almost humorless heavyweight face off, young prospect Mario Barrios and veteran Jose Roman seem like skater kids by comparison. Their easy gazes and youthful wardrobes belie their strength and expertise. The two will tangle in a highly anticipated junior welterweight bout on the Garcia vs. Easter undercard. 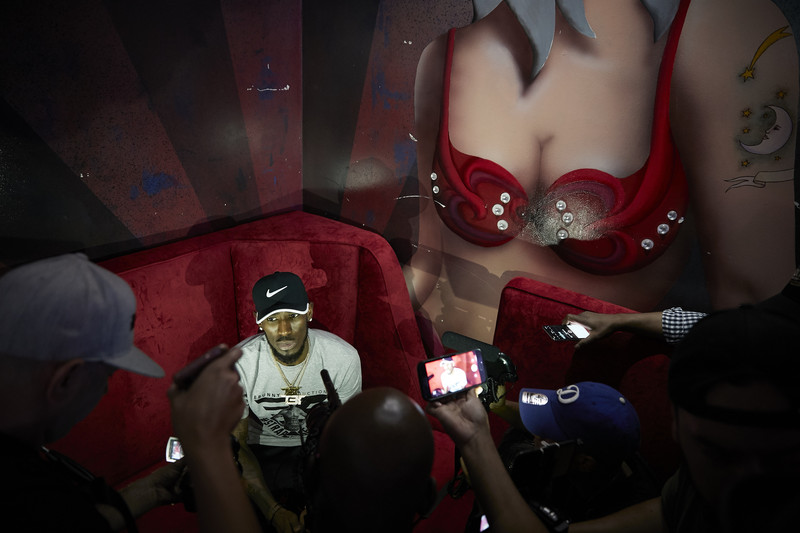 Robert Easter is cornered by a herd of microphones in The Conga Room at LA Live. As Easter told one reporter of Garcia’s style, “It’s nothing I haven’t seen before,” the Toledo native must feel the same toward the endless stream of questions coming his way. 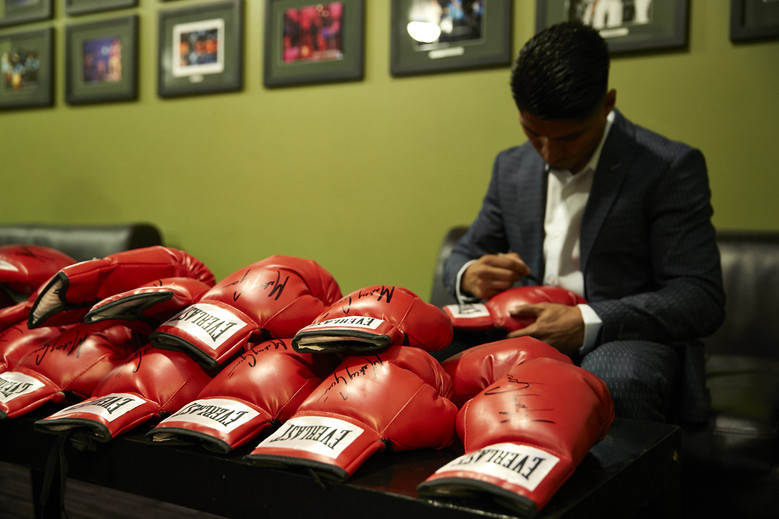 The champ signs bright-red Everlast gloves for fans in the green room, before going onstage to greet the media. 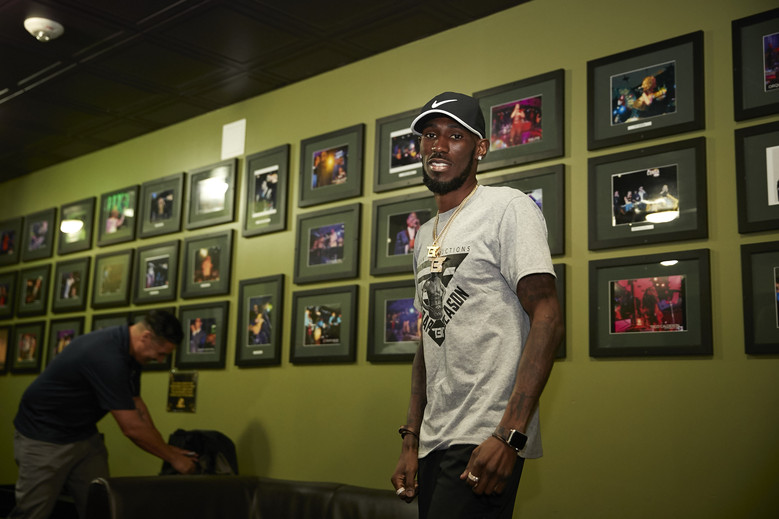 Robert Easter catches sight of the sole photographer in the green room, before walking onstage for the final fight press conference. There are few places aside from their hotel rooms that the fighters can escape the invasive eye of the media. 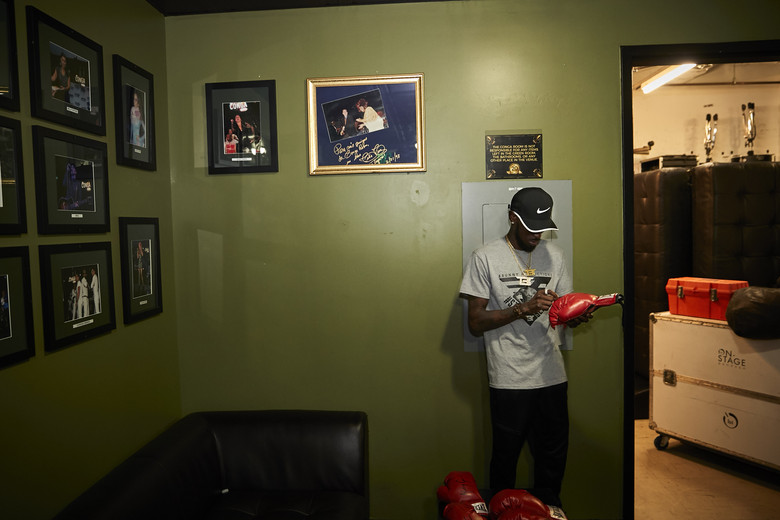 The soft-spoken champion does his duty, signing glove after glove for fans and friends. His lithe physique belies his power. At 5’ll”, the lightweight packs an electric power in his 135-pound frame. 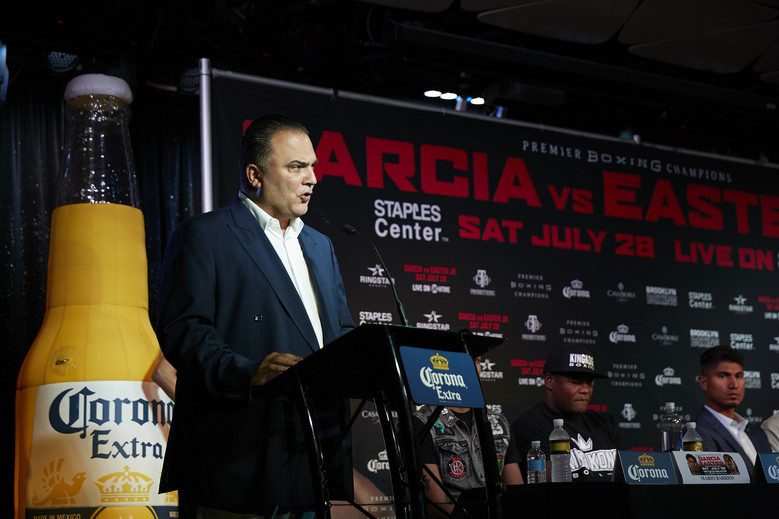 Promoter Richard Schaefer greets the media and wastes no time extolling the praises of the two co-stars of the main event. Schaefer is responsible for creating some of the largest promotions in boxing history during his tenure at Golden Boy Promotions. He has returned to the game with a new promotional company, Ringstar Sports. 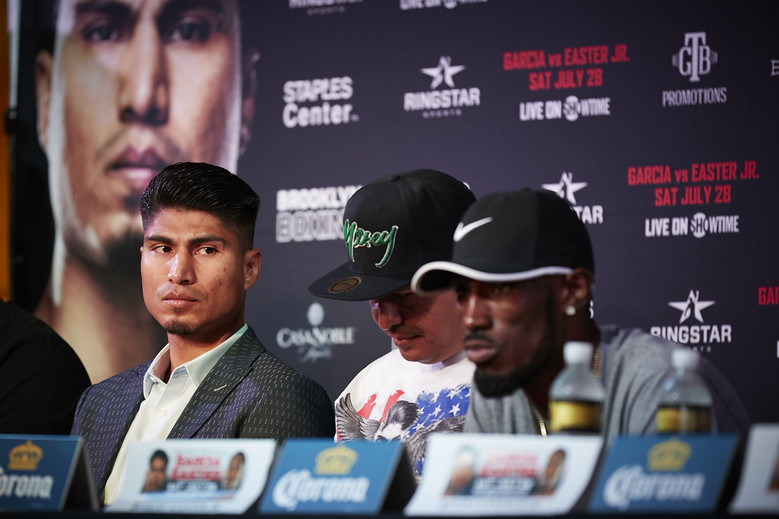 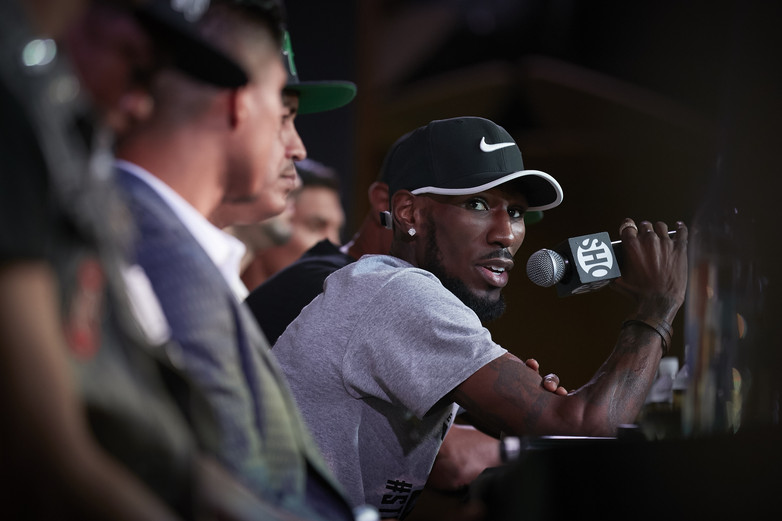 Largely uninterested in engaging in psychological games with his opponent, Robert Easter glances in Mikey Garcia’s direction while answering questions during the final press conference before fight night. He slightly undercuts Garcia’s success by suggesting he has fought few great champions aside from his friend Adrien Broner. In his turn, Garcia suggested that Easter actually lost his last fight against Javier Fortuna, a close decision won by the IBF champion. 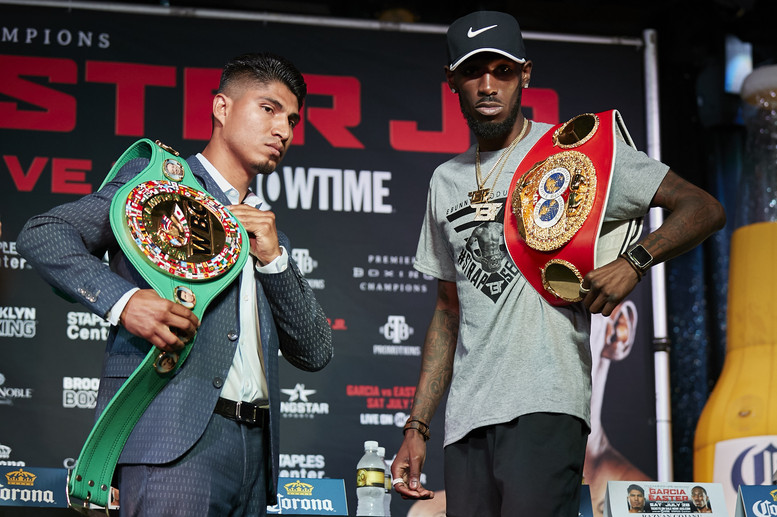 In the last ritual of the final press conference, both champions shoulder their straps before going toe-to-toe. 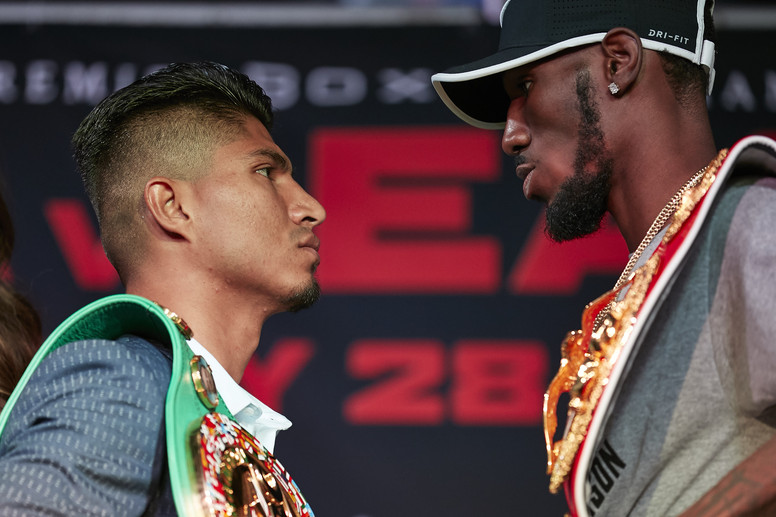 The two fighters, different in physique, wardrobe, and personality, gaze at one another before their rendezvous in the ring. Each seems tired of looking at and hearing about the other. In a sense, the media hype serves to heighten the animus between them. 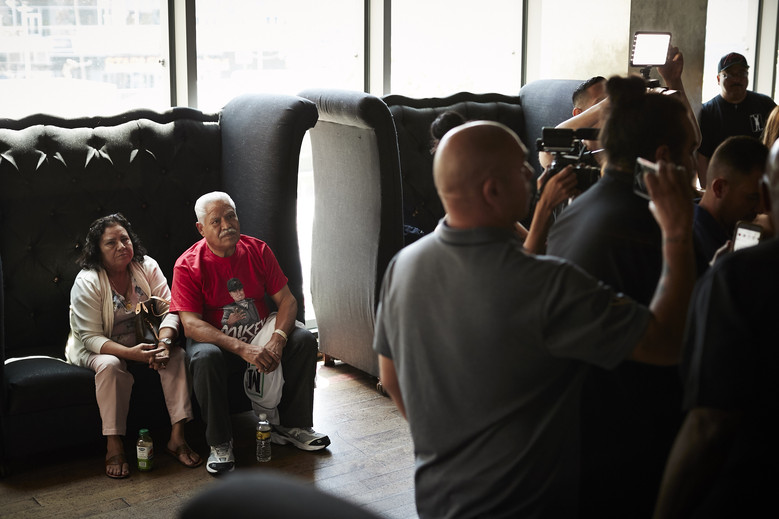 Mikey Garcia’s mother and father look patiently on as their son deftly manages a crush of media personnel. Before Mikey, Robert Garcia ran the same gauntlet as an IBF Lightweight Champion in the 1990s.

Check back tomorrow for the next step in the journey to fight night: the weigh-in.

Don’t have SHOWTIME? Upgrade today and get the best of SHOWTIME CHAMPIONSHIP BOXING, including Garcia vs. Easter!