In partnership with AT&T, HBO is releasing a series of posters depicting seven different Westworld host characters from the sci-fi adventure drama this May and June. Dolores Abernathy (Evan Rachel Wood) kicked things off, and Maeve Millay (Thandie Newton) is now available as supplies last in stores.

The posters come courtesy of Turkish-based illustrator and graphic designer Berkay Dağlar, whose season one poster helped inspire the design. Each poster illustrates different versions of the character it depicts, building off each character’s season one “reveries.”

Maeve’s poster features two versions of her previous narrative, when she played a homesteader with a young daughter. In one, they’re walking together in a field, before the Ghost Nation hosts and Man in Black (Ed Harris) attack their cabin. The second depiction is Maeve trying to defend herself and her child from the Man in Black, which we all know was fruitless because back then, the hosts couldn’t harm any park guests. 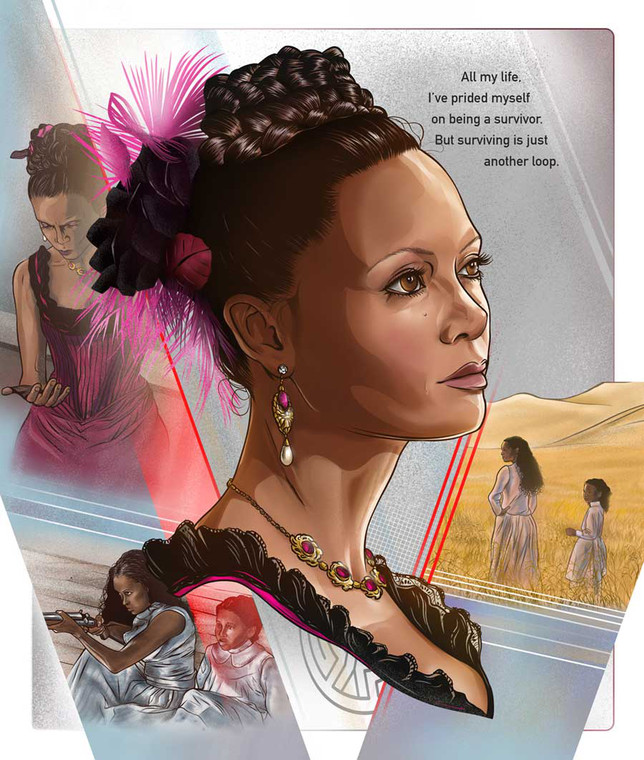 After that fateful attack, Maeve was reassigned to a different narrative, one in which she is the madam of Sweetwater’s Mariposa brothel. This storyline is highlighted on the poster in the illustrations and the selected quote, which is from season one’s seventh episode, “Tromp L’Oeil,” when Maeve tells technicians Felix (Leonardo Nam) and Sylvester (Ptolemy Slocum):

“All my life, I’ve prided myself on being a survivor. But surviving is just another loop.”

On the show, Maeve follows that up by declaring she’s going to be free. This is a turning point in Maeve’s journey to becoming sentient, as she realized just what was going on in Westworld and decided she had had enough of being controlled by the humans who run the park. But Maeve found she couldn’t leave the park without her daughter, so season two finds her on a journey to her child before she tries to escape into the outside world.

Pick up the Maeve poster for free while supplies last at any AT&T retail store nationwide and be sure to keep up with Westworld on DIRECTV.