Best Sci-Fi Movies Based on Books

A picture might be worth a thousand words, but these pictures owe their existence to some of the finest sci-fi novels out there. These are the best sci-fi movies based on books.

It’s easy to see why Hollywood loves turning books into movies — you get an established story, characters, and fan base. That fan base can be a double-edged sword, though, if your adaptation fails to live up to expectations. That wasn’t a concern for the movies below, which more or less smashed it out of the park. We’ve got a great mix of sci-fi classics from renowned directors, some decades in the making, and even one book that was written alongside the movie.

Of course, it’s hard to please everyone, and we all have our own ideas of how characters look and speak, how world’s are visualized, and what we dream up in our heads when reading these epic novels. But these movies have built wonderfully on their original stories and taken on an appeal all of their own. These are, in our humble opinion, the best sci-fi movies based on books.

If you’re excited by these entries and you’re eager for more, we’ve also put together the best sci-fi tv shows based on books because books aren’t just for feature-length movies. And if that hasn’t quite quenched your thirst, for sci-fi hits we have also collated some of the best space movies and best space horror movies. Or if you’d rather pick up a book, this list of the best space books are well worth a read. 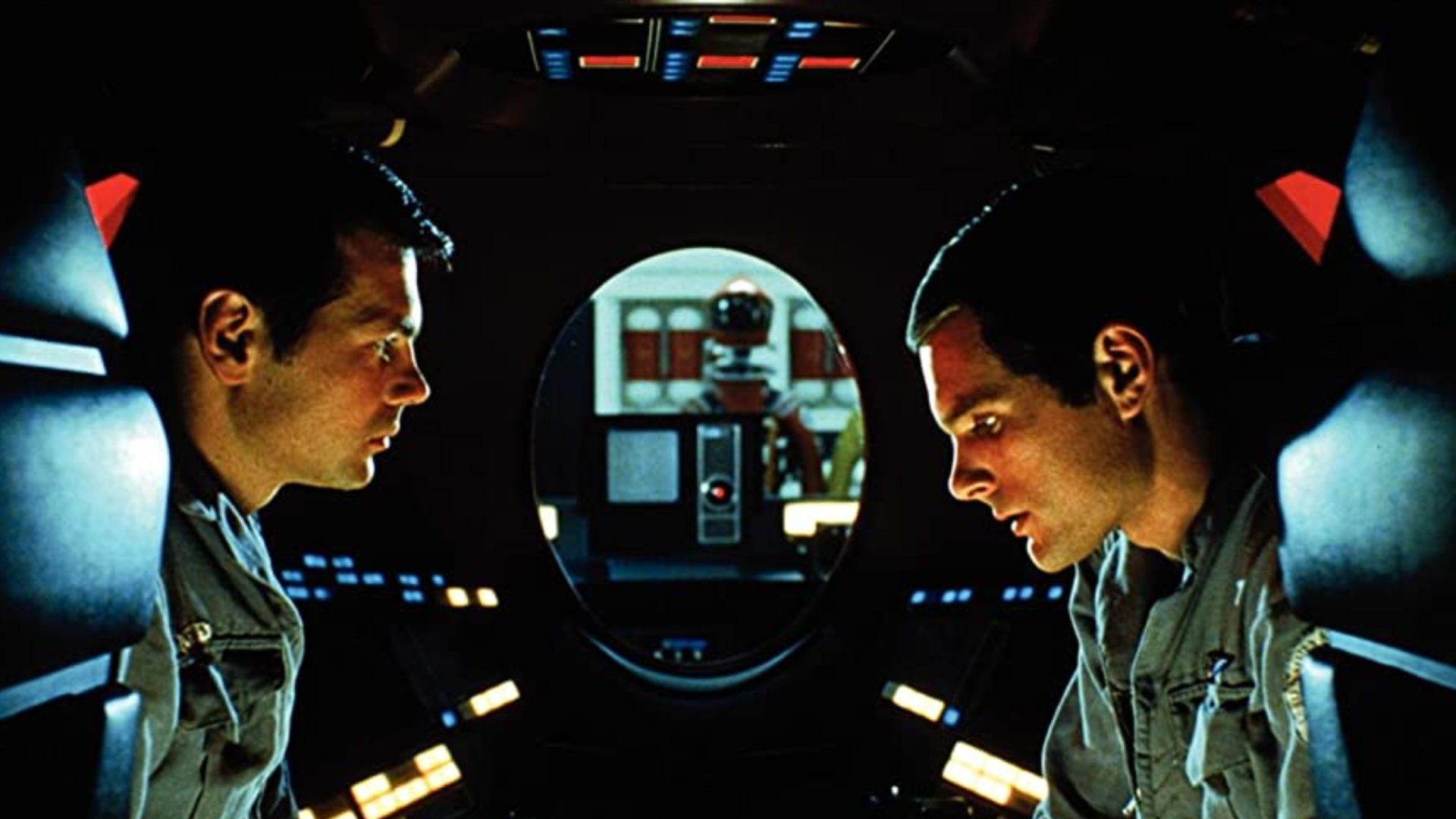 Reshaped for the big screen by award-winning director Stanley Kubrick, 2001: A Space Odyssey is a novel by Arthur C. Clarke. Interestingly, though, the book was in fact published after the film and was notably worked on by both Kubrick and Clarke alongside the creation and filming of the movie. It’s the story of an unusual artifact uncovered on the surface of the Moon.

Both mankind and a supercomputer called HAL 9000 set out to find its origins while traveling through time and space. It’s a multi award-winning movie from the sci-fi realm and it’s got one hell of an epic soundtrack to boot. 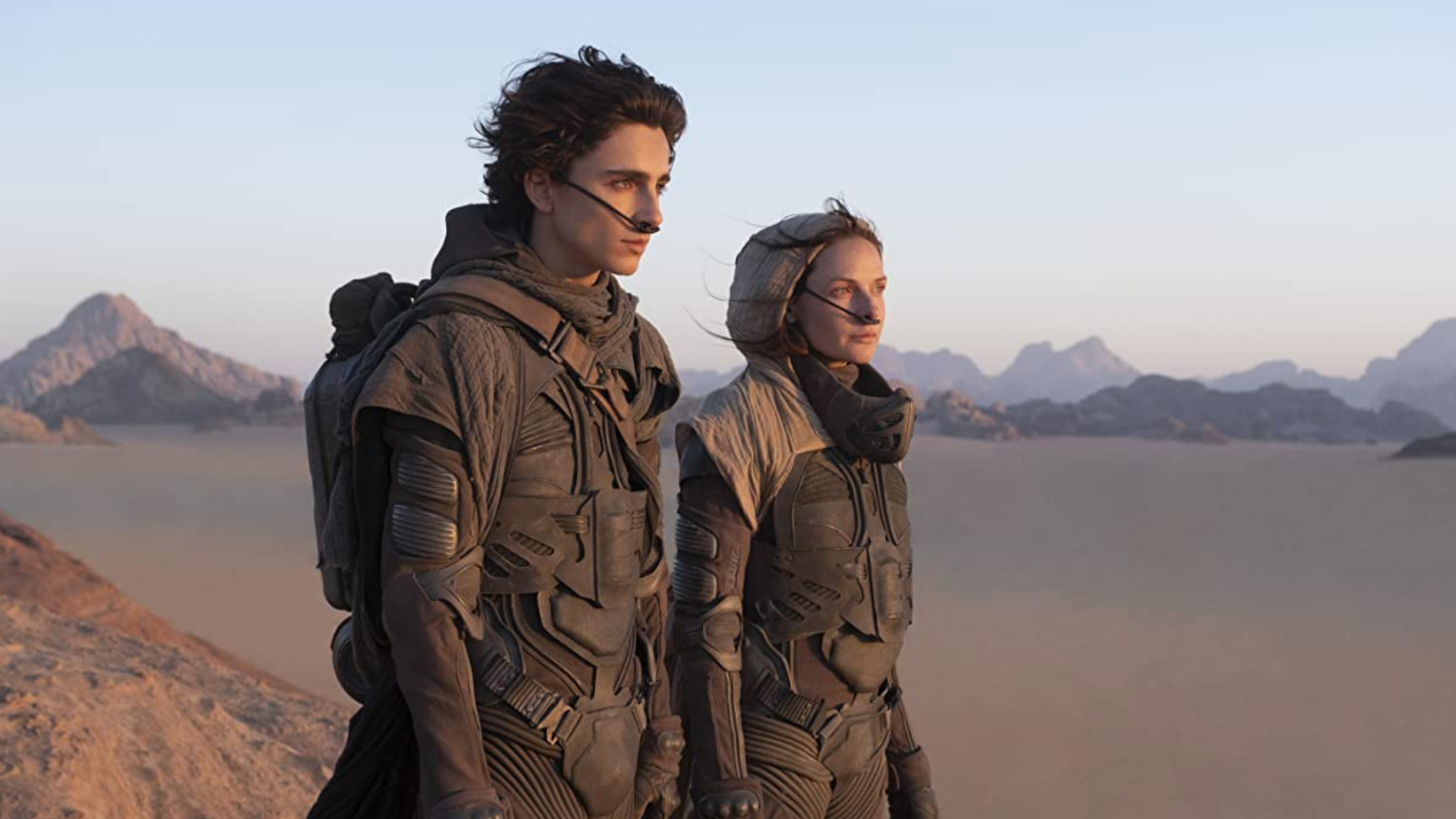 From Frank Herbert’s 1965 novel of the same name comes Dune. Set on an inhospitable desert wasteland of the planet Arrakis, the story follows Paul Atreides (Timothée Chalamet) as he takes on his role of stewarding the galaxy’s most dangerous planet. Why is it so dangerous? Well, it is home to a psychedelic space drug known more commonly as “spice” (or melange) that can both extend human life and enhance mental abilities.

What follows is a dispute of intense proportions between battling planets that only those most fearless survive. Denis Villeneuve, the man behind such other sci-fi wonders as Arrival and Blade Runner 2049, takes the directorial seat for this epic adaptation and brings Arrakis to life. This movie only covers the first half of the novel, so you’ll have a part two to look forward to. 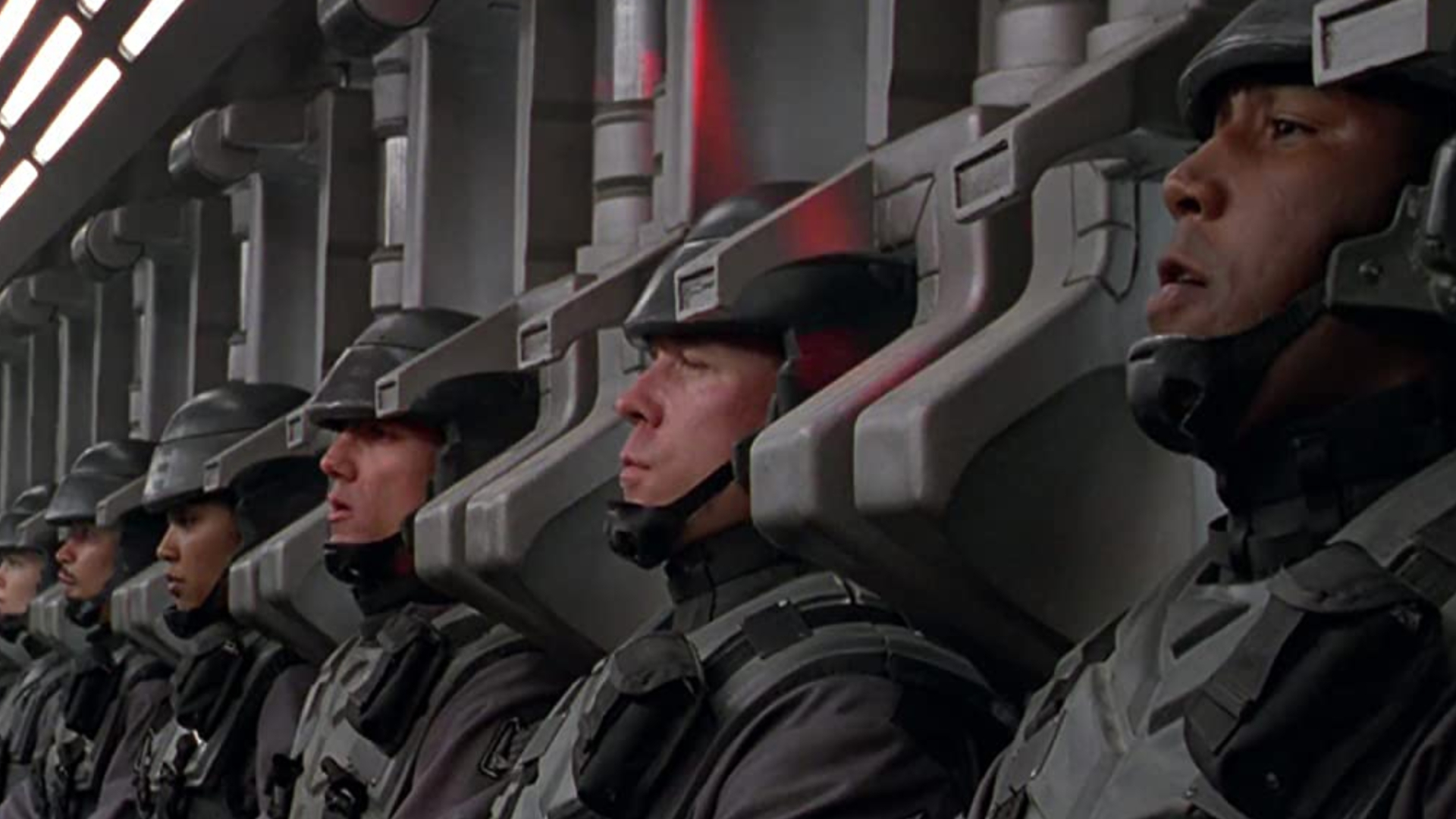 First published as a two-part serial in The Magazine of Fantasy & Science Fiction by Robert A. Heinlein, Starship Troopers follows a young soldier, Johnny Rico (Casper Van Dien), as he joins a futuristic military unit, the Mobile Infantry. He rises through the ranks during an interstellar war that pits him and his fellow soldiers against a race of giant alien bugs.

It’s all-out warfare and survival of the fittest intertwined with some high school sweetheart love. A wicked and wonderful sci-fi movie adaptation that ticks a lot of boxes. 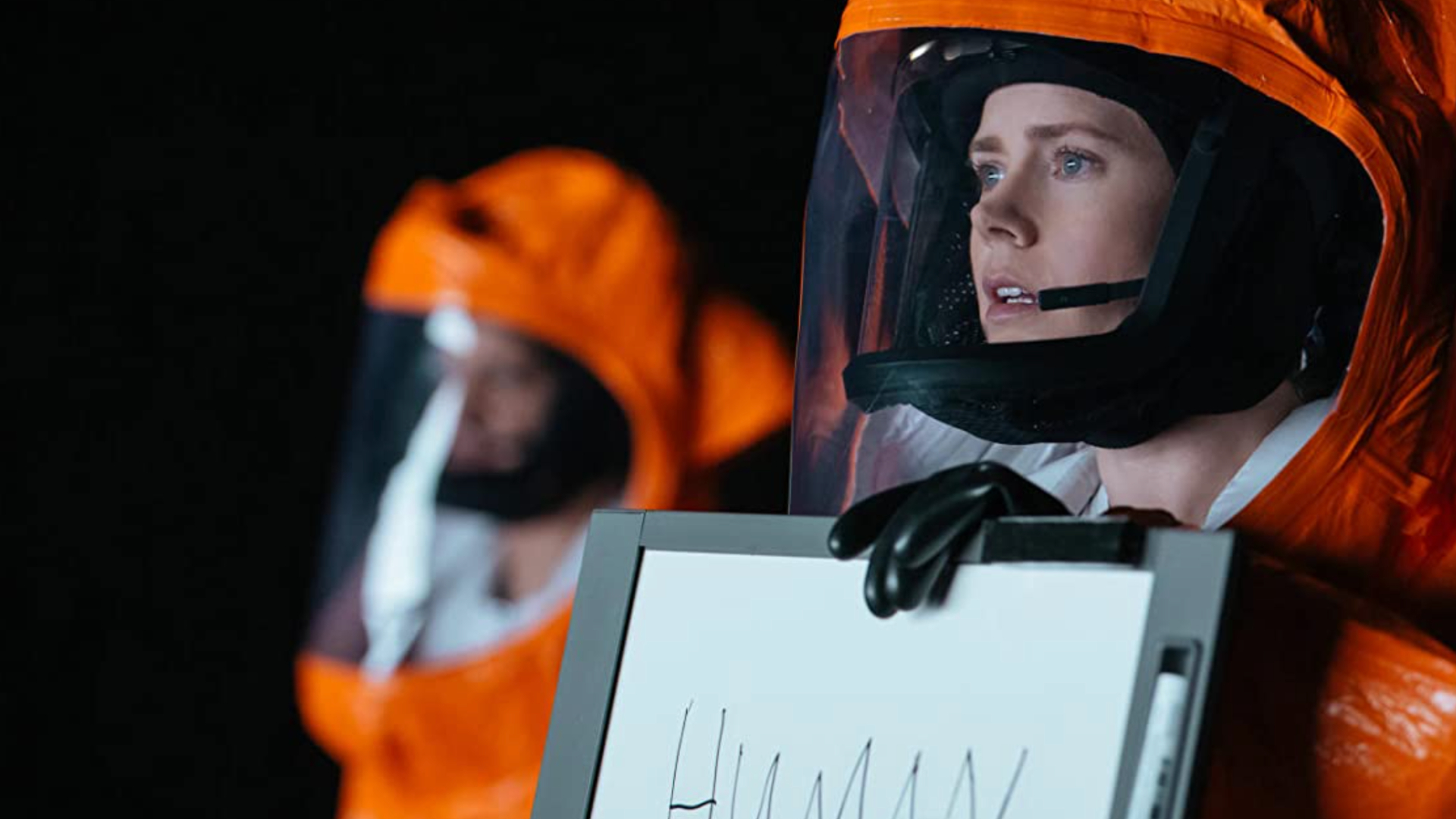 Another on our list by Denis Villeneuve, mentioned before for his 2021 adaptation of Dune, comes 2016’s Arrival — a stunning visualization of a short story from Ted Chiang’s Stories of Your Life and Others. Here, linguistics professor Louise Banks (Amy Adams) is brought in with her team to interpret the language of extraterrestrials who have arrived in their spaceships across Earth.

Like many in this list, Arrival is intense, gripping, and breathtaking in nature as the very fate of humanity hangs in the balance. This sci-fi epic tells the story of a world faced with unthinkable choices and with some epic plot twists along the way. 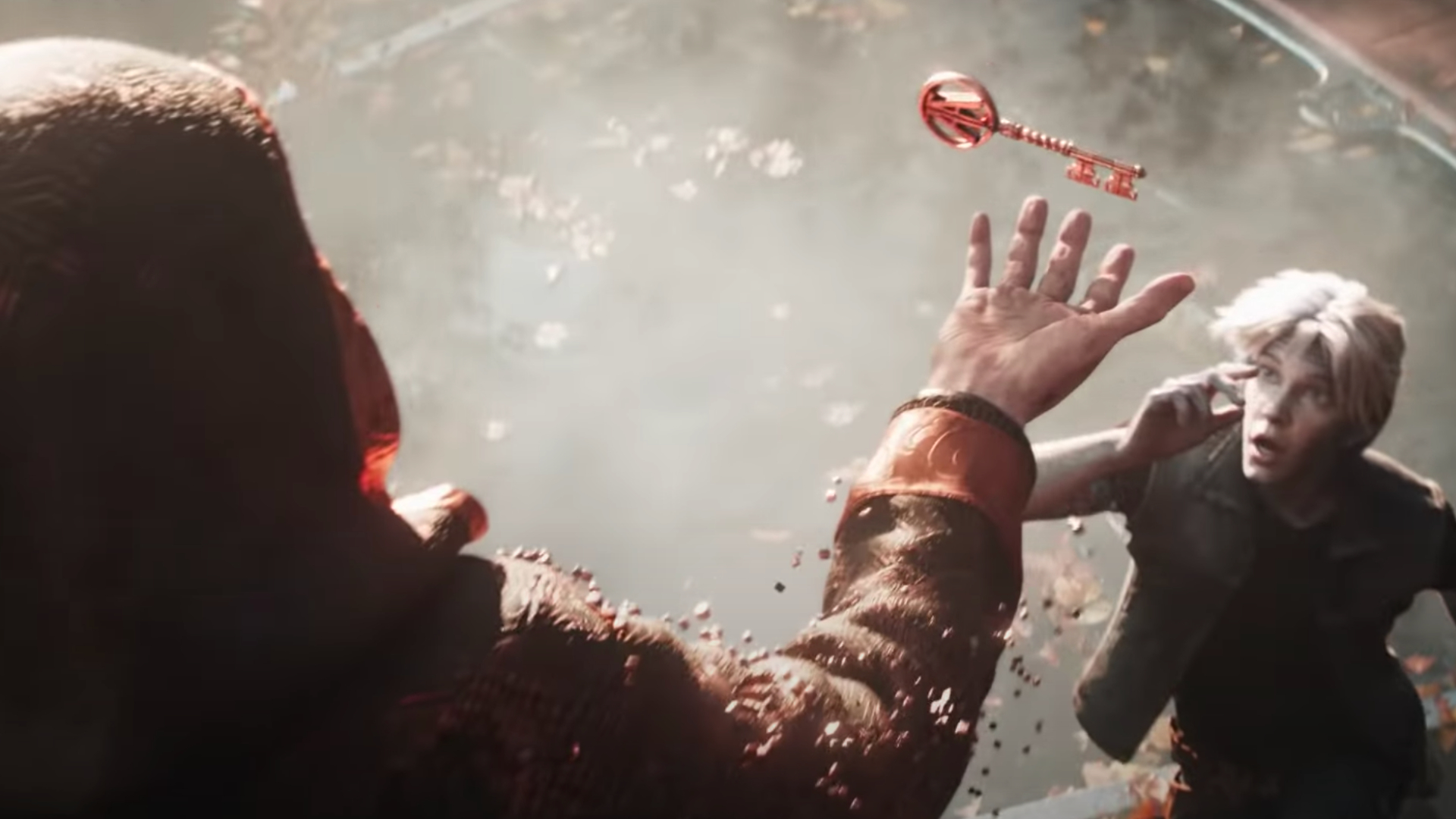 Ready Player One by Ernest Cline depicts a world where virtual reality provides a second home called the OASIS for those wishing to escape a suffering Earth in 2045. The creator, James Halliday, passes away but leaves his fortune to any player that can uncover all the Easter eggs that he’s hidden within the OASIS.

With such a prize at stake, factions form to grind out Halliday’s memories and discover the hidden keys. One solo player, Wade (Tye Sheridan), sets out on his own personal quest alongside friends he’s made within the game. An exhilarating combination of sci-fi, gaming, and the technology we dream about.

6. The Hitchhiker’s Guide to the Galaxy 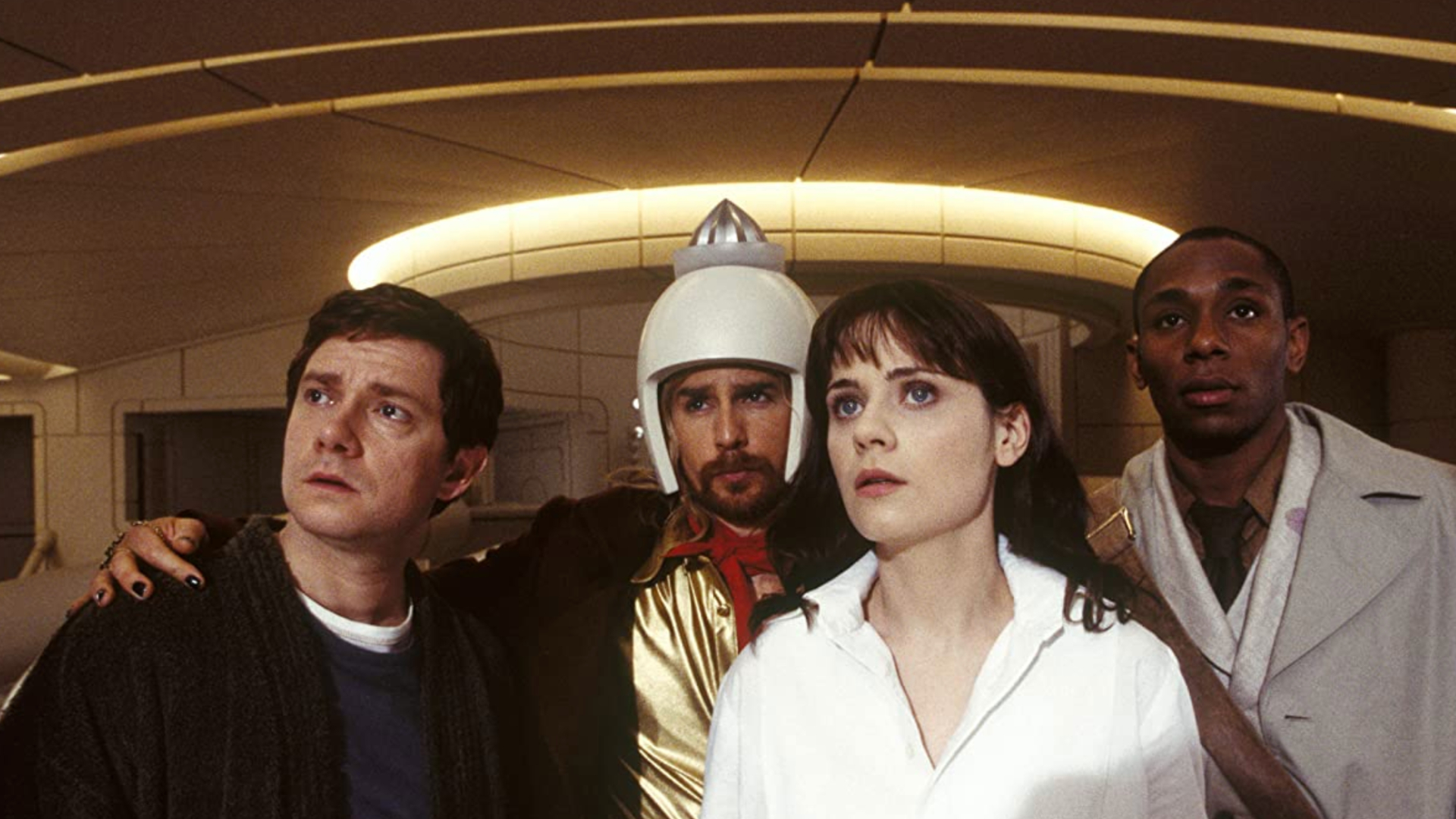 From the famous six-book series by author Douglas Adams, The Hitchhiker’s Guide to the Galaxy is the only movie adaptation with no sequel in sight, but what it lacks in quantity, it makes up for in quality. Arthur Dent (Martin Freeman) is whisked from the mundanities of everyday life by his friend, Ford (Yasiin Bey), and informed that he has in fact been saved from Earth’s impending doom.

Doom aside, Ford, an alien himself, introduces Arthur to his collection of friends aboard the spaceship and they embark on an adventure across space to discover the meaning of life.

7. War of the Worlds 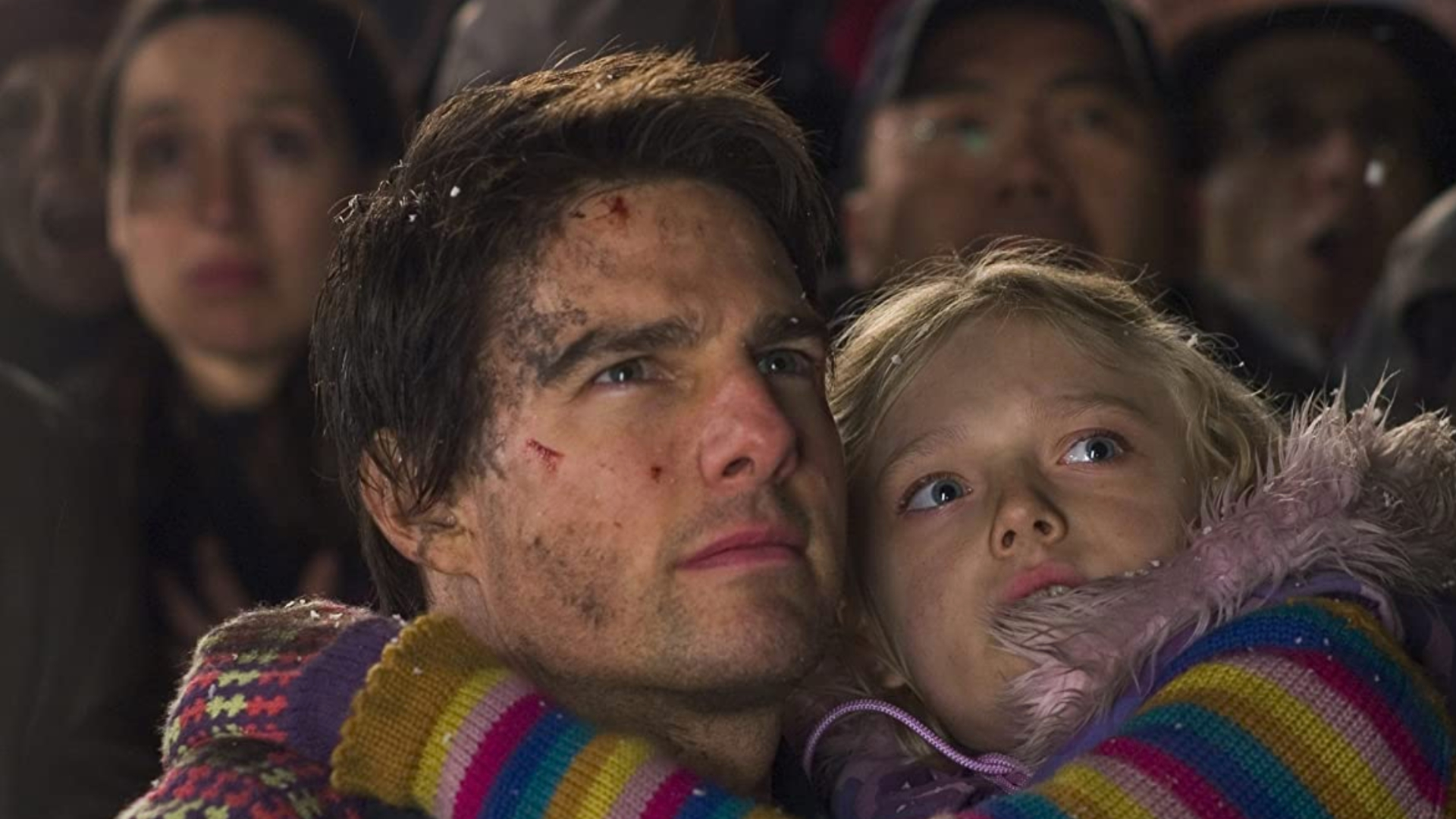 H. G. Wells’ novel The War of the Worlds was taken into the loving hands of Steven Spielberg as he shaped this movie adaptation of the same name. Starring Tom Cruise as Ray Ferrier, an alien invasion comes to Earth and everyone must fight for survival. Ray, uniting with his family (a standout role for Dakota Fanning, playing Ray’s daughter Rachel), tackles both the impending doom on civilization and bringing himself and his loved ones back together. It’s a movie filled with a whole lot of suspense! 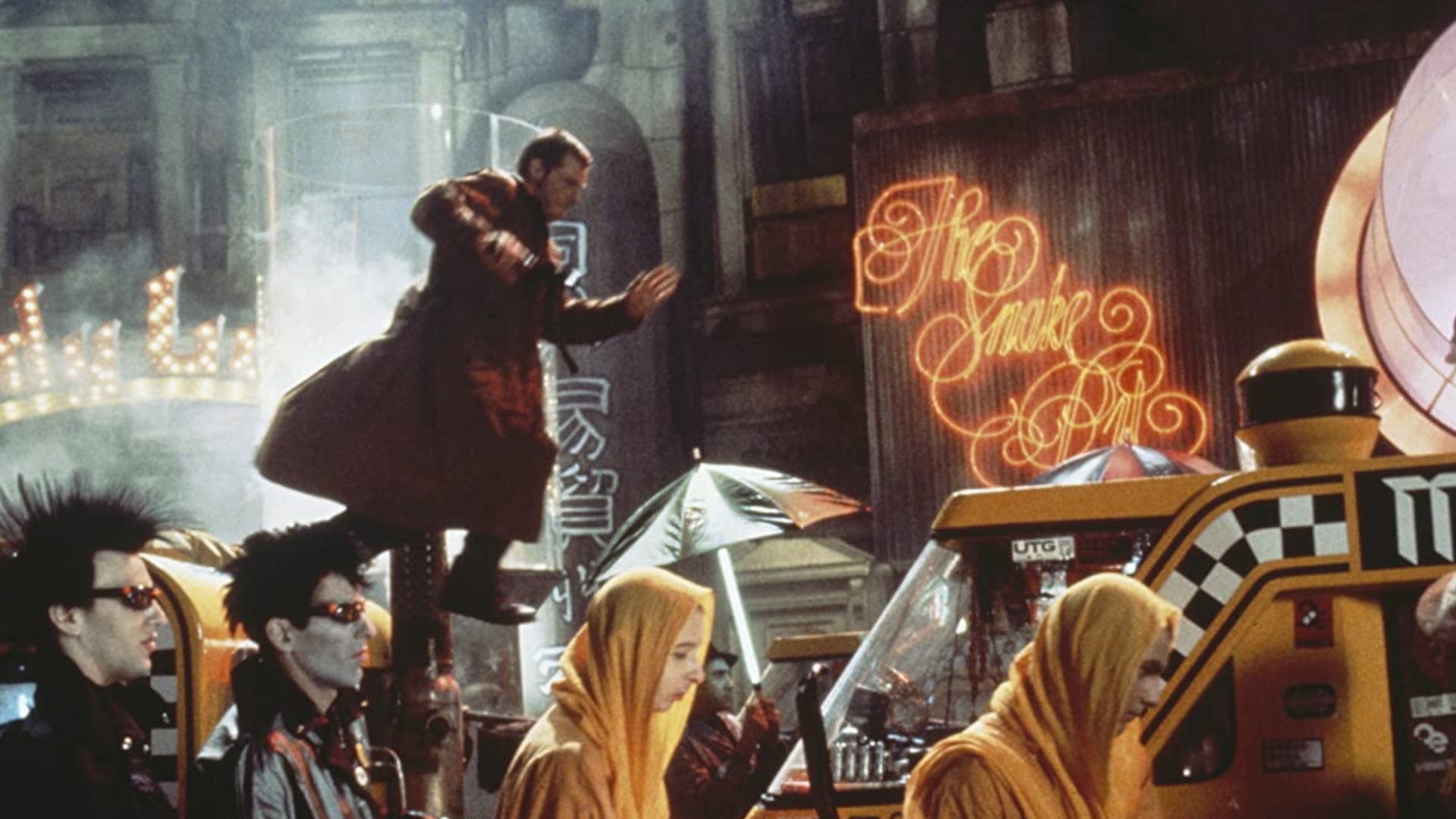 From prolific sci-fi writer Philip K. Dick comes the movie adaptation of his famed novel, Do Androids Dream of Electric Sheep?. Directed by Ridley Scott and released in 1982, this is what was imagined to be Los Angeles in 2019 … but, as we know, that’s not quite the case.

Blade Runner follows Rick Deckard (Harrison Ford), an ex-policeman given a special mission to hunt down and eliminate four escaped androids, which ultimately leads Deckard to question his own existence. Stunning visual style, expert pacing, and deep musings on what it means to be human make Blade Runner an all-time classic. 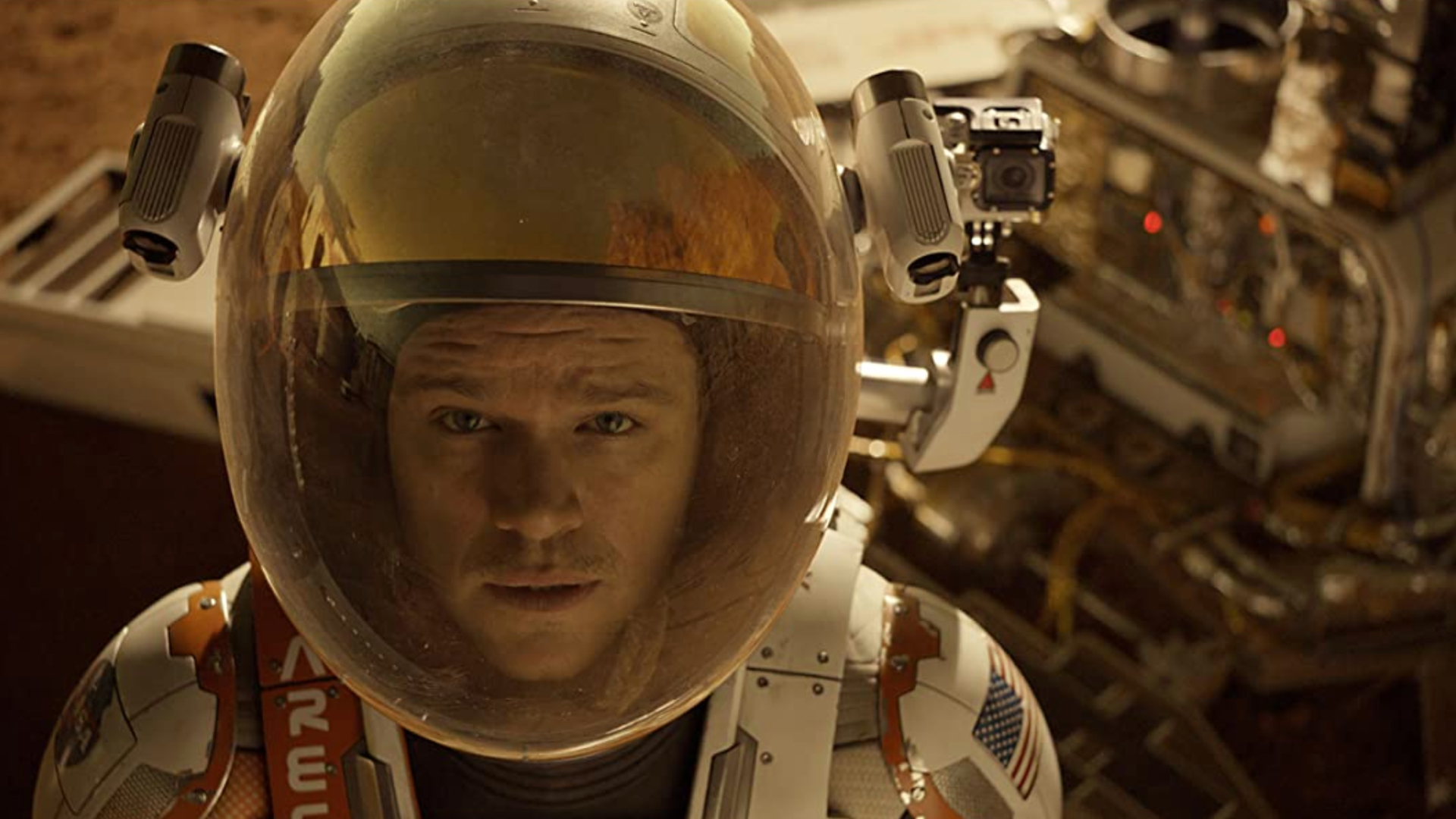 Matt Damon stars as Mark Watney, an astronaut stranded on Mars left to fight for his survival and signal to Earth for rescue. Award-winning director Ridley Scott takes on this novel of the same name by Andy Weir as we watch with bated breath for almost two and a half hours as a man cut off from civilization uses minimal resources to survive on an inhospitable planet.

Presumed dead after a huge storm, it’s a race against time as Mark fights for his life whilst NASA and his fellow astronauts figure out a way to bring him home. It’s also worth noting that The Martian pays great attention to scientific accuracy, making it one of the most realistic space movies we’ve ever seen. 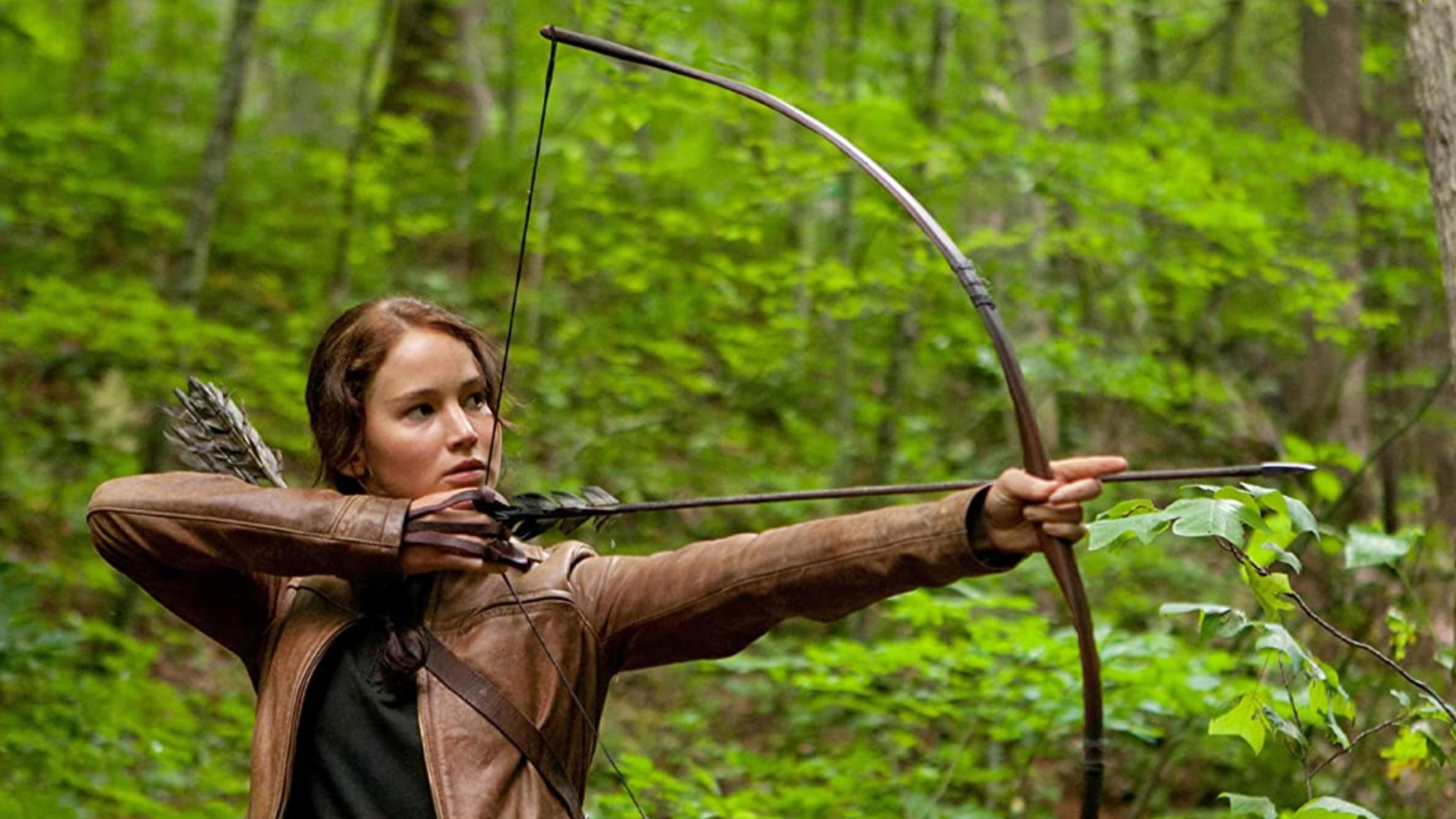 From the best-selling trilogy by Suzanne Collins, The Hunger Games is the first of four movies. A dystopian, post-apocalyptic setting takes this story to North America, split into 12 districts, each varying in degrees of poverty and desperation. At the center, the Capitol of Panem, runs a nationally televised event called The Hunger Games.

For this, a boy and a girl are randomly selected from each district to compete in a battle royale, fighting to the death to become the one survivor and district winner. Katniss Everdeen (Jennifer Lawrence) nominates herself as tribute to protect her younger sister and embarks on a terrifying fight for survival.

This article was written by Grace Dean from Space and was legally licensed through the Industry Dive publisher network. Please direct all licensing questions to legal@industrydive.com.