There are few words that describe the 6-4, 210-pound left-handed hitting, right-handed throwing Japanese superstar. Ohtani is unique. He is distinctive. He is exceptional. Ohtani is all of that, and more. He’s captivating. Riveting. And he’s fascinating.

Ohtani will turn 28 in July, and he is in the prime of his baseball career.

According to Baseball-Reference.com, Babe Ruth, the player many baseball fans consider the best ever to play the game, slugged and pitched his way to the Hall of Fame from 1914 to 1933. He hit 714 home runs, drove in 2,214 runs, and finished his career hitting .342 in 10,626 plate appearances.

Ruth was unparalleled. But that was a different era. A different time. Baseball has changed.

In the modern MLB environment, as a pitcher, Shohei Ohtani is facing hitters who are bigger and stronger and living life with advanced nutritional and technological assistance. Those are factors that were not available in Ruth’s era.

As a hitter, Ohtani is facing pitchers with the same modern-day advances as hitters. Unlike in the time of Babe Ruth, Ohtani has the advantages of advanced statistical metrics and tendencies, as well as players who have tremendous access to conditioning facilities and equipment. 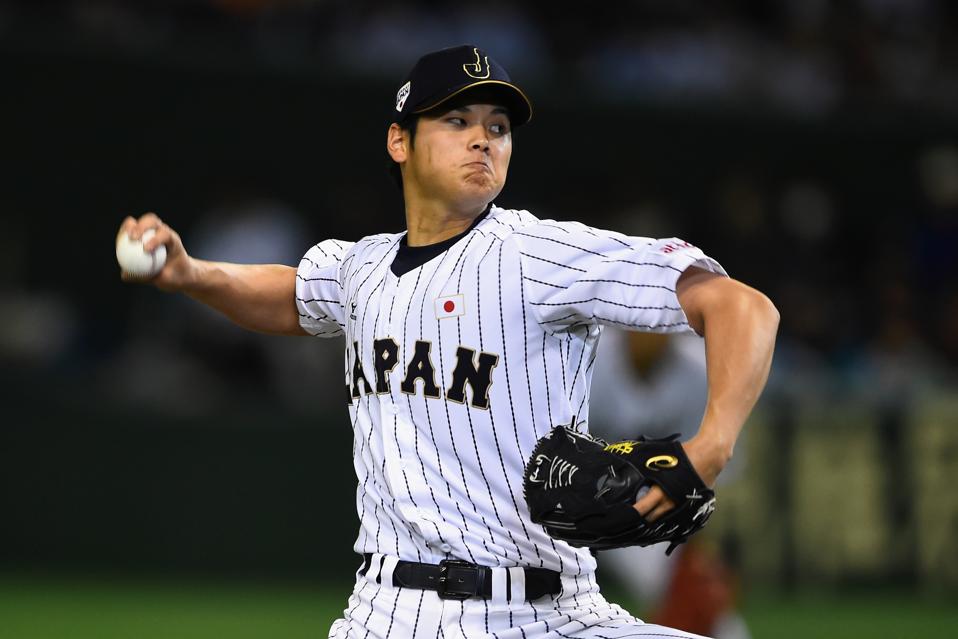 Starting pitcher Shohei Otani #16 of Japan throws in the top of fifth inning during the WBSC Premier 12 semifinal match between South Korea and Japan at the Tokyo Dome on Nov. 19, 2015, in Tokyo. Photo by Masterpress/Getty Images

Before signing with the Angels as an international free agent in 2017, Ohtani played for the Hokkaido Nippon Ham Fighters in the Japan Pacific League. He played with the club from 2013-2017.

These are among some of Ohtani’s accomplishments growing up and then playing professionally in Japan: 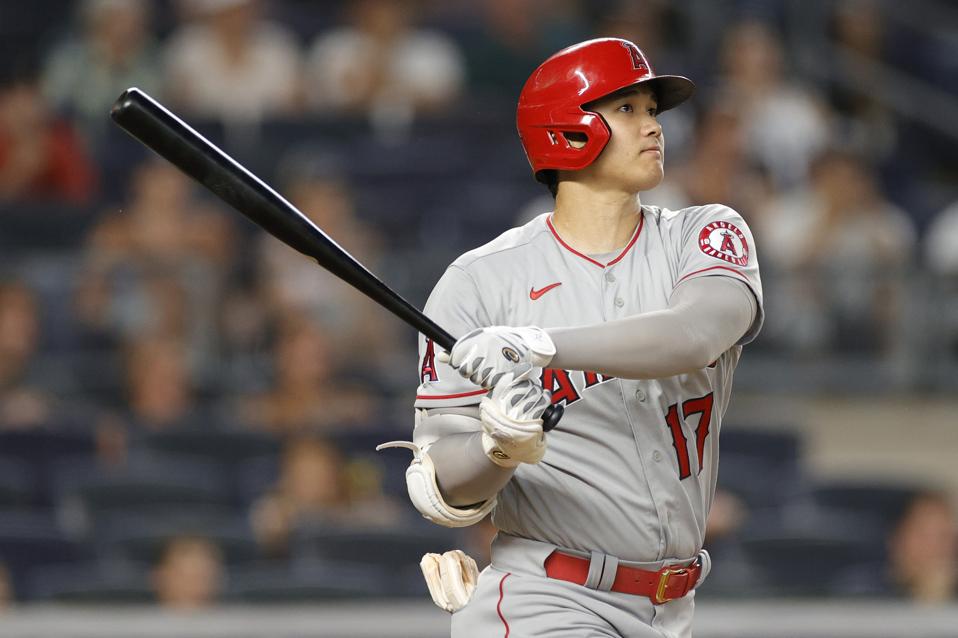 Shohei Ohtani #17 of the Los Angeles Angels hits a two-run home run during the fifth inning against the New York Yankees at Yankee Stadium on June 29, 2021, in the Bronx borough of New York. Photo by Sarah Stier/Getty Images

With the Los Angeles Angels

In 2017, the Ham Fighters posted Ohtani to play with a professional team in the United States. Ohtani drew interest from seven MLB clubs, and the Ham Fighters received a $20 million posting fee from the Los Angeles Angels, the team chosen by Ohtani. Ohtani signed a contract with the Angels worth $2.315 million.

After Ohtani signed his contract, it was announced that he was diagnosed with a sprain to his right ulnar collateral ligament, which is on the inner part of the elbow. Ohtani received a platelet-rich plasma injection to ease the strain and treat the injury.

Ohtani was the Angels designated hitter on opening day 2018. He got a single in his first at-bat. He made his pitching debut April 1, 2018. He worked six innings, and got the win.

Ohtani left another start June 7 due to a blister on his finger, the second time he had had to leave a start for a blister. The next day, Ohtani was placed on the disabled list with a grade 2 sprain, again to the ulnar collateral ligament in his right elbow. He again received the platelet-rich plasma treatment.

Ohtani returned and went on to have a wonderful rookie season, winning Rookie of the Year honors in the American League. He hit .285 with 22 home runs, 61 RBIs and 10 stolen bases.

As a rookie, Ohtani made 10 starts, and finished with a record of 4-2 with a 3.31 ERA and 1.16 WHIP. His elbow troubles limited his pitching appearances.

Ohtani has joined Babe Ruth in becoming the only players with 10 pitching appearances and 20 home runs in a season.

After further damage was detected in his ulnar collateral ligament, in the September following his rookie year, Ohtani was advised by doctors to undergo Tommy John surgery. He had the surgery in October 2018.

Ohtani recovered well, went on to both hit and pitch, and after gaining experience, he had an amazing 2021 season for the Angels.

To watch Ohtani in action check out the Los Angeles Angel’s schedules and team page here!

Ohtani finished last year with a WAR (wins above replacement) of 9.0, highest in the American League. His slugging percentage (.592) was second-highest in the league.

Ohtani hit 46 home runs, scored 103 runs and drove in 100 runs. While he struck out 189 times in 639 plate appearances, he also walked 99 times. His 20 intentional walks were the highest in the league, which was a true reflection of the respect he earned from opposing pitchers.

According to fangraphs.com, Ohtani is in the final year of his initial Angels contract. He will be eligible for arbitration next year, and he could become a free-agent in 2024. If Ohtani remains as healthy as he is now, it is doubtful the Angels will allow that to happen. 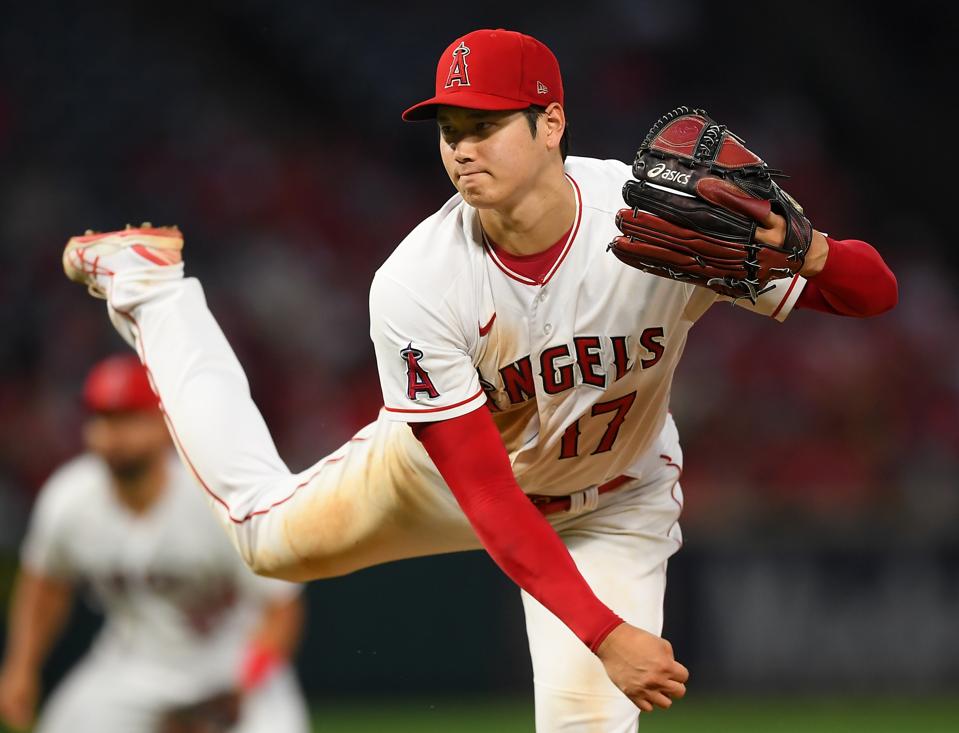 Shohei Ohtani of the Los Angeles Angels pitches in the game against the Colorado Rockies at Angel Stadium of Anaheim on July 26, 2021, in Anaheim, Calif. Photo by Jayne Kamin-Oncea/Getty Images

After watching Ohtani as a pitcher and hitter, here are this scout’s thoughts about his multiple talents:

Ohtani’s four-seam fastball sits at 96-97 miles an hour on a normal day. He has a very good feel for the pitch, and he can elevate the location and put the pitch up in the eyes of the hitter.

According to brooksbaseball.net, he throws his fastball on 35.93% of his pitches.

As this scout has watched him over the years, his most devastating offering is his split-finger pitch. He gets amazing sink on the ball, and hitters often swing over the pitch. He can set up the very deceptive split with his fastball. The sinking split-finger pitch usually comes in at 90 mph.

Once the hitter is looking for the fastball or split, Ohtani can come with a wicked slider, cutter, curve or changeup. All are pitches that are well above Major League average in quality.

With six pitches to consider and prepare for, hitters are left off-balance and confused as they try to anticipate the next pitch. Changing the eye-level of the hitter is crucial to Ohtani’s pitching arsenal and overall plan.

Pitching every 6th day in the Angels rotation will hopefully help preserve Ohtani’s surgically repaired elbow. In Japan, Ohtani pitched once a week, which is their national norm.

As a hitter, Ohtani barrels the ball and has substantial power throughout his frame. He can hit for average, hit for power, drive in runs, score runs, and steal bases. He can do everything that is asked of a high-impact offensive star.

Not since the great Babe Ruth have baseball fans seen a player with the ability to dominate both at the plate as a slugger and on the mound as a starting pitcher. Shohei Ohtani can do just that.

Ohtani is a marvel. His accomplishments are becoming legendary.

After having Tommy John surgery early in his tenure as a Japanese free-agent acquisition by the Angels, Ohtani is keeping fans in their seats as they watch him on the mound or at the plate.

Ohtani left the game May 1, 2022, due to right groin tightness. It will be a condition he and the team will have to monitor closely. It does not appear to be serious.

This early in the new season, Ohtani isn’t having the type of overwhelming success on offense he had last year. However, on the mound, he looks to be every bit as good.

Without a doubt, Shohei Ohtani is a very special baseball player.

This article was written by Bernie Pleskoff from Forbes and was legally licensed through the Industry Dive Content Marketplace. Please direct all licensing questions to legal@industrydive.com.

Which teams had the best 2022 NFL draft? Here are our picks.