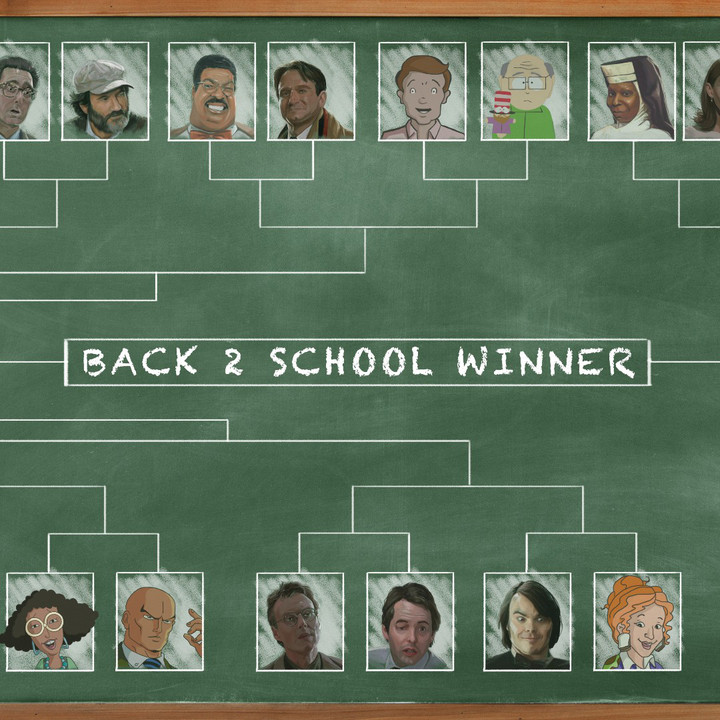 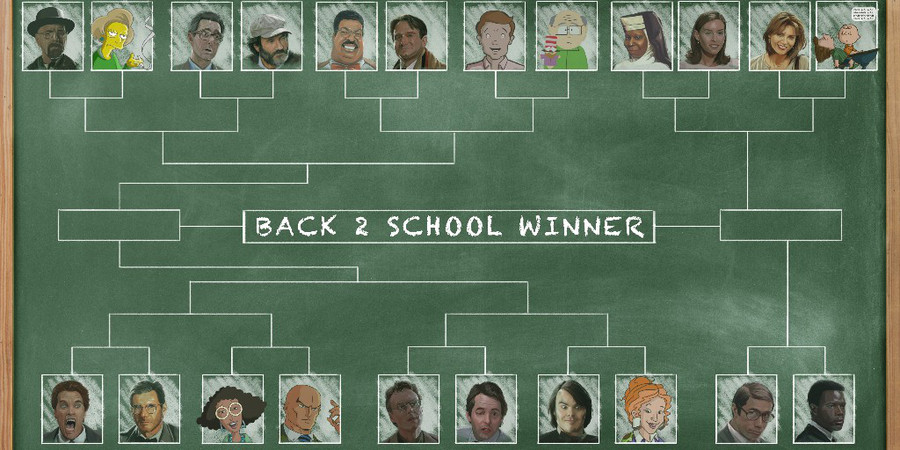 The Ultimate Back-to-School Teacher Showdown: Round 2

While school might not look the same this year, teachers are still giving their all and then some. With that in mind, we thought there’d never be a better time to pay tribute to the hardworking educators keeping it all afloat. So we’re revisiting our all-time favorite teachers from film and television and pitting them against each other in a battle of the books.

A host of iconic profs duked it out in Round 1 (which you can check out here), and now we’re down to the best of the best for Round 2. Vote for your favorite picks below, and check back soon to see who made the cut in Round 3.

Edna Krabappel has been with us almost as long as “The Simpsons” has, from 1990 until the death of the character’s voice actor, Marcia Wallace, in 2013. To call Edna long-suffering is to put it lightly; after all, she had to teach Bart Simpson fourth grade for more than 20 years. She may be a chain smoker and she may sometimes get a bit tipsy on the job, but Edna is a portrait of resilience: always on the lookout for new love, and always telling it like it is.

Then there’s Sean Maguire (Robin Williams). In Gus Van Sant’s “Good Will Hunting,” he’s given the uphill task of breaking down the defenses of Will Hunting (Matt Damon), a working-class janitor who happens to be a mathematical genius. Sean knows when to pull his punches and when to go for the tough love. And, unlike others around him, he sees the troubled Will as a human being in need of help rather than a means to an end.

There’s maybe no cinematic educator more inspiring than John Keating (Robin Williams), the beloved English teacher at the center of Peter Weir’s “Dead Poets Society.” Mr. Keating reaches deep into the hearts of the students at the Welton Academy and encourages them to appreciate the power and beauty of the written word, which is no small feat considering he’s teaching the extremely repressed students at an all-boys’ prep school circa 1959. O Captain! My Captain! indeed.

As with all the adults on deadpan cartoon classic “Daria,” English teacher Timothy O’Neill (voiced by Marc Thompson) is an object of ridicule. In contrast to the hair-trigger Mr. DeMartino, Mr. O’Neill is a ball of sunshine: sweet, gentle, and too sensitive for his own good. In the ’90s, when snark and cynicism ruled the day, he did indeed seem ridiculous. But upon revisiting Lawndale High, there’s something incredibly winning — and, dare we say, inspirational — about Mr. O’Neill’s brand of open-hearted empathy.

Talk about a double act. In Bill Duke’s “Sister Act 2: Back in the Habit,” Deloris Van Cartier (Whoopi Goldberg) is a lounge singer pretending to be a nun, just like in the first film. But in the sequel, she also pretends to be a teacher in order to boost the spirits of the students at the underfunded St. Francis Academy. Deloris connects with her charges (including a young Lauryn Hill) through gospel harmonies, encouraging them to let it all out — and to use their pipes to save the school from financial ruin at the hands of an evil administrator (James Coburn).

Dr. Henry “Indiana” Jones (Harrison Ford) is a prof who thrives outside the classroom. Indy may not spend a ton of time at the lectern — though he does insist that “70% of all archaeology is done in the library” — but he certainly makes an impression. Besides, what better person to teach you about powerful ancient artifacts than the guy who spends his free time wresting them from the clutches of the Third Reich?

As a progressive educator, fourth-grade teacher Miss Grotke (voiced by Allyce Beasley) was truly decades ahead of her time in the late-’90s animated series “Recess.” Through the show’s six seasons, she encouraged her students to take a stand against racist oppression, embrace feminism, and question gender norms. Are we saying that Miss Grotke opened the minds of a whole generation of millennial kids while they were tuning in to Saturday morning cartoons over a bowl of sugary cereal? We’re not NOT saying that.

Not that we’re biased here, but Rupert Giles (Anthony Stewart Head) is everything you could ever want in a mentor. The librarian/Watcher might not have a classroom of his own, but through the seven seasons of “Buffy the Vampire Slayer,” he serves as a guiding hand and father figure to the titular Slayer (Sarah Michelle Gellar) and her friends. It’s not easy to counsel and care for a group of teenagers when you live on the Hellmouth, but Giles pulls it off with aplomb, delivering a lecture on demonology one minute and a death blow the next. As he says to Buffy during one particularly low moment: “All you will get from me is my support — and my respect.”

“Rock ain’t about doing things perfect,” declares Dewey Finn (Jack Black) the down-and-out guitarist who poses as a substitute teacher in Richard Linklater’s “School of Rock.” Dewey might not be legit, but he does inspire a group of bored prep school kids to embrace their flaws and eccentricities and channel their newfound confidence into kick-ass jams. “School of Rock” has since been adapted into a Broadway musical and a TV show, so Dewey must’ve been doing something right.

One of the original tough-love teachers is Jaime Escalante (Edward James Olmos), the only competitor in this bracket that’s based on a real person — so we’ll give him a hall pass and let him move on to Round 3 unimpeded. Inspired by a true story, “Stand and Deliver” follows a math teacher at an underperforming East Los Angeles high school who schools his class in calculus against all odds. Mr. Escalante has to come to grips with not just inspiring his charges, but also with a racist educational system that’s keeping his largely Latinx students from achieving their dreams.