AT&T Entertainment Presents: Tyrion Lannister, The Hand of the Queen

All dwarves are bastards in their fathers’ eyes. Tyrion Lannister (Peter Dinklage) has grown up with this truth every day of his life. Despised by his family, and by extension, most of Westeros, the youngest Lannister has always had something to prove. Now, with Game of Thrones’ Great War approaching, he’s ready to prove it.

Of course, he’s no great warrior. He has no dragons, or even Little Birds. But what Tyrion does have is a razor-sharp wit and a powerful name. Armed with those two things, he’s managed to survive the Great Game so far. Indeed, this small man casts a very large shadow, and heading into the final season, he finds himself the main advisor to the Dragon Queen, Daenerys Targaryen. With the Army of the Dead knocking at the door, Tyrion may be the only one with the wisdom to make it out alive. For now, let’s take a look back at how Tyrion hustled his way from hung-over halfman to helpful Hand.

The Dwarf of Casterly Rock

Tyrion’s relationship with his family is…complicated. From the day he was born, Tyrion was despised by his father and sister, who blamed him for his mother’s death in childbirth. He spends his life being demonized and mocked on all sides, especially by his family, who admit they only reluctantly acknowledge him as a Lannister. His older brother Jaime is the only person who cares about him at all, and, when we meet Tyrion at Winterfell, he’s knee-deep in his two favorite coping mechanisms: drinking and whoring. We can see he’s a man of uncommon intelligence, but, at the moment, he’s squandering his potential.

Tyrion meets fellow black sheep Jon Snow and gives him a piece of advice: “Never forget what you are. The rest of the world will not. Wear it like armor, and it can never be used to hurt you.” They’re wise words, but it’s not entirely clear Tyrion has taken them to heart himself.

On the road back to King’s Landing, he’s taken captive by Catelyn Stark, who believes him responsible for ordering an attempt on her son Bran’s life. They arrive at the Eyrie, where he demands a trial by combat, which he wins with the help of a mercenary named Bronn (Jerome Flynn). 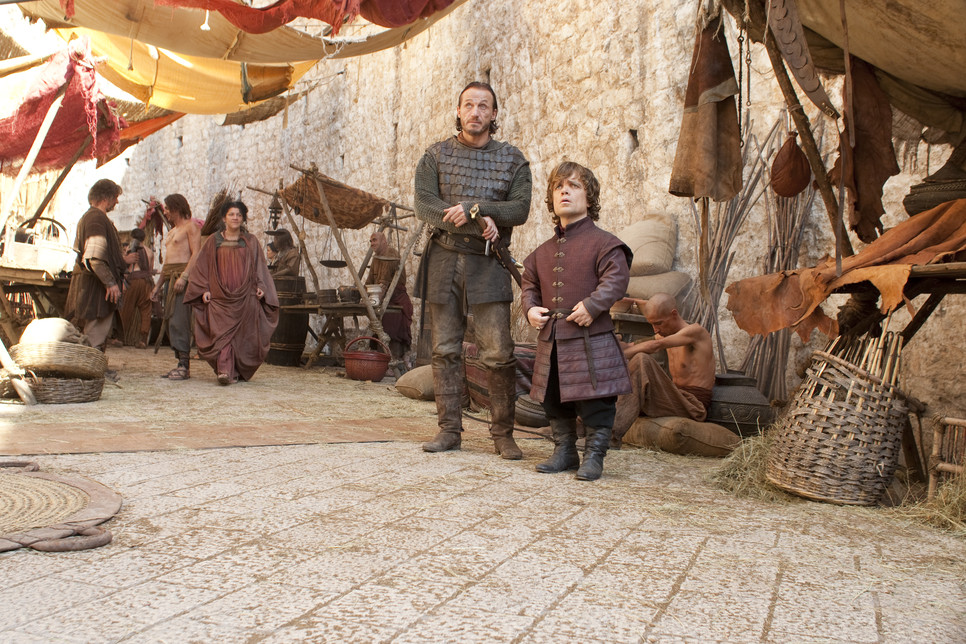 Tyrion escapes and, after a brief stint on the battlefield alongside his father, returns to King’s Landing with a new job (Hand of the King to his nephew Joffrey) and a new girlfriend (a prostitute named Shae). All in all, things seem to be looking up. But Tyrion’s luck quickly sours as old resentments with his sister Cersei fester. Tyrion’s promotion to Hand infuriates his sister, who has always craved the respect her father (begrudgingly) shows for Tyrion’s intelligence. When Stannis Baratheon threatens to besiege King’s Landing, Cersei is convinced that Tyrion has manipulated Joffrey into fighting in order to see him killed. In retaliation, Cersei orders an attempt on Tyrion’s life during the Battle of Blackwater Bay. That’s gonna leave a scar.

Adding insult to facial injury, Cersei tortures the woman she believes to be Shae, unaware that she’s got the wrong woman. Not wanting to tip her off, Tyrion plays along. “I will hurt you for this,” he says. “The day will come when you think you are safe and happy, and your joy will turn to ashes in your mouth, and you will know the debt is paid.” (Tyrion really gets all the best lines.) 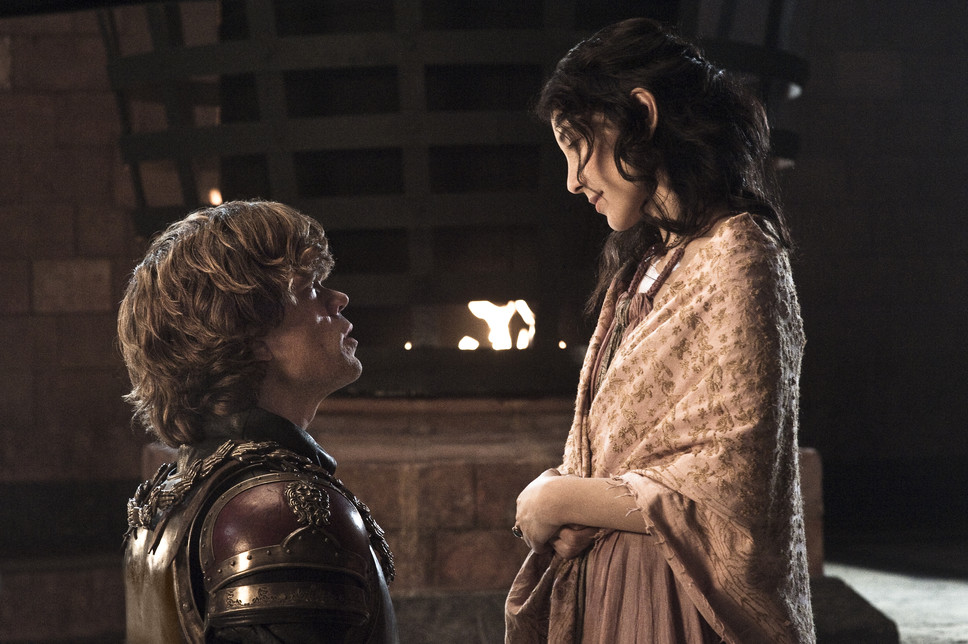 Later, Tyrion finds Shae and is relieved to see her unharmed. He keeps her hidden in the Tower of the Hand, and continues to do his best to govern despite his vicious nephew’s proclivities. When Stannis attacks King’s Landing during the Battle of Blackwater, Tyrion’s quick thinking saves the city, and he’s sure he’ll finally get the respect he pretends not to care about.

Shae It Ain’t So

To Tyrion’s chagrin, dad gets all the credit for the victory. Adding insult to injury, Tyrion gets demoted to Master of Coin, a position where his inexperience makes him bound to make mistakes, for which he can be blamed and punished. In other words, it’s a trap. Meanwhile, Tyrion’s very presence continues to rile Joffrey, whose bloodlust gets worse by the day.

When Tyrion is forced to marry Sansa Stark in secure the North for the Lannisters, they are both understandably upset, but he does his best to make the best of a situation neither of them wants. Tyrion treats Sansa with a level of kindness and respect she doesn’t expect from a Lannister, and they develop an affectionate friendship, built in no small part on their mutual hatred of Joffrey. 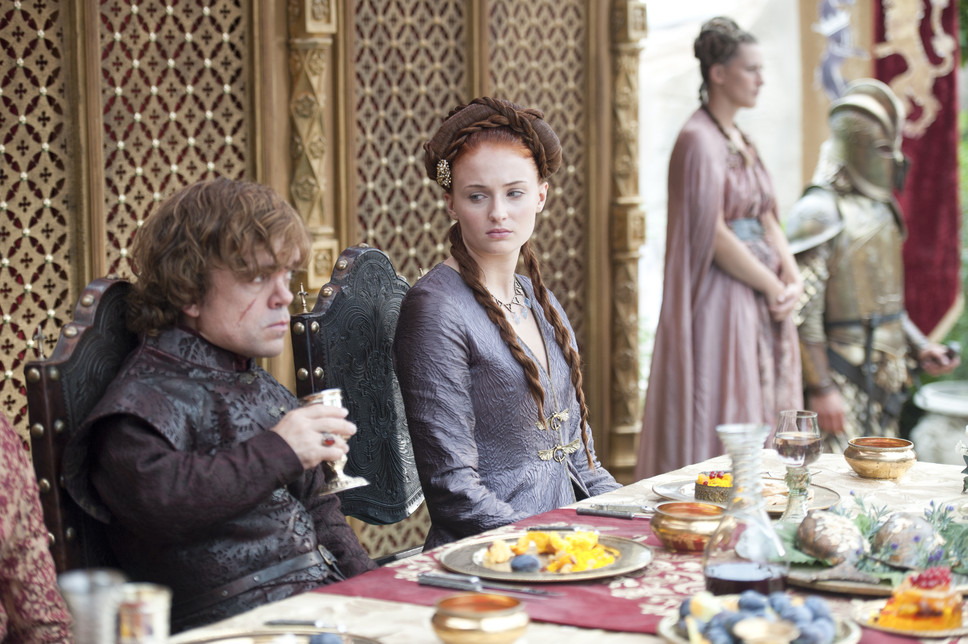 When Joffrey’s murdered at his own wedding feast, suddenly Tyrion’s in very hot water. He’s on record casually making threatening (though prescient) remarks about Joffrey’s safety, so when his new wife up and disappears, Tyrion looks fairly guilty. And of course, all those words come back to haunt him: Cersei doesn’t just suspect him; she’s out for blood. At the trial, Jaime advises Tyrion to plead for mercy and be sent to the Wall. Tyrion seems willing, until Cersei brings out her key witness.

Shae takes the stand and tells a litany of lies condemning Tyrion, who cannot contain his emotion at this utter betrayal, and gives an Emmy-winning speech (no – seriously) about it. Once again, he demands a trial by combat, but this time his champion, Oberyn Martell, is killed at the last moment.

Condemned to die, Tyrion still has a savior: his brother Jaime, who sets him free and arranges for Varys to smuggle him out of the city. Before departing, Tyrion pops by his dad’s room for a bit of closure, only to discover Shae, naked in his father’s bed, calling out for “her lion.” Distraught, Tyrion strangles her to death, then confronts his father in the privy with a crossbow. “You’re no son of mine,” Tywin gasps, as Tyrion shoots him with the first bolt. “I am your son,” Tyrion replies, “I have always been your son.” It’s a bloody final encapsulation of their entire relationship, and a bitter reminder of why Tyrion is so desperate to prove himself. Could you have said one nice thing to him, Tywin? Just one. 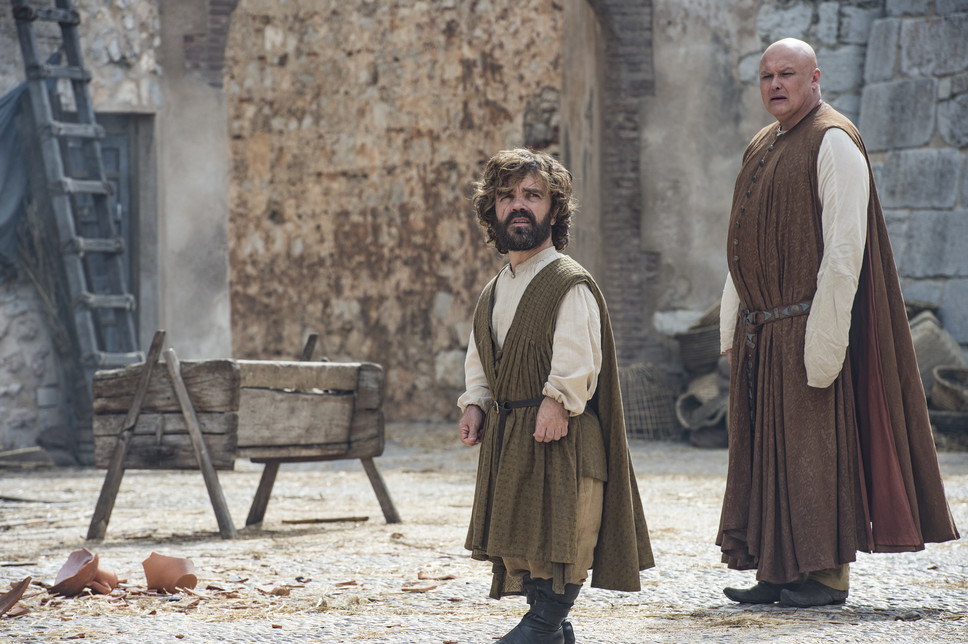 At this point, Tyrion’s in a pretty dark place. (Literally. Varys stuffs him in a crate and smuggles him to Essos.) Holed up for fear of Cersei’s retribution, Tyrion has a lot of time to reflect on things—his painful upbringing, his relationship with his father, his father’s recent…passing—and he’s come to a decision: it’s time to start drinking again. Who can blame him?

True to form, Tyrion’s pain makes him better at connecting with others. When he meets Daenerys Targaryen, Tyrion wins her trust by commiserating over how terrible both of their fathers were and how they both intend to do better. Over time, Tyrion comes to believe in Daenerys as a leader, and she, in turn, accepts him as her advisor, naming him Hand of the Queen. Tyrion guides Daenerys’s next steps in her conquest of the Seven Kingdoms, eventually bringing about her alliance with Jon Snow and their joint efforts to confront the Night King and the Army of the Dead. 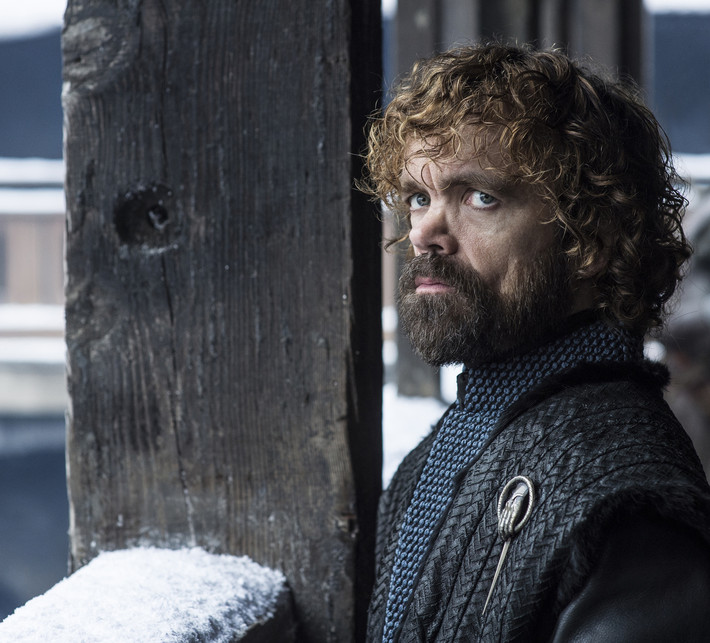 As the Great War approaches, Tyrion finds himself whispering in the ear of the most powerful woman in the world. When the Army of the Dead comes calling, the Targaryen dragons will be the most valuable weapons in Westeros, and Tyrion may find himself learning to strategize how best to pit fire against ice. But that’s just the beginning. If he survives—if any of them do—there’s still the game of thrones to be won, and his sister Cersei is not going down without a fight.

Then again, there was their curious off-screen conversation that culminated in Cersei falsely declaring a truce. Cersei and Jaime are expecting again, and Tyrion did love their last three children. Will that be enough to make their detente last? Or will old wounds be reopened when Tyrion realizes her trickery? Or, does the dubious look Tyrion cast towards Jon and Dany’s love nest in the season seven finale foreshadow yet another switch of allegiance? Remember Tyrion’s words from way back in season one: “I never bet against my family.”

Find out what the wars to come hold in store for this Lannister lion on the final season of HBO’s Game of Thrones, airing Sunday nights on DIRECTV.