When you play the game of thrones, you win or you die, and our girl Sansa Stark has proven very adept at not dying. After seven seasons of doing and saying whatever it took to survive, Sansa (Sophie Turner) has finally returned home with the power and self-assurance to lead in her own right.

She can’t swing a sword, can’t ride a dragon, can’t fly across time and space. She doesn’t even have Cersei’s red wine game. But Sansa does rule the castle where mankind will make its great stand against the Army of the Dead, and claims the allegiance of the North, the Vale, and the widlings. Not too shabby.

She’s survived the Great Game. With the Great War on its way, time will tell whether this consummate survivor will be one of the last left standing. Until then, let’s take a look back at how Sansa navigated her way from Little Dove to Lady of Winterfell. 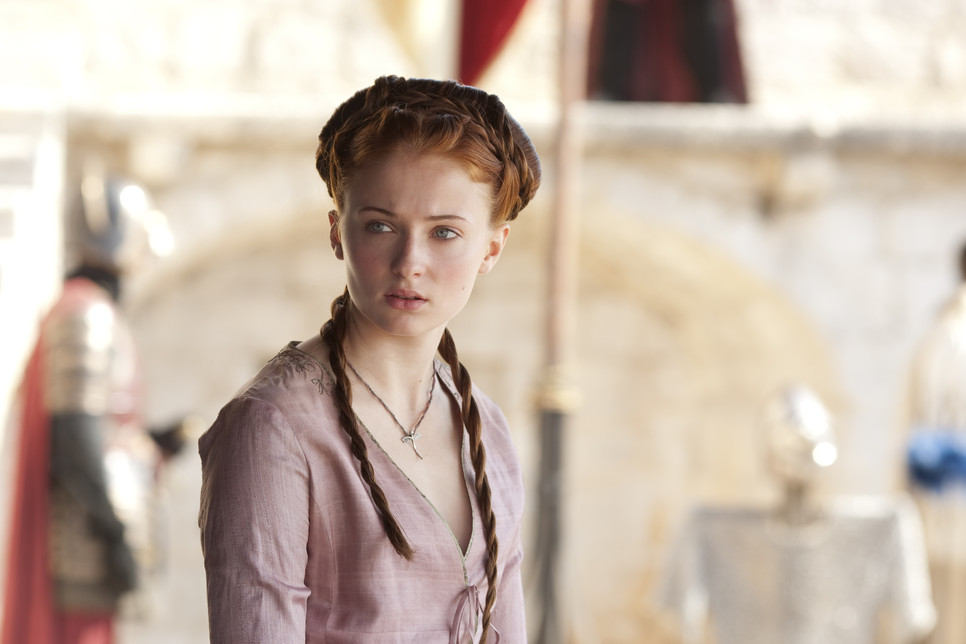 The elder daughter of Ned and Catelyn Stark, Sansa was everything that a young lady ought to be: beautiful, demure, obedient—and the complete opposite of her hellion sister, Arya. The Stark girls clashed over everything, especially Sansa’s betrothed, Joffrey Baratheon. To Sansa, Joffrey is the prince she’s always dreamed of. To Arya, he’s, well, Joffrey.

The more enamored Sansa becomes of their glamorous life at court and the idea of being queen, the less she sees Joffrey for the vicious little brute he is. Even when he has her direwolf killed, Sansa stands by him. This drives a huge wedge between Sansa and her family. But Sansa continues to cling to the fantasy that everything is fine—right up to the moment Joffrey calls for Ned’s head. All at once, her fairytale illusions come crashing down, and she’s faced with the Stark reality of just how vulnerable she has become.

Sansa knows that the only way she’s going to keep her head at King’s Landing is to keep playing the part. She feigns loyalty to Joffrey like it’s her job, even as she’s beaten, humiliated, and forced to look at her father’s decapitated head. It’s excruciating to watch, especially considering her silent self-flagellation for not leaving when she had the chance.

When House Tyrell arrive at King’s Landing, Sansa feels a glimmer of hope. With Margaery Tyrell occupying Joffrey’s attention now, Sansa will be released from their engagement and free to—never mind. She’s not free to do anything, as Littlefinger points out. Stepping down as queen-to-be just makes her a straight-up prisoner. He offers to help her escape, but Sansa, for good reason, doesn’t trust him.

Sansa befriends Margaery and her grandmother Olenna, to whom she confides the truth: Joffrey SUCKS. The Queen of Thorns and her granddaughter are disappointed but unfazed. They know how to handle men, even monstrous ones. Far from shrinking violets, the Tyrell women are world-wise and wily, and Margaery in particular becomes an important mentor to Sansa. To this point, Sansa’s only means of survival has been to grin and bear it. Margaery teaches her a better method: weaponize your beauty and rely on your wits.

Sansa hasn’t totally given up on the dream of a happy ending. She hopes that through her friendship with Margaery she might be able to wed Loras Tyrell and become Lady of Highgarden. Oh, Sansa. When will you learn? Instead, the Lannisters marry her off to Tyrion, who’s unexpectedly kind but not exactly the Prince Charming she had in mind. When news arrives of the death of her mother and brother, she’s inconsolable. By the time Joffrey’s murder forces her to flee the capital, Sansa is only too happy to run. Unfortunately, her savior is also The Least Trustworthy Man in Westeros. 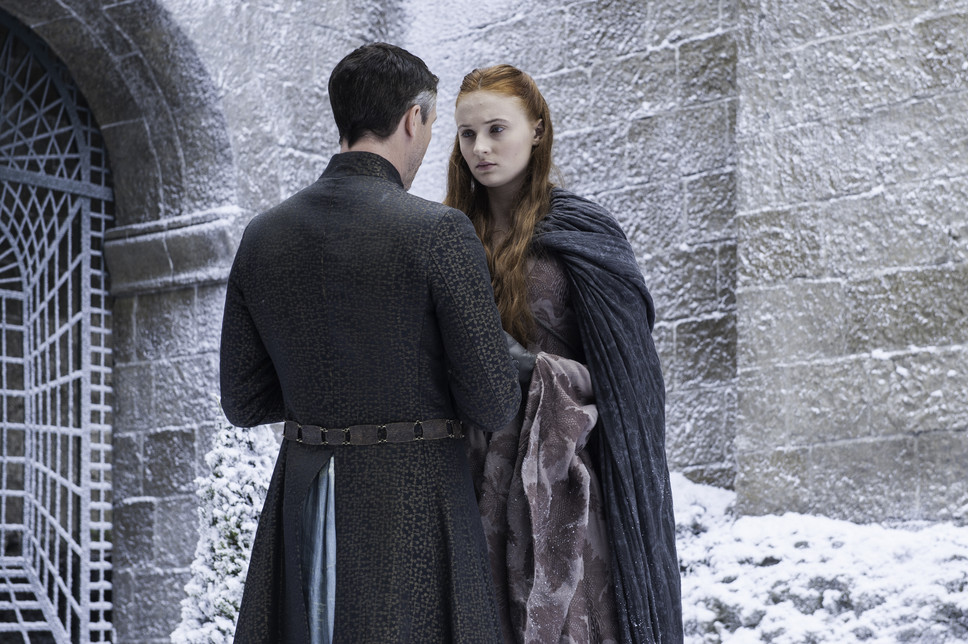 Things are Getting Eyrie

Littlefinger smuggles Sansa to the Eyrie—home of her mother’s sister Lysa, now his wife. Finally reuniting with family should be a source of great comfort to Sansa, but it’s immediately clear that these are her weird relatives. Tweenager Robin is still breastfeeding (yikes), and Aunt Lysa gets very Real Housewives on Sansa right away. Don’t touch my husband EVER. Sansa assures Lysa that she’s never slept with Littlefinger and never will, but you can tell Lysa’s still ready to toss a glass of Arbor Gold in her face.

Worse yet, Sansa has no clue what Littlefinger’s true motives are. She’s taken aback when, after waxing rhapsodical about how much he loved her mother, he plants a kiss on her in full view of Lysa. Crazed and jealous, Lysa tries to shove Sansa out the Moon Door, but Littlefinger intervenes, sending Lysa plummeting to her death. Sansa’s not sure whether to be grateful or terrified, but one thing is clear: never trust your creepy uncle. 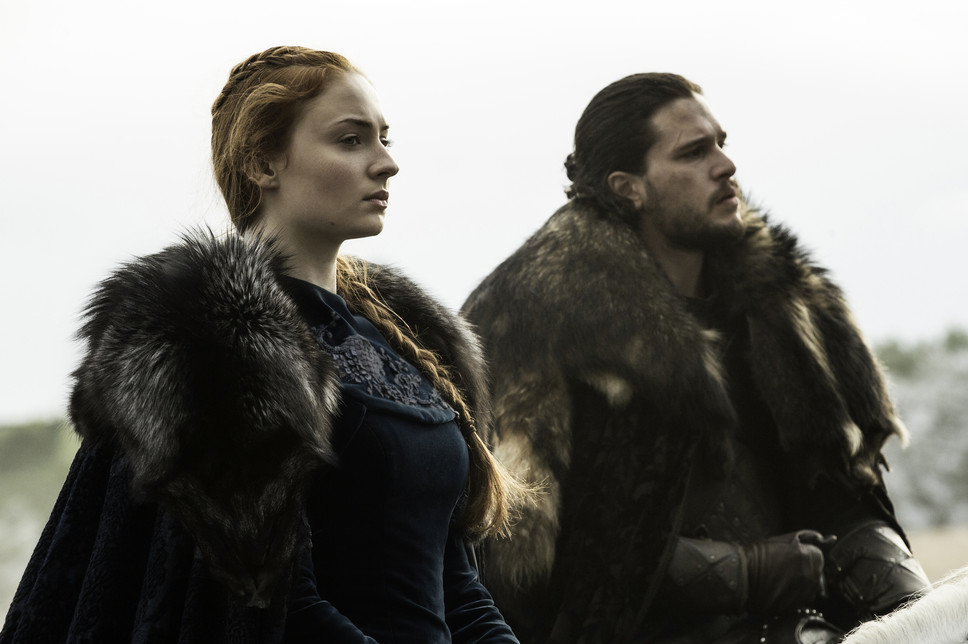 Sansa, the good news is you’re going home. The bad news is you’ve been shipped off to marry the only person in Westeros who might be a worse husband than Joffrey: Ramsay Bolton. Ramsay is a legit bastard (in every sense) who enjoys mind games, violence, and any and all combinations of the two. He brutalizes and violates Sansa every night from their wedding on, parading her in front of childhood companion Theon Greyjoy. Sansa initially spurns Theon, believing he murdered her brothers, but when he confesses Bran and Rickon are still alive, she starts to hope again.

At this point, you might wonder if Sansa is once again setting herself up for heartbreak; hope hasn’t been kind to her in the past. But this time is different. Sansa’s trauma has made her a grown woman, hardened but not jaded. Clinging to a last sliver of hope has made her resilient. With Theon’s help, she escapes the Boltons and makes her way to Castle Black to reunite with Jon Snow. 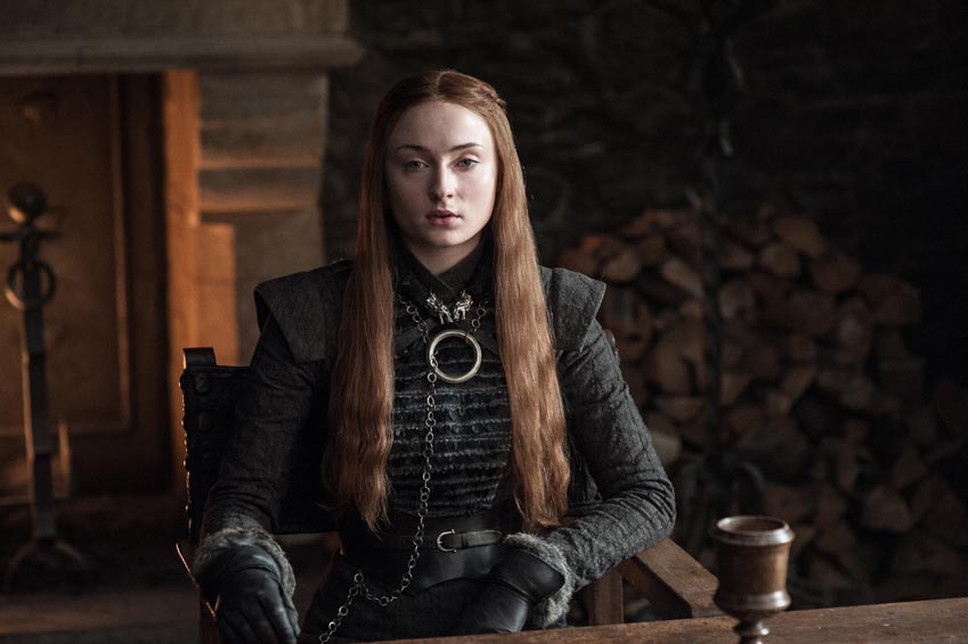 The Lady of Winterfell

Sansa and Jon decide to take back the North, but it’s easier said than done. They rally plucky and quite young bannerwoman Lyanna Mormont and her small company of soliders. Add that to Jon’s wildling army and it’s…still wildly insufficient. But Ramsay now holds their youngest brother Rickon hostage, so the Battle of the Bastards is on. Just when all seems lost for Jon and his men, Sansa swoops in with Littlefinger and the Knights of the Vale to turn the tide of battle for the Starks. As a cherry on top, she gets to be the one who feeds Ramsay to his own hounds. We see her stepping into her power at last, but the worry remains: was accepting Littlefinger’s help a devil’s bargain?

Very quickly, that worry proves legitimate. Littlefinger wastes no time before he gets to manipulatin’ folks again. After Arya returns home, it seems he’s made easy work of turning sister against sister. At an inquisition he thinks he masterminded, he stands smugly in the corner until it’s revealed that he’s the one in the hot seat. After six-plus seasons as a prisoner or a fugitive, this is Sansa’s transformative moment. She’s taken back her home, taken back her name, and now, finally taken back control from the man who has used her as a pawn for years. “I’m a slow learner,” she says, “it’s true. But I learn.” Sansa hands down the sentence, Arya swings the sword, and for once in his life, Lord Baelish is at a loss for words. 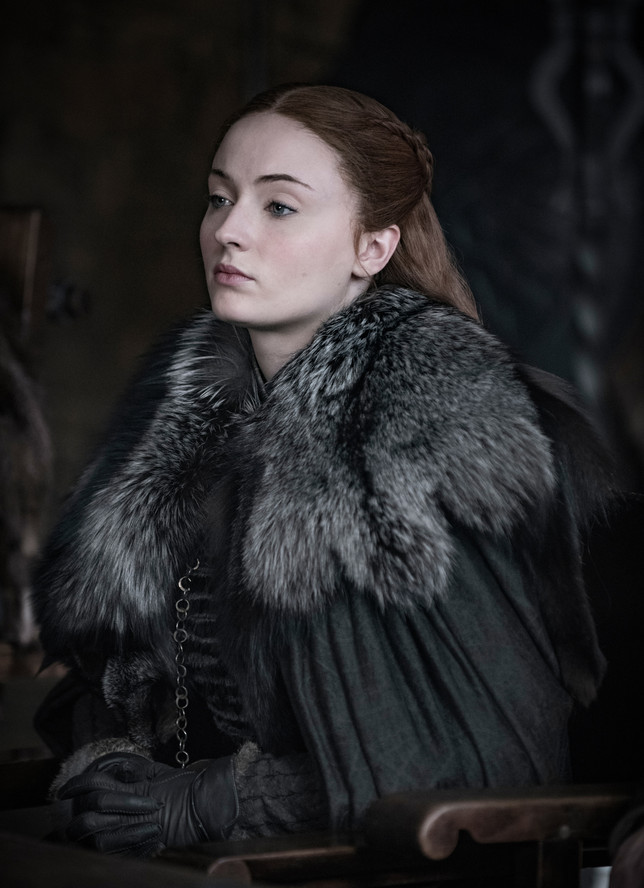 Sansa’s heading into the final season more powerful than ever. She’s taken her rightful place as Lady of Winterfell and proven herself an able politician. Now that the Starks are back together, she’s ready to take on whatever comes their way.

Still, it’s fair to wonder, can the Starks stay together? Sansa has become savvy and self-assured, but her transformation is fairly pedestrian compared to her siblings. (To be fair, Arya’s a world-class assassin and Bran’s the living embodiment of Time.) It’s not hard to imagine the other two Starks setting off to fight the Night King, leaving Sansa without her family yet again. And that’s before we get to her former half-brother but actually cousin Jon and his queen/aunt Daenerys Targaryen. Will Sansa follow Jon’s lead and bend the knee? Or will there be more auntie trouble in her future?

Find out Sansa’s fate in the wars to come on the final season of HBO’s Game of Thrones, airing Sunday nights on DIRECTV.