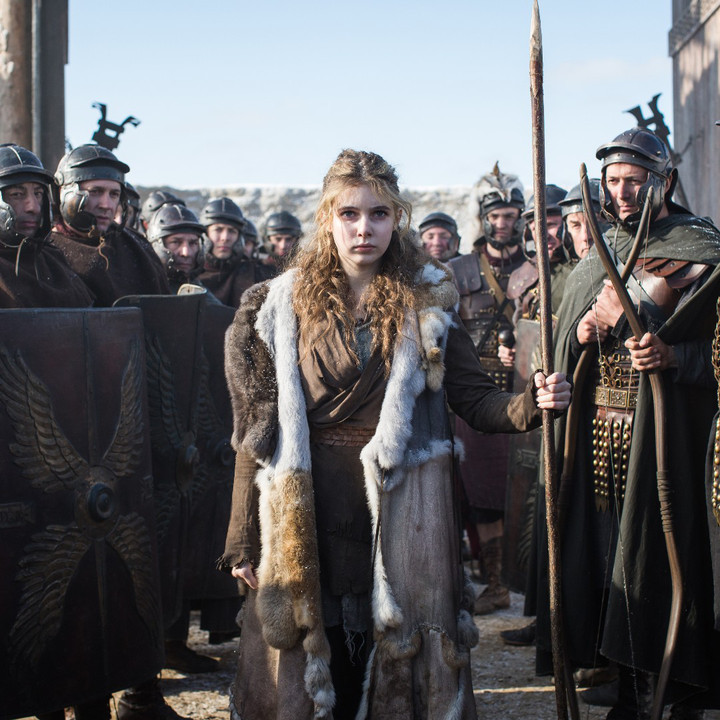 A Guide to Britannia Season 2

EPIX is continually producing some of the best original content on TV, from dark comedies like “Get Shorty“, to period pieces like “Belgravia,” to the excellent Batman universe show “Pennyworth.” One of its latest hits is “Britannia,” a show set in 43 A.D. at the height of the Roman Empire’s conquest of the world.

And if you’re just now discovering the show due to a well-placed curiosity click, welcome, and here are some things you should know to get caught up.

The show features a clashing of four different factions: the Romans, who were one of the most powerful groups in the world at the time; the Cantii, the Celtic people living in Britain before the Roman invasion; the Regni, a rival group of Celts; and the Druids, a class of priests, healers, and educators among the Celtic tribes.

At the heart of the show are two powerful women: Kerra (Kelly Reilly), the daughter of the King of Cantii (Ian McDiarmid), and Regni Queen Antedia (Zoe Wanamaker). Kerra and Queen Atedia are bitter enemies who must find a way to work together when the Roman Empire invades Britannia. Helping them along the way is a rogue Druid named Divis (Nikolaj Lie Kaas) and a 12-year-old Cantii girl named Cait (Eleanor Worthington-Cox).

Both Reilly and Wanamaker are renowned British stage actresses, in addition to starring in several high-profile TV shows. Reilly boasts credits from  “Above Suspicion,” “True Detective,” and “Yellowstone” on her resume, while Wanamaker can be seen on “Agatha Christie’s Poirot” and “Mr. Selfridge,” and a supporting role as Quidditch instructor Madam Hooch in  “Harry Potter and the Sorcerer’s Stone.”

While many of the characters on “Britannia” have been invented for television, there are several real historical figures in play as well. The head of the Roman Empire at the time was Emperor Claudius, played on the show by Steve Pemberton. His two military tacticians are the aforementioned Plautius and Vespasian. All three of those men were instrumental in the Roman invasion of Britain.

When the Romans successfully conquered the region, Plautius became the first governor of the new Britannia province from 43 to 46 A.D. He was replaced in 47 A.D. by Publius Ostorius Scapula and returned to Rome.

Vespasian would eventually take over as Roman Emperor after Claudius’ death in 54 A.D. Vespasian ruled over the Roman Empire from 54 A.D. to his death in 79 A.D.

Where “Brittania” Left Off in Season 1

As season one passes the halfway point, Kerra is crowned Queen of the Cantii — but it seems that General Aulus may have had more to do with her coronation than anyone knows. The new queen finds herself in a position to make a deal with Aulus to protect the Cantii people, but when Kerra finds out the general is trying to capture Cait, she helps Cait flee the citadel with her father, something that she will eventually pay for with her life.

As the season comes to an end, Aulus is working with Queen Antedia and the Regni to lay siege to the Cantii people. But because he’s primarily looking out for the Roman people, after the Regni help him, he tells Kerra, “Let me show you how the empire really works” and sets the Regni camp on fire.

Afterward, Aulus murders Kerra, and Amena (Annabel Scholey) is crowned the new queen of the Cantii with the Romans’ blessing. Meanwhile, Antedia is captured and thrown in a dungeon, and young Cait, who has been prophesized to save Britannia from Roman rule, is captured and handed over to the Druids. The season ends with Cait waking up inside a stone circle with mysterious runes carved into her forehead.

The second season jumps ahead two years, with the Romans firmly controlling the Britannia province. General Aulus and Amena are working together to try to get Celtic tribes to bend the knee — with dire consequences if they refuse.

Meanwhile, Cait is being trained by Druid Divis so that she can fulfill her prophecy of saving Britannia. But two Druid brothers, Harka and Veran (both played by Mackenzie Crook) are about to engage in an epic battle of wills that will divide the Druids and put Cait and Divis’ quest in jeopardy.

What Critics Are Saying

The response from critics has been overwhelmingly positive, with season two (which has already aired in the United Kingdom) receiving higher reviews than the first season, a rarity in television.

Of season one, Bill Watters of Bleeding Cool wrote, “It’s rare these days when a historically-inspired series properly manages to merge a modern sensibility into a period piece. ‘Britannia‘ manages to navigate the waters with a great cast.” And David Stephenson of the Daily Express wrote that if “Game of Thrones” was “too stuffy” for you, “Britannia” is “definitely your series.”

As for the second season, The Times critic Hugo Rifkind called it “an ethereal and wonderfully odd drama” and Suzi Feay of the Financial Times praised its “astonishing costumes and makeup, prop heads and limbs, brutal deaths, a jam factory’s worth of red goo, brilliantly offbeat musical choices pillaged from Sixties and Seventies electro-folk — everything has been ramped up for series two.”

If you are a fan of History’s “Vikings,” “Britannia” is definitely a show you should check out — and if you end up binging the latest episodes, don’t worry; the show has already been renewed for a third season.